A Call For Help: Community Rallies Around Neighbors Who Need Support

SCHUYLERVILLE — The community of Schuylerville is coming together to help neighbors recover from two events that have affected the Schuylerville Central School District family.

The Schuylerville junior varsity and varsity football teams will be trading in the pigskin for golf balls on Saturday, Oct. 18 to help support the Bateman family. Jack Bateman, father of team member Skyler Bateman, is recovering from a serious motorcycle accident that happened in August. Jack Bateman is making progress at Sunnyview Rehabilitation Center after spending five weeks in Albany Medical Center’s Intensive Care Unit but according to his family, he still has a long road ahead of him.

The football teams will host a fundraiser at the Sunnyside Par 3 Golf Course in Queensbury to help the Bateman family pay for medical costs. Each player is collecting sponsors and will play nine holes of golf in the “best ball” or “scramble” format. All proceeds will go directly to the Bateman family.

“Not only is this an effort in helping a friend and family in need, it’s also a way to give back to someone who has given a great deal of his time and dedication over the years, especially to the youth football program,” said Laurie Griffen, Schuylerville parent. “It’s a chance to support a teammate and give back to someone who’s given to them.”

The fundraiser will begin with a shotgun start at 1:30 p.m. and food and drinks will be provided.

However, the golf game isn’t the only fundraiser the Schuylerville Central School District has going on this weekend. The school community is also showing support for one of its teachers – Mrs. Penniman.

Penniman, a fifth grade teacher, lost her house to a fire on Saturday, Sept. 27. Flames had fully engulfed her one-story home by the time fire crews arrived on scene, destroying the home and killing three pets – one dog and two cats. The Penniman family was not injured but they did lose all of their possessions.

On Friday, Oct. 3, Schuylervile students and staff wore red to show their support for the Penniman family and to highlight the importance of Fire Prevention Day. Principal Gregg Barthelmas and Mrs. Penniman’s fifth grade team presented her with generous donations that the elementary school, middle school and high school collected.

If you would like to help the Penniman family, the SCSD faculty and staff are hosting a Spaghetti & Meatball Dinner on Saturday, Oct. 18 at the Schuylerville American Legion.

Friends of the Penniman family have also set up a Go Fund Me account called the “Penniman House Fire Fund,” with a goal of raising $2,000 for the family; the account has already collected just over $1,300.

To make a donation, visit www.gofundme.com/f70yfk.

LAKE GEORGE - “Come on, mom, let’s go on the Steamin’ Demon!” Cameron, one of my twin boys, is pulling me in the direction of one of the things my nightmares are made of. The “Steamin’ Demon” is more than 15-hundred feet of winding heavy steel track. The car it facilitates carries its passengers up, up, up toward the sky before dropping them down, down, down- over and over again. As if that isn’t scary enough, it also features a single loop and a double corkscrew. That’s where I draw the line. I refuse to fly upside down, even for a matter of seconds, even for the most important people in my life.

Now, there was a point in time when I, too, could be labeled an adrenalin junkie. Those were the days of FOX-TV News live shots, skydiving and other risk-taking behaviors. Those days, however, ended when my twins’ lives began. I started thinking more about consequences than thrills when I became a mother.

Realizing I am going to need an alternative in order to prevent a meltdown, I divert Cameron’s attention toward the Alpine Bobsled. I don’t feel too badly about it, noticing his brother Jordan doesn’t appear at all anxious to attempt the monstrosity that is the Steamin’ Demon, either. He’s cut out of a much more subdued cloth than his fraternal twin. For this, I give thanks nearly every day.

We wait in line in the hot late summer sun for at least a half an hour. I am wiping the perspiration from my face as we finally load into our bobsled. This is a completely original roller coaster ride here at The Great Escape. According to the park’s website, “there is no track at all – you simply speed-glide like a bullet down the mountain, on a smooth high-walled course that is identical to what the Olympians ride.” I scream the entire time, as forcing the loud sound out of my body seems to force out the butterflies, too. This is highly entertaining for my children and clearly adds to their satisfaction.

The boys and I have season passes to this popular Lake George amusement park, which come in handy on those days when I don’t want to blow the entire price of admission on just the few hours we have to spare. Today is a “Get a friend in free” day. Though I contemplated bringing along one or two of the boys’ friends, I ultimately decided just to keep it to the three of us. I’m not unhappy with my decision. It turns out to be a great opportunity for me to spend quality time with my little men before they head back to school.

Other than the half-hour wait time for the Bobsled, we are able to navigate the rides pretty quickly. Marshal’s Stampede indoor bumper cars, The Blizzard (scrambler), and Screamin’ Eagles are all big hits. The Raging River offers a refreshing cool down, and it is just my speed, carrying us relatively smoothly through the rapids.

Just before the boys hit the wave pool in the water park, I give them their “last ride” warning. This always seems to ease the shock of an ending. It certainly does today.

Our bathing suits dry on the walk back to the car, and we are still wearing them as we take the short car ride just a few miles North to the Adirondack Pub and Brewery. Located right on Canada Street, just across from Fort William Henry, it is easy to find. It’s easy on the eyes too, tastefully decorated in the traditional, rustic Adirondack style.

John Carr opened the popular restaurant fifteen years ago, and is proud of the some fifteen different beers they brew right on site. I’m here with 8-year olds, so we sample the root beer offered on tap. Carr explains that they add “extra winter green oil and less vanilla than typical root beer, giving it a lighter flavor, and making it more popular with kids.” Pure cane sugar and honey are added instead of high fructose corn syrup, making it a relatively healthy choice, too.

In spite of the fact that it’s a brewpub, I find it to be a family friendly place, something else Carr is proud of. “It’s nice because mom can get a salad, dad can grab a beer, and the kids can have fun,” says Carr. My two sure do, wolfing down their pasta and chicken nuggets in record time, agreeing they’ll fondly remember our late summer Great Escape long after they’re back in the classroom.

The Great Escape is open weekends through November 2. The Adirondack Pub and Brewery is open weekends all year long and seven days a week during the summer. Visit sixflags.com/greatescape and adkpub.com for more information.

Carrie Rowlands Johnson is a writer/blogger. She previously reported for Fox 23 News. You can read more at: http://carowlands.wix.com/carrie-rowlands 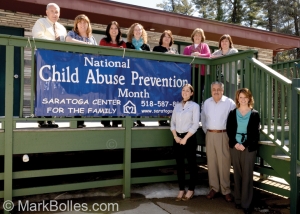 SARATOGA SPRINGS – The Saratoga Center for the Family is a major community asset, yet many county residents are not fully aware of the incredible array of services they provide. This is the first of a multi-part series about the Center and its activities.

Simply put, there is no better time to explore The Saratoga Center for the Family (SCFF) than the month of April.

“This month, SCFF encourages all individuals and organizations to play a role in making Saratoga County a better place for children and families.” Ms. Wormley continued.

As such, they have developed and coordinated a series of activities throughout this month. The schedule appears at the end of this story.

But the larger point is that SCCF makes Saratoga County a better place for children and families year-round. The actual statistics of people whose lives are stronger because of SCFF are nothing short of staggering.

But the numbers tell only part of the story. In our next segment, we’ll take a look inside SCCF and their activities that for 37 years have been geared to one goal: building stronger families.

April is National Child Abuse Prevention Month. The following activities and events have been created to promote Child Abuse prevention and awareness throughout Saratoga County communities:

Throughout the month of April

Sunday April 6 – Uno’s Dough Rai$er­ The Saratoga Uno will donate up to 20 percent of your lunch or dinner check to Saratoga Center for the Family. Diners need to present a ‘dough ticket’, which can be downloaded at: http://bit.ly/1eZAZtN

Crime Victims Candle Light Vigil ­ The Crime Victims Vigil is an opportunity for crime victims, their families and friends to come together to share their stories and experiences with the community. The vigil starts at 4p.m. at the Presbyterian New England Congregational Church in Saratoga Springs. District Attorney James A. Murphy III’s Crime Victims Unit brings this to the community.

Monday, April 7 - Split: Divorce Through Kids’ Eyes ­ Told from the perspective of children ages 6-12, this 30 minute documentary explores the impact divorce has on a child's mind and heart as their families change. This film and discussion is for parents who are divorced along with their children. SCFF Clinical Director, Kelly Barry, will lead a discussion following the viewing. 6:30 to 8 p.m. at Saratoga Springs Public Library.

- The Donny Elvis Show ­ Enjoy a night with ‘The King’ impersonator, Donny Elvis, at the Knights of Columbus Hall, in Saratoga Springs at 5 p.m. Tickets are $15 and proceeds benefit SCFF. Presented by Ct. McLaughlin #422, Catholic Daughters of the Americas.

Tuesday 4/22 - Alex and Ani: Charity By Design ­ Between 7-9 p.m., the Saratoga Alex and Ani store will donate 15 percent of all proceeds to Saratoga Center for the Family.

SARATOGA SPRINGS —The second annual Saratoga Mom Prom—a ladies night out—to benefit Saratoga County Children’s Committee is April 26 from 7 p.m. to 11 p.m. at The Saratoga Hilton.  Pull out your old prom gown or bridesmaid dress (or head to a consignment shop), accessorize in your era of prom and come join the fun. There will be dancing, lite fare, raffle baskets as well as prom activities.

Register for $55 and learn more at www.saratogamomprom.com or call (518) 587-5392.  Benefit a great cause and have fun reliving your prom memories. Age 21 and up are welcome and you do not need to be a mom to attend.

Saratoga County Children’s Committee serves the needs of children throughout Saratoga County.  It is a completely volunteer organization and without a paid staff, 100 percent of monies donated are spent to provide relief to children in need.

The SCCC’s greatest effort is The Empty Stocking Project that provides over 800 children with holiday gifts. Requests are received from agencies such as Domestic Violence Services, EOC, Franklin Community Center, Project Lift, Saratoga Early Intervention, Saratoga County Social Services as well as Nurses in Saratoga County Schools. Throughout the year, the Committee provides such items as clothing, cribs and baby supplies, school supplies and sports equipment, along with special needs such as medical supplies and equipment and dental work.

New members are always welcome.  At this time, there is a need for volunteers willing to   sponsor a child for The Empty Stocking Project.  To volunteer for membership or to sponsor a child, call (518) 587-1236.