‘Killer’ Car Up For Auction: Christine – The Movie Car

SARATOGA SPRINGS — A sleek 1951 Nash-Healey Series 25 Roadster - the first post-war sports car from a major American manufacturer, a classy 1931 Ford Model A – which features a classic “Ah-Oo-Gah” horn, and a 1958 red-and-white body hardtop which famously performed on the silver screen will be among the hundreds of cars at the fourth annual Saratoga Auto Auction in mid-September.

Billed as “an auction experience unlike any other,” the 2020 Saratoga Motorcar Auction takes place the Saratoga Automobile Museum Sept. 19.

“We’re going to have between 250 and 300 cars, and there will be three different bidding platforms,” says Bill Windham, auction director for the museum.

Perhaps the most notable, if not the most outright notorious is the 1958 Red and white two-door Plymouth Fury hardtop with automatic transmission and red vinyl and cloth interiors.

Bearing “her” famous CQB 241 license plate, Christine is burned into the memory of millions of cinephiles and book-lovers alike - screaming across street corners, battering architecture to fiery structures of rubble, and coming back from the dead in the 1983 film directed by John Carpenter, and the Stephen King novel that bears her name. In both book and film, she is vengeful, doesn’t take kindly to being disrespected and in every way lives up to her “Fury” name.

“This here is the best car I ever owned. Bought her in September 1957,” says Roland D. LeBay, an old man with a bad back introducing himself as a character in King’s novel, while reminiscing about the first time he laid eyes on Christine.  “Brand-new, she was…red as a fire-engine on the inside.”

When Carpenter set out to make the film and match the vehicle King had placed as the lead character of his book, he reportedly placed ads across California searching for models of the car, eventually securing more than a dozen.

“With a lot of movie cars, depending on the shot and how it’s being utilized in the movie, it may just give the appearance of being the same car,” Windham explains. “Depending on the stunt it may have roll bars in it, it may not even have an interior in it - but this car is, inside and out, the real car. It is thoroughly documented as being one of the movie cars. The director of the movie used this car to go back and forth to the set, and it was used in some of the shots.”

Previous auction years by the Saratoga Automobile Museum have featured two-day bidding events, with staging at Saratoga Performing Arts Center. This year, vehicle check-in and on-site bidder registration begins Sept. 15. Preview day is Sept. 18, and the auction itself will take place during one, long, single-day event, which will run from 9:30 am until 6 or 7 p.m., and take place at the Saratoga Automobile Museum on Saturday, Sept. 19.

Bidding may be done in-person, by phone, or online.

The event will be streamed live so people may watch online via the Saratoga Automobile Museum website. All proceeds go to the museum in what is the largest generator of revenue the museum directs during the year.

For more information about the auction and how to register to bid go to: www.saratogaautomuseum.org. 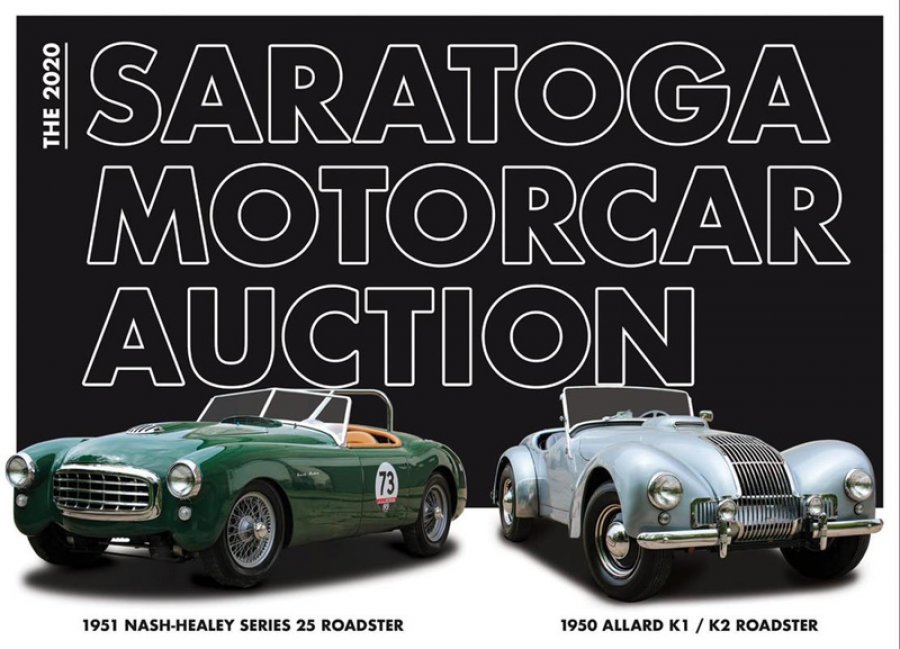 SARATOGA SPRINGS — The Saratoga Automobile Museum has announced that it will host a drive-in consignment day at the Museum on Saturday, July 11 to promote the upcoming fourth annual Saratoga Motorcar Auction taking place this September.

“Our drive-in consignment day is a great opportunity for prospective consignors to go through the consignment process in-person with our amazing team,” said Bill Windham, auction director of the Saratoga Motorcar Auction.

Appointments for the drive-in consignment day are not required but are encouraged by either e-mailing This email address is being protected from spambots. You need JavaScript enabled to view it. or by calling 518-401-5180.

Additional dates include July 25, August 1 and August 15. The Saratoga Motorcar Auction, now in its fourth year, will take place Friday, Sept. 18 and Saturday, Sept. 19 on the stage of the Saratoga Performing Arts Center. In the auction’s third year, nearly 300 vehicles were part of the event. This year, the auction will feature incredible rare and classic vehicles and automobilia. The Auction is the largest annual fundraiser for the Museum’s exhibit and educational programs.

Per New York State and CDC guidelines, facemasks and social distancing will be followed and required to ensure the safety of our attendees, staff and volunteers.

To consign, register to bid, or to learn more about the Saratoga Motorcar Auction, please visit saratogamotorcarauctions.org.

SARATOGA SPRINGS  - The Saratoga Automobile Museum's huge Spring Auto Show and Family Fun Day, the traditional kick off of the summer car show and cruise in season, is drawing an unprecedented number of pre-registrations and show organizers are expecting the biggest turnout ever – for both cars and enthusiasts – at the museum's annual fund raising event for its many educational programs.

Set for Saturday, May 14 on the huge show field in the center of the scenic Saratoga Spa State Park, the show will run from 10 a.m. to 3 p.m. Show admission, as always, will include a visit to the nearby auto museum, where the "Real Steel: Stories of Automotive Archeaology" exhibit is in its final month before yielding the Golub Gallery to the highly anticipated "POSEY: Shifting Through the Creative Life of Sam Posey" exhibit, which will open in mid-June. General admission is $10, day-of-show registration is $15 – each registration includes admission for the driver and one passenger.

Another bonus for attendees is the traditional exhibit of the Atlantic Coast Old Timers’ vintage race and sports cars from the Mo-Hud Region of the Sports Car Club of America in front of the auto museum.

New for 2016 will be the opportunity for area youths to be involved with judging of the auto show under the sponsorship of Hagerty Insurance and the "Adirondack A's" car club.

The "Adirondack A's" Model A Ford club provides "hands on" learning experiences for area teens through a yearly vehicle rebuilding project, with the students and their mentors set to display and discuss a 1931 Model A deluxe roadster that is being totally restored.  A select group of the teenagers will take time out to work with the judges of the show's four marque classes.

Additional Family Fun Day activities will include dental screenings at the Ronald McDonald Care Mobile, a huge mobile dental facility staffed by the St. Peter's Hospital Dental Center staff, demonstrations on proper car seat installation by representatives of the Cornell Cooperative Extension program, Saratoga County Sheriffs with a display of Patrol Car technology and members of the regional Ford Model T Club with the Model T Experience.  When you get hungry, there will be plenty of food vendors to choose from including Stewart's Shop and their delicious ice cream!

The featured marque classes for 2016 will include Model T Fords, Model A Fords, Pre-1972 Muscle Cars and Pre-1949 Street Rods, with entries arrayed around the Reflecting Pond adjacent to the huge "cruise-in" field.

Judges will select winners in the four marque classes while 20 SAM's Choice awards will be presented to the top "cruise in" entrants.  Other awards up for grabs include the highly competitive People' Choice trophy, the Kid's Choice award from the student judges and the prestigious Best in Show trophy.

More information on the Saratoga Automobile Museum, including its many activities, lawn shows and educational programs, including the nationally recognized Distracted Driving program, can be found online at www.saratogaautomuseum.org, where registration forms are also available.