How many of you like to eat breakfast foods any time of the day?  As a child, one of my favorite breakfast items was and still is waffles. I love the smell of cooking waffles when you walk into the kitchen. One of our family treats was waffles on Sunday morning. My mother would offer to put blueberries, strawberries, bananas and various fruits on our waffles. I have always loved waffles’ crispy wafer surface, soft interior and tiny golden pockets filled with maple syrup. The waffles of my dreams (and by now you realize this is nearing psychedelic-flashback territory), include the proper waffles are dark golden brown, crisp and served with butter melting into the square holes, maybe a salty pork product nearby such as bacon and real maple syrup. I would beg for a scoop of ice cream on top – but that idea was quickly nixed.

Waffles have been a favorite food for hundreds of years, possibly dating back to the 13th Century. Although Waffles were brought to Pennsylvania centuries ago by German settlers, they are experiencing a modern-day comeback that extends long after sunrise. There are many new food concepts out there that include creative approaches to waffles as an all day food. It is safe to say that Americans have developed a bit of a fascination, perhaps an obsession of making waffles a novelty breakfast item to decadent masterpieces. The first waffle irons with the characteristic honeycomb pattern appeared in the 1200’s when a craftsman designed and forged cooking irons. Original irons featured a hinged design. Consequently, the batter was poured in, pressed together, and cooked over an open hearth fire. Making crisp and fluffy homemade waffles has gotten easier since the days when you had to hold a long-handled waffle iron in the fire to get them perfectly browned. Modern waffle makers require little more effort than plugging them in and heating them up, but it can take a little practice to effortlessly turn out golden grids that pair perfectly with real maple syrup or crunchy fried chicken. A generously oiled and preheated waffle maker should produce an irresistible result every time.

We carry several types of Waffle makers by All-Clad. The All-Clad Waffle Maker cooks generous Belgian waffles at the same time. It features advanced heating technology for homogeneous browning; moreover, 7 levels of browning are possible. The steam release system prevents condensation buildup as waffles bake, for crispy outside and fluffy inside waffles. The ready to cook light signals when to add batter and the audible signal indicates when waffles are ready. The non-stick plates are easy to clean. An overflow batter tray put at the back of the cooking plate avoids mess. Another option is the delicious round waffles.

I never met a waffle I didn’t like. After hearing the ways waffles can answer the never-ending “What’s for dinner?” question or liven up a winter party, you’ll never look at a box of Eggos the same way again. Who says waffles are just for breakfast? You could eat them for lunch, dinner and dessert too. Here are some ideas:

Chicken and Bacon Waffles: Call it a meat-lovers waffle. Top your waffle with fried chicken and crispy bacon, and even mix bacon into the waffle batter. Save it for a lazy Sunday morning when you don’t have to leave the couch too quickly.

Waffled Brioche French Toast: If you’re the type who always waffles (har har) between French toast and waffles on the diner menu, you can get the best of both worlds at home. Pop a chunky slice of brioche in the waffle iron, and you’ll wind up with crispy divots (perfect for flooding with syrup) and maintain the fluffy, chewy texture typical of French toast.

Waffled Banana Bread: Banana bread is another morning favorite that can get a waffle update. Pour banana-bread batter straight into the waffle iron for a treat that’s both new and familiar — and cooks in way less time than typical banana bread.

Breakfast Grilled Cheese: Waffles to-go sounds like a trick until you realize that two waffles can sandwich all the gooey stuff (cream cheese and jam) inside for a handheld breakfast.

There are so many options to make with a waffle maker. Stop by Compliments to the Chef, your Neighborhood Kitchen and Cutlery store located at 33 Railroad Pl. to pick up the essentials to make culinary delights. Have fun in the kitchen; tell that special someone they are “Waffle-y Cute.”  Remember my Foodie Friends “Life Happens in the Kitchen.” 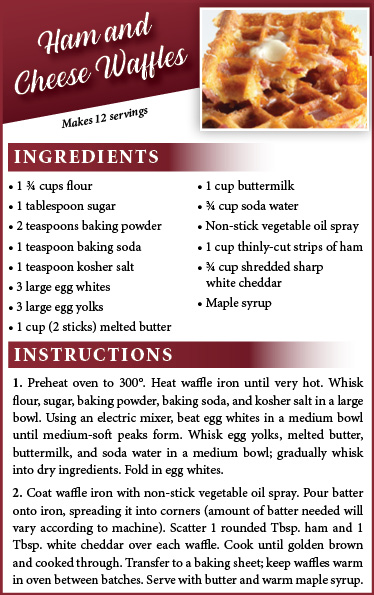 More in this category: « Hole in the World Bring on the Corned Beef and Cabbage »
back to top