ON YOUR BREAKFAST plate, right next to the bacon, is a spot for blueberries.  In the town of Bacon Hill (15 minutes from Saratoga) on a little side road named Winney Drive, is Winney’s Blueberry Farm.

The road was named after his grandfather in the 1920’s but it was Byron Winney’s parents who began growing blueberries there in the 1970’s. They started out with gladiolas (still Byron’s favorite flower) but after thirty years, his father decided to switch over to selling the abundant fruit.

“My father didn’t want to be bothered with something he couldn’t eat,” said Byron.

Sitting down on a wooden glider inside the simple red farm stand near the yellow center-hall colonial home circa 1790, Byron surveys the 85-acre farm as we talk. Birds race by, resting only momentarily in the rafters before rushing out into the open air as a steady stream of people come to harvest the happy fruit from the largest farm of its type in the region.

“Nobody has as many as I do,” said Byron.

The reason why Winney’s Blueberry Farm grew as it did is largely because of Byron’s rebellious attitude. Needed to deliver flowers, he and his brother Bernie learned to drive as soon as they were old enough to turn over the flywheel to start the engine, he said.

“It was hard. When you’re 11 years old, it weighs more than you do,” said Byron.

The hard work, however, wasn’t as tough as his mother, who ruled the farm so strictly and with such an iron fist that she earned the nickname “Iron Lady.”

How Byron watched over the 5,500 blueberry plants they planted was something she could always find fault with. As a result, during her lifetime he instead spent his days working at Niagara Mohawk. When she died, he planted 18,000 bushes.

The cost of creating the royal bluish-purple color pigment of paint was so exorbitant to artists working in the old world that blueberries were called “the fruit of kings.” Today, they have maintained this reputation because their high antioxidant value has placed them securely on the superfoods short list.

“I’m going to live to 120 years old because I eat a lot of blueberries,” said Byron.

He and Bernie snack on them as they tend the plants, grabbing a handful and popping them into their mouths one after another. Byron also likes when someone cooks him a nice blueberry peach pie, he said.

Byron is treated like king on the farm, greeted jovially and with the utmost respect because of everything he’s learned about how to grow the best blueberries.

“I bought every book I could on the subject and anybody who knew anything about it, I’d ask,” he said. His day starts early, runs late and the work continues year-round. When he’s not pruning the now 40,000 bushes on the property, Byron’s attending a parade of growers' meetings throughout the Northeast.

The best advice he’s heard is something that can benefit any grower.

“pH, pH, pH! Make sure there is 4.5% pH and prep a year ahead,” said Byron. “Sour the soil” (add sulfur to make it more acidic) and you can get your bushes to produce fruit in five years, compared to the typical 7 to 12, he said.

With agricultural businesses, there are always variables out of one’s control. Bugs, the weather and songbirds were decimating his crops (until he added bird alarms).

“I hire as many as I can get, which is half of what I need,” said Byron.

The hardest workers on the farm perhaps, are 25 hives of bees.

“It’s pure magic. They did a good job this year. I’m amazed they got all these plants pollenated,” he said.

Jars of honey are for sale at the stand, along with freshly-picked quarts of that day’s best varieties.

Winney’s 25 varieties of blueberries include Old Standards Duke, Blue Ray, Collins and Jay. The new Aurora extends the growing season with berries that burst onto the scene in September with fabulous flavor.

“I see a lot of smiles and happy people. It’s always a good time,” said Byron.

He’s seen people start as early as 6 a.m. to pick as many as 30 quarts to freeze and last all winter.  In an ideal world, they would find a bush they like and pick it clean before going on to the next, he said.

“When you start tickling a bush, it encourages growth and picking it clean, there’s less chance of having so many on the ground,” said Byron.

The average person spends about an hour on the farm, driving to the fields only to end up picking from the same outside edge bushes that get chosen time and again.

Having a Bear of a Time

Animal scavengers usually prefer the fields of grain, oats, rye and barley surrounding Winney’s but they do get turkeys, deer and bears.

“Believe it or not, we have bears all the time. They’re curious animals but they don’t create any problems,” said Byron.

Petting the 18-year-old one-eyed tailless farm cat Max, Byron said that after he recovers from the hip replacement surgery he needed after a fall in September, he’ll build a packing house and buy a machine that will pick the berries.

What he’s been doing so far however, has been working. 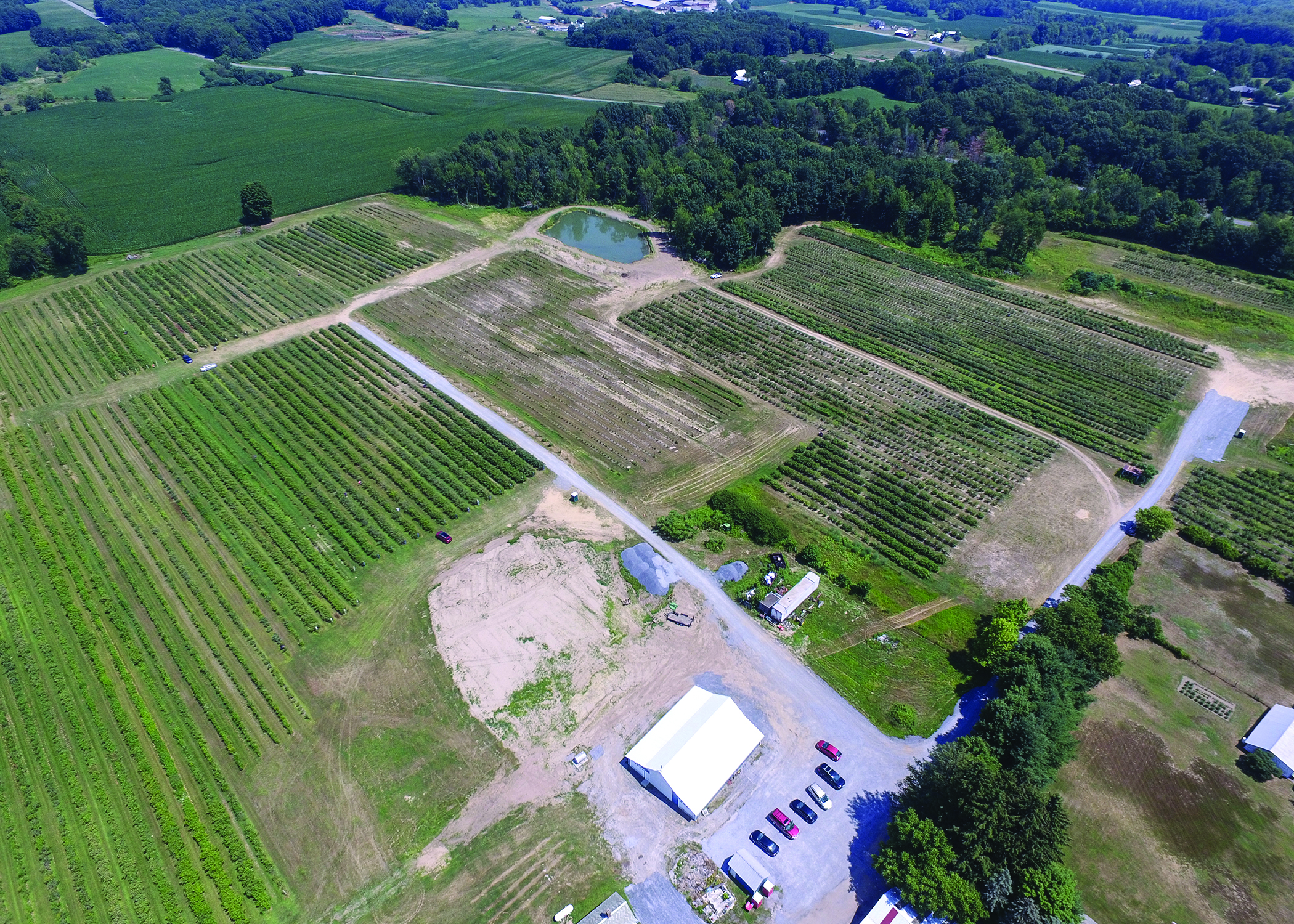 View the embedded image gallery online at:
https://saratogatodaynewspaper.com/sections/food/item/8789-sitting-down-at-winney-s-blueberry-farm#sigProIdf282138104
More in this category: « A Celebration of Summer’s Sweetest Berry Take a Road Less Traveled...to Schuylerville for Delicious Fare »
back to top