Earlier this year, the Saratoga Springs Public Safety Department applied for a Federal Emergency Management Agency (FEMA) grant for funds for additional firefighters for the city, primarily to staff the new fire station being built on Henning Road. The proposal was to fund sixteen new firefighters for three years. The good news is the application was successful, and FEMA awarded the city $4,154,523.52. The bad news is the city may not actually be able to afford this grant.

The problem with the grant is that the city must maintain all these positions using city money for the two years following the end of the grant.

In addition, as this page from the award letter documents, the grant funding is only for salaries and benefits. Uniforms, training, etc., are not included, so these costs for the 16 new employees will have to come out of the city budget during the years of the grant. This is a breakdown of salaries: 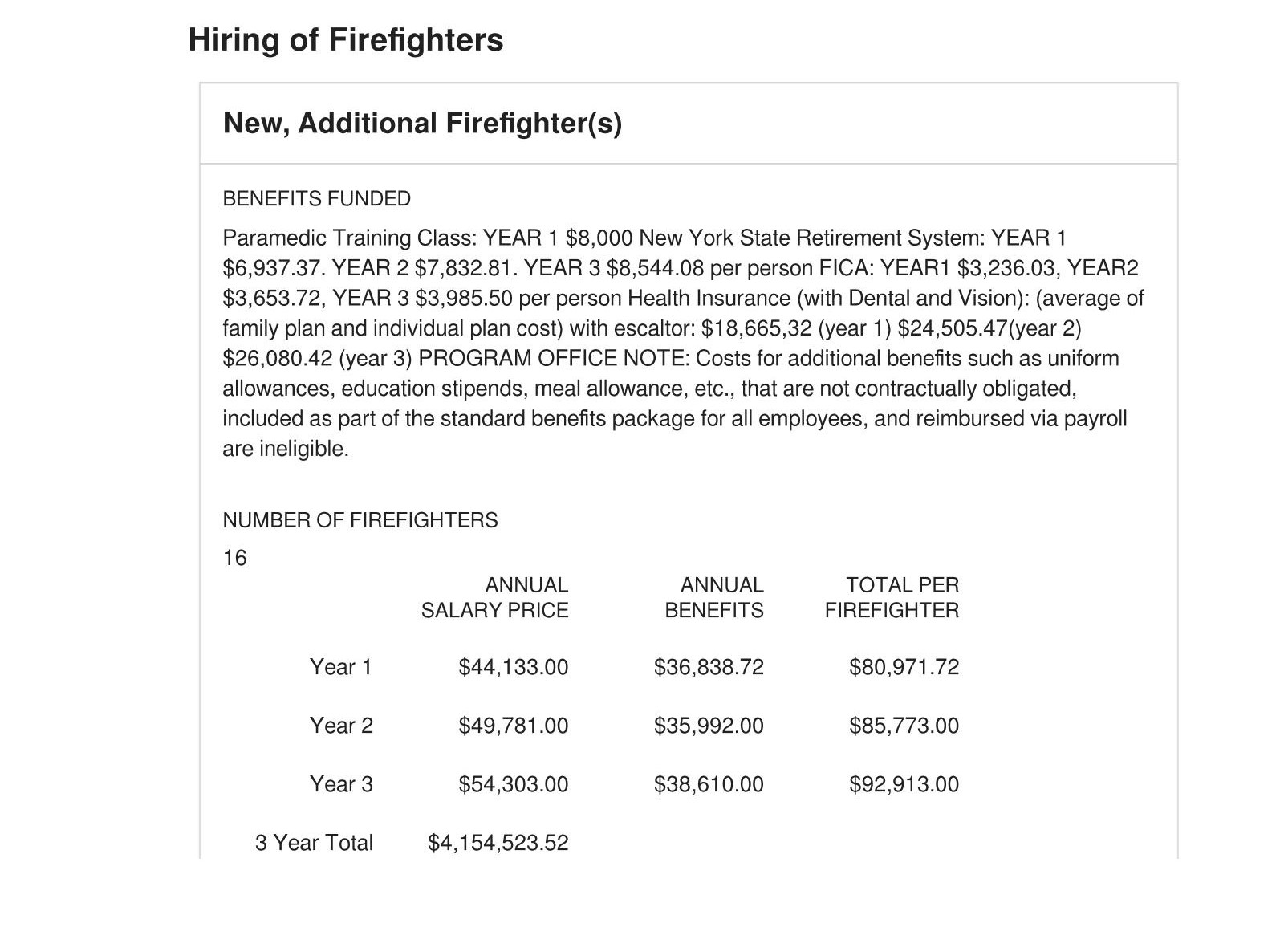 I am unclear how the grant determined the indicated increased costs for these positions each year, but in the fourth year, the city will be required to pay north of $1,500,000.00 out of its own budget to sustain these positions and, in the following year, more.

These are stunning numbers. Remember, this number only indicates the costs that will have to be added to the budget for the salaries and benefits for the 16 new firefighters. This number does not include the continued associated costs for equipment, uniforms, and training.

How Can This Work?

My experience with the Saratoga Springs Fire Department has been outstanding. We have great men and women working for us who deserve our support. I would like this all to be possible.

I simply do not see, however, how we will be able to maintain all these positions when the grant runs out without draining the resources we will need to provide raises for the existing city employees, maintain the basic services for the city, and protect our A+ bond rating.

To put this in perspective, let’s consider if the city on its own decided to include the salaries and benefits for these 16 positions in the 2023 budget. The city would need to find an additional $1,295,547.52 this year. I would like Commissioner Sanghvi or Commissioner Montagnino to explain how they would find this money. If they can’t, then how would they pay for these positions in three years when the grant runs out?

Positioning our small city budget to handle the additional $4.15M plus (wages, benefits, and the costs of funding 16 firefighters will increase each year) following the completion of the grant might require no additional new hires for any other department for the foreseeable future. This will leave city taxpayers on the hook for increased costs associated with the hole left in the budget when the SAFER Grant ends…. If there is future planning for this requirement, it has yet to be revealed to the public.

I find it extremely concerning that there has been no discussion regarding how the city will pay for the positions once the grant runs out.

I am willing to have my concerns proved to be baseless. I wrote to Finance Commissioner Minita Sanghvi over a week ago asking how the 2026 budget could absorb these costs. Commissioner Sanghvi has not responded to my inquiry.

Commissioner Montagnino apparently did not consider any of these long-term issues when he sent in the application for the FEMA grant, nor did he bother to consider any of the more fiscally responsible plans Michele Madigan had developed to address the need to staff the new fire station. (see Madigan’s remarks below)

Commissioner Montagnino enjoyed extremely favorable coverage from both print and television media in announcing the grant.

Montagnino responded in the September 22, 2022, Daily Gazette as to how he planned to pay for the position once the grant ran out by lashing out at the previous Council with false allegations.

“Our entire City Council is new — this is our first year in office,” he said. “We inherited a setup where there is no plan for the future. In fact the budget for this year — the 2022 budget — was based on projections that were inaccurate and exaggerated. So, we’re in the process of preparing next year’s budget and are really having to sharpen our pencils to come up with next year’s budget. We’re hoping to have something like a three-year plan worked out in the course of the next year, so we’re not running from one year to the next scrambling for funds.”

I don’t know when Commissioner Montagnino will stop blaming the current Council’s problems on the previous administration.

This attack seems particularly hollow. Finance Commissioner Michele Madigan’s ten-year record is exemplary. During her tenure, the city controlled taxes while maintaining city services. She earned the city an A+ bond rating. She was praised by the New York State Comptroller for her management of the city’s finances. She did all this while the city struggled with a devastating fire in city hall and a fiscal crisis precipitated by COVID.

Commissioner Sanghvi has repeatedly credited Ms. Madigan with the strong financial health of the city.

Montagnino’s gratuitous attack that the previous city council did not plan for the future when it adopted the budget for this year is false. It is regrettable that the Daily Gazette did not press Montagnino for the basis of his attack or contact Michele Madigan for a response.

The FEMA grant is not Commissioner Montagnino’s first fiscally irresponsible act. Readers may recall that in his campaign to reduce the current twelve-hour shifts of the police, he negotiated a memorandum of understanding (MOU) with the Saratoga Springs Police Benevolent Association. To get the shift hours reduced, he basically approved a wish list from the PBA. In an earlier post, I explored this agreement. Commissioner Montagnino seems uninterested in the fiscal limits of our city government.

This time Commissioner Sanghvi pushed back, and since June, the proposed MOU seems to have disappeared.

[JK: The following is a statement from former Finance Commissioner Michele Madigan regarding the potential long-term impact of the FEMA grant on the city’s finances]

This city has been blessed to have dedicated and knowledgeable staff that I relied upon in doing budgets. Lynn Bachner, the city’s budget director, was especially key, but it required the assistance of the management staff in all the departments. Together we ensured our city’s operations, maintained stable tax rates, and left the city in excellent financial condition after an unpredicted and unpredictable pandemic.  Most importantly, essential city services such as police and fire were intact, well-funded, and serving the public throughout the entire economic crisis.

Concern should be reserved for the next city budget that this Council will seek to approve for the taxpayers of Saratoga Springs, as well as the budgets and the state of city finances that will be left beyond its term.

A $4.15M grant is inarguably good news; at issue are the stipulations that come with the grant. This grant, which covers certain costs for 16 new firefighters, comes with the promise that all of these newly hired firefighters must remain for a designated time on the city payroll [JK: two years] following the completion of the grant. If there is future planning for this requirement, it has yet to be revealed to the public.  This is “no plan for the future.”

2022 new hires have been extensive; 2023 requested budget new hires, replacements, and upgrades were at an all-time high.  Moreover, obligations and processes long since established have been overlooked or ignored.

In the face of the long-awaited third Fire/EMS station, prior administrations presented carefully designed plans to successfully address how and when to staff the fire department within the reality of city finances.  I personally worked with prior Fire Chief Robert Williams and the current Fire Chief Joe Dolan, as well as prior Commissioners Mathiesen, Martin, and Dalton, Deputy Commissioners Finneran, Daley, Sharp, and Bachner. The 2022 Budget included funding for 4 new firefighters, and many prior budgets under my administrations included additional firefighters and police.  We took public safety and fiscal responsibility seriously.

It follows that, while I understand that the Local Fire Fighters Union has embraced the concept that safety demands 4 firefighters working on each engine for every shift, this may have to be introduced with restraint and discipline in order to be sustainable.

Positioning our small city budget to handle the additional $4.15M plus (wages, benefits, and the costs of funding 16 firefighters will increase each year) following the completion of the grant might require no additional new hires for any other department for the foreseeable future. This will leave city taxpayers on the hook for increased costs associated with the hole left in the budget when the SAFER Grant ends, a concern that Commissioner Sanghvi has raised many times regarding the American Rescue Act (“ARA”) funds that the city received, accepted, and was at much greater liberty to use largely without subsequent stipulations.

As a former Commissioner who understands the challenges of city finances and as a taxpayer with a vested interest in city budgets/tax rates, I wish the current city council much luck in providing the city with a 2023 budget that it can sustain within its financial means.

What Is in the City’s Future?

On Thursday night,10/6/22, the City Council will vote on whether to accept the FEMA grant.

I do not know what the penalties might be if the city were to fail to continue funding the sixteen firefighters following the end of the grant, but I understand they would be extremely harsh. I do not know if it is too late to modify the grant.

Most troubling is Commissioner Sanghvi’s silence on the potential impact of the grant on the future of the city’s finances. As Commissioner of Finance, Sanghvi is supposed to be the fiscal watchdog for our city.

If Michele Madigan’s fears are realized, this city would be facing severe strains on its finances. I find it more than frustrating that none of this is being discussed at the Council table.

Read 1075 times
More in this category: « Commissioner Moran Doubles Down Effort on Behalf of Problematic Proposal by Liberty Affordable Inc. For Affordable Housing Mayor Kim Takes a Victory Lap for Winning a Pointless Lawsuit »
back to top