Not All Triple Crown Seasons are Created Equal... 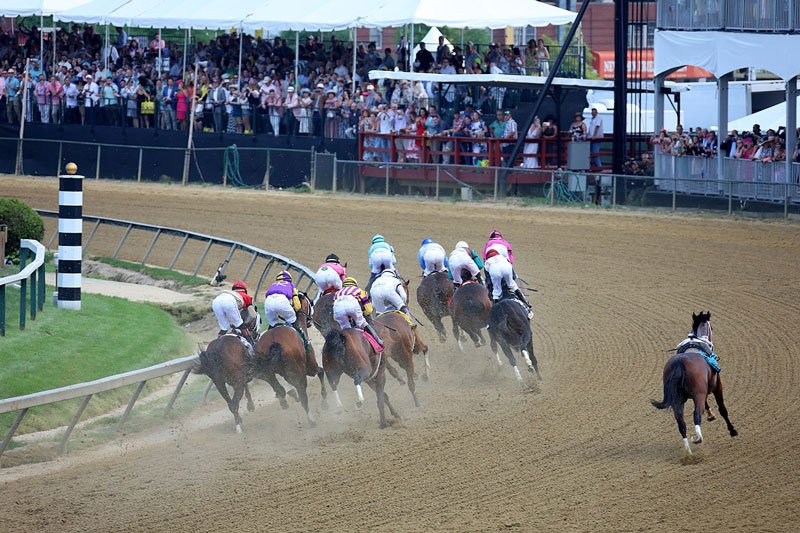 2019 Preakness Stakes: Bodexpress, riderless, on the outside. Race victor was War of Will. Photo provided by Maryland GovPics.

Not all Triple Crown seasons are created equal. Some drag. Most drag. Some are thrilling. See 2015. Some should feel thrilling, like 2018, but it didn’t. 2018 felt like somebody read “The 4-Hour Work Week” and life-hacked a Triple Crown.

Some Triple Crowns are exciting even when there’s a different winner in every race. 2007 ranks as one of the best of the early 21st century. Street Sense. Curlin. Rags to Riches. Curlin ran in all three legs, as did Hard Spun.

Years that should have been a blast, see 2008 and 2012 were tempered by IEAH/Richard Dutrow and Doug O’Neill/Paul Reddam. These couplings are, at times, unsavory. Such is horse racing.

Strangely, the Triple Crown this year isn’t thrilling, but it might be the most compelling renewal in over a decade. At least it’s weird. It’s definitely weird. That makes it better than most and it subverts the perennial concerns among almost all the horse racing punditry: this crop of three year-olds isn’t the good.

This happens every year, right?

To recap: The Kentucky Derby saw Maximum Security, the best horse, the horse who finished first, the horse who was nearly an accessory to murder, disqualified and placed next to last. It gave Country House, the colt with the worst name in the history of Derby winners, the garland of roses and Hall of Fame trainer Bill Mott his first Derby win.

The Preakness saw War of Will, a horse whose very life was threatened by Maximum Security in the Derby, go on to win the Preakness.

At the start of the Preakness, Bodexpress threw his rider, John Velazquez, and proceeded to terrify people in the know and amuse all others as he ran the entirety of the Preakness relieved of 126 pounds.

There have been hilarious t-shirts made. I will buy one. Bodexpress broke his maiden by winning over my heart.

I was on the phone talking to race caller Larry Collmus for unrelated story and I mused that what could we possibly expect in the Belmont Stakes, a quadruple dead-heat? I mean, really, what will happen? The race is already freaky based on the distance, 12 nasty furlongs, and the sheer size of the track.

With only nine horses entered (L) Tacitus, the third place finisher in the Derby, is the horse to beat. He comes in off five weeks rest. War of Will has run in every leg. Tacitus breezed a swift five furlongs in 1:00.42 over the main track.

Mott told the Blood-Horse, “He was moving very good, very level, and very even. He went along in :12s every furlong and went out strong enough. It was very similar to last week. Once he gets in his rhythm, he moves very nicely.”

That’s as nice as it comes. When a horse can find a nice rhythm over the giant plot of earth that is Belmont Park, that bodes well for making the best go of 1 ½ miles.

That makes him a terrifying horse and the one worth finding a way to beat on your tickets. I’m as thrilled as anyone to see how he performs.

But to circle back to the point of the Triple Crown as a whole, the key to maximum satisfaction lies not in the summation of the three chapters, but in the isolated movie event of each race.

It was said that when Christopher Nolan wrote and shot Batman Begins, he had the intention of making one movie. Then, if lucky enough, he’d make a second. Then a third.

This line of thinking resonates with me. I think we tend to see the Triple Crown season as a failure and a missed opportunity if there’s no Triple Crown on the line. Fist bumps to trainer Mark Casse for saddling up War of Will in all three legs to give some semblance of continuity.

Each race is a Polaroid picture. A snapshot in time. It is a collective bummer when the Derby winner doesn’t run in the Preakness, but was the Preakness any less or more exciting without —ick— Country House? Sorry, I’d rather drink battery acid than say this horse’s name.

And so it is with the Belmont Stakes. We’ve got a few Derby runners. We’ve got two real classy colts meeting for the first time since early May. The class photo for the Belmont field might not stink of Hall of Famers, but we sure as hell will be in for a show, a world-class call from Collmus, and maybe, just maybe, a four-way dead heat.

Don’t rule it out.

More in this category: « The 144th Preakness Stakes Don’t Sleep on the Toddster »
back to top