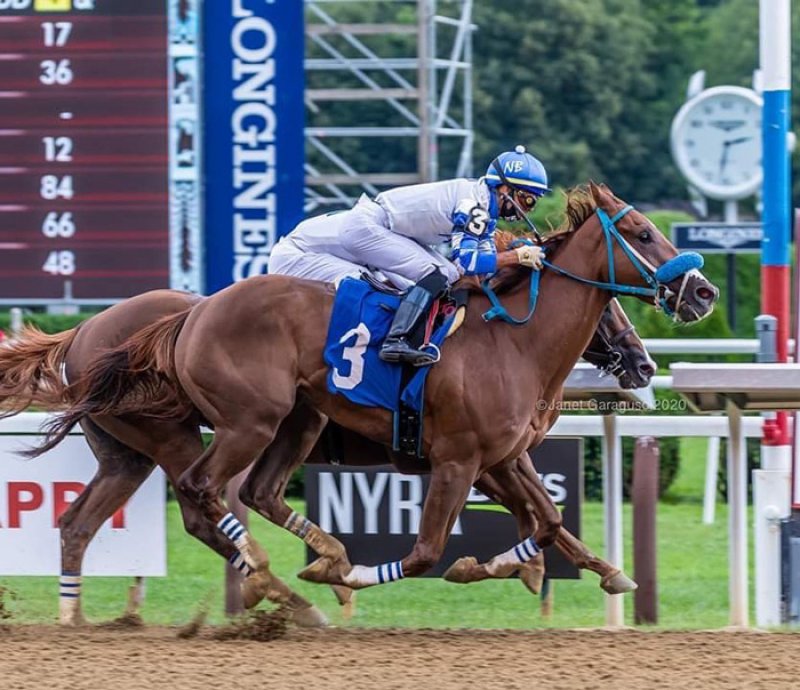 Since Opening Day of the Saratoga Race Course meet, there has been occasional solo cheer that echoes from the cavernous porch area of the clubhouse area near the finish line every time particular horses cross the wire, especially when they win.

That voice comes from Orlando Noda and he has every reason to celebrate. One of the principal owners of Noda Brothers LLC and trainer is having another solid start after 14 days of the meet. The 31-year-old Miami native has already won four races from 13 starts, including three wins as an owner, in his second year at Saratoga.

“That was the plan. I would like to accomplish six wins this meet,” Noda said. “We wanted to put them where they could win. As long as they are feeling good and eating good, I am going to run my horses and they can run. The competition is tough, but you have to place them aggressively. The thrill of this Saratoga meet is what racing is all about. Not many people can say this in a short period of time.”

With support from his brother Jonathan who is a finance director for a car dealership in Fort Lauderdale, Fl., Noda slowly developed a stable that led to his first runner – a homebred filly of G.T. Sonia – in late December 2018.

As G.T. Sonia was trying to graduate from the maiden ranks, Noda got several horses from the claiming box. Eventually, one of those claiming horses helped Noda become successful: T Loves a Fight.

Claimed for $10,000 in May 2019, the once stakes-winning gelding gave not only Noda his first career win as an owner and trainer, he also gave him his first Saratoga victory during the meet’s opening weekend last year. Then nearly two weeks later, G.T. Sonia also picked up her first win as Noda finished the meet with three wins, a second-place finish, and a pair of third-place runners from just nine starters.

Even before this year’s Saratoga meet, Noda continued to win races with seven different horses at Aqueduct and Belmont during the winter and spring and around the COVID-19 pandemic. At the same time, he has been winning races that go beyond his ownership that includes Zilla Racing Stables based in Guilderland and Mad Dog Racing Stables.

“T Loves a Fight put me on the map,” Noda said. “We’re growing. Slowly and surely, I think people are noticing us. People are sending me horses. Everyone thinks that we can claim a horse for $10,000 and become ‘T’, but it’s not that easy.”

While T Love a Fight may have started Noda’s success, it was G.T. Sonia who helped start the stable. In 2012 while learning how to gallop a horse at Westampton Farm in New Jersey, Noda, his brother and his father Jose Noda Fernandez, who later claimed Very Very Stella for $12,500 and finished third in the Grade 3 Smile Stakes at 134-1, brought 10 horses to compete primarily at Parx and Charles Town.

The family managed two wins at Charles Town, then they brought the horses to compete in Florida before dispersing all the horses except one: Bfit. After Bfit led from start to finish in a $6,250 claiming race at Calder, she retired in December 2013 to become a broodmare.

With the help of Pick View LLC in Ocala, Fla., the Noda family bred Bfit to graded stakes winner Brethren and produced G.T. Sonia, who raced 13 times with two wins before being retired late last year. Today, G.T. Sonia is in foal to graded stakes winner Flameaway, a horse who Noda had groomed while working for Mark Casse. Noda is expecting the foal filly to be born in March 2021.

“G.T. Sonia had some injuries,” Noda said. “Instead of pressing her, I wanted her to be a mom and be happy in the field. I am going to send that foal to Ocala to be broken, then have her come back here to race. I would like her to break maiden here in Saratoga, just like her mama.”

Noda is now looking to make an impact at the next level by entering recent maiden winner First Line for Saturday’s 151st running of the Grade 1, $1 million Runhappy Travers Stakes where he is expected to compete against Sackatoga Stable’s Belmont winner Tiz the Law.

Competing at 1 1/8 miles for the first time, First Line pressed the pace, then engaged in a pace battle through the stretch to win his first start by a neck in a finishing time that is comparable to other candidates in the Travers field.

“He came out of that race in good shape,” Noda said. “He fought a mile and an eighth through the wire.

I cannot ask for anything more. Overall, our luck is running good and we are going with the flow. I think we are a go. We’re in it.”

Even before his 3-year-old gelding won his first start, Noda had a lot of promise in his horse, who was purchased privately last October. After a disappointing debut in January, First Line showed some improvement through a pair of sprint races. Now that First Line has won his first race, Noda is hoping the horse can continue moving forward for the Travers.

“I think he should have won his first race, but he got dirt kicked in his face and raced green,” Noda said. He has matured through each race. It’s not always you get a horse like this. I think things are playing out well. Win, lose or draw. I know people are rooting for me. We might be the longest shot on the board, but we might outrun them all.”

More in this category: « A Lookback at Whitney Day NYRA Completes Saratoga Meet; All-Sources Handle Tops $702 Million »
back to top