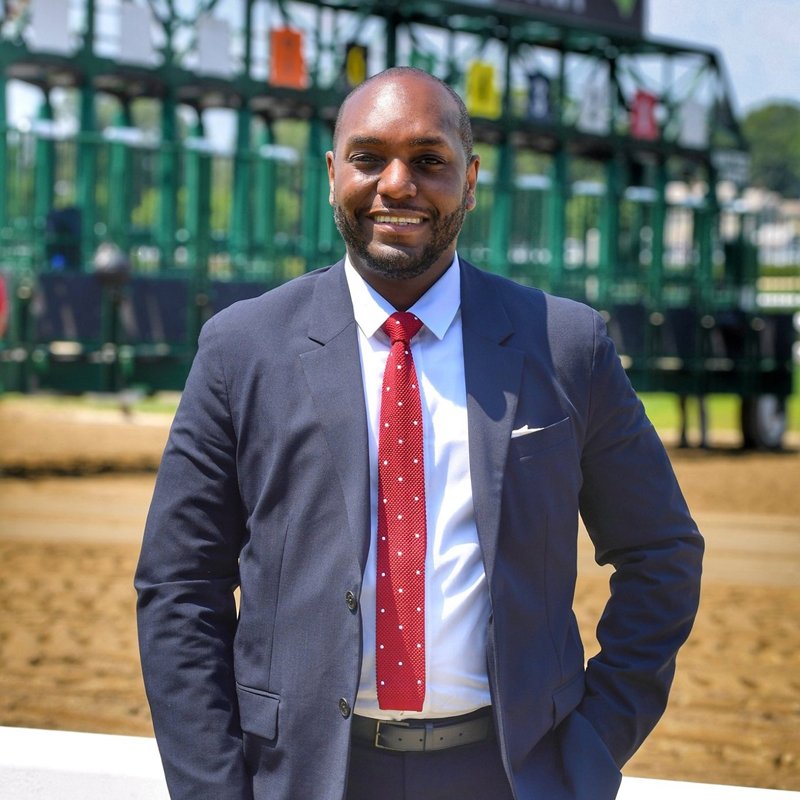 After nearly a decade of working for NYRA, Thompson continues to take the role of Executive Director for the New York Thoroughbred Breeders

Najja Thompson has been a horse racing fan since he was a child, but he never knew that he would make a career in the sport. Now, Thompson has evolved into the leaders in New York Thoroughbred racing, especially here in Saratoga Springs.

Thompson became the Executive Director of the New York Thoroughbred Breeders in December. After working for the New York Racing Association in the Communications Department and Human Resources since 2011, Thompson pursued the opportunity after Jeffrey Cannizzo became Senior Director of Government Affairs for NYRA.

Thompson has taken the reigns of the NYTB that promotes and advances the state’s Thoroughbred breeding and racing industry through its incentives, rewards and other programs.

He also leads a program that has grown over the past decade under Cannizzo and the Board of Directors’ guidance as horses like two-time international Grade 1 winner Mind Your Biscuits, 2018 Whitney winner Diversify, and last year’s Belmont and Travers winner Tiz the Law reflect the program’s success.

“This was a great opportunity,” Thompson said. “Jeffrey Cannizzo and the Board really ushered a great heyday for the New York-bred program with Mind Your Biscuits and Diversify. The program really took a step above to become the best state and regional program.”

Before developing a career in horse racing, Westbury, NY-native grew up being a fan of the sport with his family, including his uncle, Larry Stewart, who is a breeder in Williston, Fla. and helped produce multiple graded stakes winner Get Funky.

“He used to take me to the track, and we initially went to Belmont, Aqueduct, and OTB,” the 36-year-old Thompson said. “When we moved to Florida, we went to Gulfstream Park and Gulfstream Park West.”

Through his teenage years, Thompson continued buying and studying the Daily Racing Form while following the New York and Florida circuit. Eventually, those study habits were redirected to history and philosophy at Florida State.

Thompson considered law school after graduating from Florida State. However, he opted working for Verizon Marketing in South Florida as a way to make and save money, but he didn’t find the job as satisfying and was looking for a career change.

“I thought about the student loan debt,” he said. “That was the deterrent for me as to work for a couple of years. I really wasn’t enjoying it. I had thought about what I could do.”

Since Thompson still enjoyed going to the track, Stewart suggested a career in horse racing. Taking that suggestion, Thompson applied to positions at NYRA.

“Obviously, I didn’t have the experience to become a trainer. I was definitely interested in the business end,” Thompson said. “I sent out some letters and Julie Levine, recruiter for NYRA, contacted me for an interview. Pretty much from there, everything took off.”

For nine years, Thompson worked in the Communications Department by writing stories, notes, and recaps before becoming a Recruitment and Employee Engagement Specialist. Also over the last couple of years, he has served as Vice President for the Turf Publicists of America.

One of Thompson’s memorable experiences during his time with NYRA was seeing the turnout for recent Hall of Fame inductee and Triple Crown winner American Pharoah’s gallop over the Saratoga track just a couple of days before the Travers in 2015.

“That is one moment that I will never forget,” he said. “It was a gallop one-time around the track and 20,000 people came for the workout. That shows the love from Saratoga and the surrounding communities just have for racing in which American Pharoah can draw 20,000 people.”

As executive director, Thompson is still connected to NYRA as a member of the Board of Directors. Beyond that, he also enjoys working with breeders and farm owners that include Old Tavern Farm, Song Hill Farm and McMahon of Saratoga Thoroughbreds, as well as legislators and other facets of the horse racing industry, to promote the program.

“I like the challenge to promote and grow the program not only at the New York-bred sales, but also attracting farm owners and working with the legislature to show the agricultural impact that farm owners and breeders make to the state with jobs and land preservation,” he said.

Along with the agricultural impact, Thoroughbred racing in New York is responsible for 19,000 jobs and more than $3 billion in annual economic impact, which includes 2,600 jobs and $250 million in the Saratoga Springs region.

“People may show up to the races on a Saturday,” he said. “But behind that, it’s the person who ships the horse from the farm, it’s the farrier who shoes the horse, and it’s the feed company that sends the feed. Those are the jobs created from the racing industry and done right here in Saratoga and throughout the state.”

One of Thompson’s highlighted events in his position is the Fasig-Tipton New York-bred yearling sales scheduled for Aug. 15-16. After last year’s sales were canceled due to the COVID-19 pandemic, Thompson believes there is a lot to look forward to this year’s sales.

“There is a lot of excitement and buzz going into the sale,” he said. “That will be the highlight of the program and it will display the best-of-the-best of yearlings. From what I have heard from bloodstock agents, it is the strongest book of the sale that they have seen.”

Within a decade, Thompson has watched his career evolve in a similar way that the New York-bred program has developed successfully. Though, he knows there are variables that made it happen.

“I have been blessed. Of course, there is hard work and a little bit of luck,” he said. “Things have fell into the right place for me to have that opportunity to help lead the New York Thoroughbred Breeders and help contribute to the New York-bred program. I have definitely worked hard to get to this moment, and I will continue to work hard and do my best to make sure the New York-bred program remains the best in the country.”

More in this category: « Making a Full Circle of a Horse Racing Career The Whitneys of Saratoga: Part 1 of a 2 Part Series »
back to top