It’s a Summer in Saratoga for Sharp... in More Ways than One 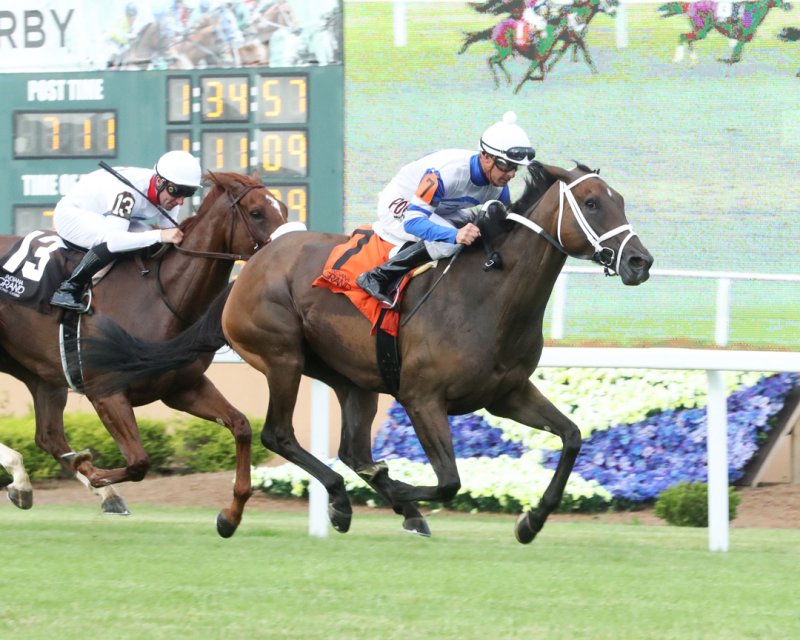 Summer in Saratoga. Photo by COADY.

Just like his mare named Summer in Saratoga who has made improvement, Sharp and his horses continue to have a solid Saratoga meet.

It has become a common saying that Saratoga Race Course is the summer place to be.

It is also a coincidence that there are two mares with the same name that somewhat reflects the adage: Summer in Saratoga.

The first mare, a New York-bred born in 2002, had just one win in 24 races, including three starts at Saratoga, before retiring and becoming a broodmare at McMahon of Saratoga Thoroughbreds and Ted Taylor Thoroughbreds.

The other mare, born in Kentucky five years ago from the sire-dam combination of Grade 1 winners Hard Spun and Love Theway Youare, has been more successful for trainer Joe Sharp and owner Larry Hirsch with his Highlander Training Center in Texas.

Since being purchased for $165,000 at the 2019 Fasig-Tipton July Selected Horses of Racing Age sale, this particular Summer in Saratoga has won five races, including two stakes races on the turf this year, and has earned $332,072 in 14 career starts.

It also seems appropriately fitting that Summer in Saratoga had been nominated for the Grade 2 Ballston Spa Stakes as part of the Saturday’s Travers Day undercard. Though, Sharp said he is uncertain if she will make her first appearance at Saratoga.

“I’ve always wanted to bring her up here,” Sharp said. “I thought it would be nice. This year, the way the timing worked out, she got off-track a little bit.”

Summer in Saratoga finished fourth and third in her first two starts for then-trainer Chad Brown and then-owner William Lawrence. About two months after the sale, she made significant improvement that led to her first career win in October 2019, and that became a pathway to other victories with the Tom Benson Memorial Stakes and Indiana General Assembly Distaff Stakes this year.

“I just think she was immature,” Sharp said. “Some horses are precocious when they are young. She’s a big filly with a big frame and she needed time to develop into herself. She was in great condition when we got her from Chad. I just think she was kind of a late bloomer.”

“She has some upside with her in her pedigree,” he added. “So, we bought her with a long-term plan of getting her some black type. Obviously, everything has fallen into place well with her.”

Paralleling to the mare’s success, Sharp’s season at Saratoga has also fallen into place. At the end of the sixth week of the meet, Sharp was within contention of being one of the top 10 trainers with six winners from 23 starters, which is close to his season-best of eight winners from 29 starters in 2018, and he has been training on his own for just seven years after being an assistant to Michael Stidham and Michael Maker.

This season is also a contrast from last year when Sharp was forced to stay home in Kentucky due to surgery to remove a benign brain tumor and the COVID-19 pandemic. With just 13 starters, his team still came away with two winners.

Sharp, a former jockey, is also back to riding and working horses. On Saturday, he was aboard recent West Virginia Senate President's Cup Stakes winner Catch a Bid for a workout over the Oklahoma Training Track.

“Last year, we didn’t send as many horses up here due to COVID-19 and my surgeries because I wasn’t able to come up here at all,” he said. “This year, we rented a place and hit it full stride. Personally and physically, I have come a long way. I’ve been feeling good. I’ve been able to get back on horses. Last year at this time, I was sitting in a recliner with staples in my head. It’s amazing what a year can do.”

Absolute Love, a 6-year-old mare that Sharp claimed for $8,000 earlier this year at Churchill Downs, was his first starter as she got there in the final strides to win $12,500. As she approached the Winner’s Circle, he learned that she was claimed by Rob Atras for $12,500. Waiting nearly a month for her return, Sharp got Absolute Love back for $16,000 as 13 other trainers put in a claim for her.

Coming off a nine-month layoff, Runnin’ Ray is 2-for-2 this year with an 11-length win in a $20,000 claiming race at Churchill Downs followed by a victory in a starter allowance race at Saratoga on July 30.

Rebounding from a struggling finish over a yielding Belmont turf course in the Grade 1 Jaipur, Fast Boat just up in the final strides for his second graded stakes win in the Grade 3 Troy. The 6-year-old gelding who claimed for $40,000 three years ago has won nine races while earning more than $400,000.

Meanwhile, Lady Danae, Flint Ridge and Lookin to Fly each graduated from the maiden ranks.

With just under two weeks remaining in the Saratoga season, Sharp has sent most of his prior winners back to Kentucky, with the exception of Runnin’ Ray who may make another start in an allowance race near the end of the meet.

He hopes that his remaining horses, which includes unraced Sacred Samurai possibly being pointed for a maiden race on the Travers Day undercard, can help his stable finish strong.

“Timing-wise off those kind of races, you cannot bring them back within 2-3 weeks,” he said. “We still have a couple of horses to run. So, we are hoping to close it out strong.”

Read 436 times
More in this category: « The Spa Sees A New Stakes Schedule Saratoga Wrap Up: Good Performances and Smiles All Around »
back to top