A Career that Reflects Award-Winning Writing, Legends, Humor, and Respect 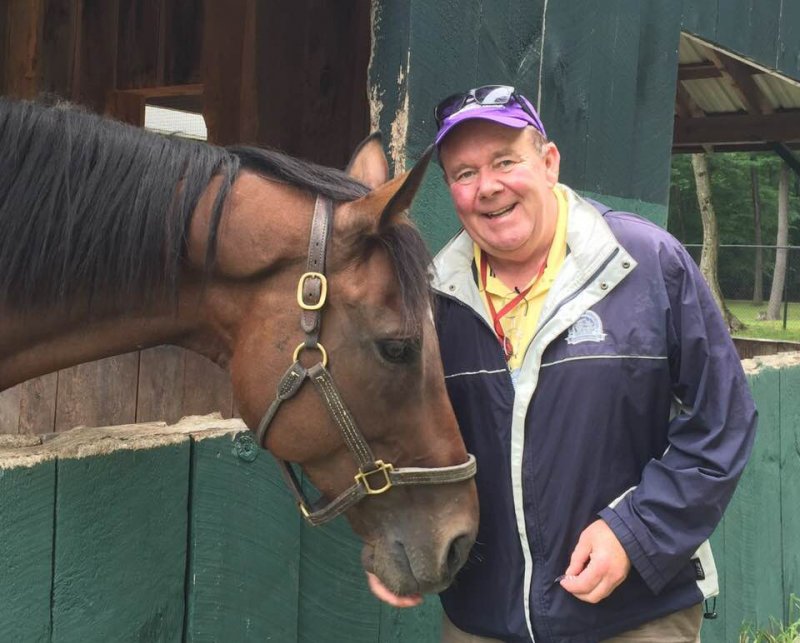 Four years later after “retiring,” Tim Wilkin continues to cover the sport that he loves

When people retire from their careers, especially ones that cover more than four decades, they enjoy the rest of their lives doing something else.

That’s not the case for Tim Wilkin.

Forty years later, Wilkin continues to drive his golf cart around Saratoga Race Course every morning looking for notes and stories, as well as taking pictures and video for social media, for The Times Union.

He doesn’t do it for the money. He does it for the love of the sport.

“As soon as I got here, I fell in love with it. It’s hard not to,” he said. “The morning is the best part of the day. There is no question in my mind.”

After 35 years of writing for the Times Union, Wilkin took a buyout offer in December 2020. While many people equate a buyout to retirement, Wilkin is not one of them.

“I wouldn’t call it retirement,” he said with a touch of humor.

Wilkin has always had a sense of humor by sharing entertaining stories or engaging in light banter, even during the long days at Saratoga as it was the case two weeks ago when he came to the track at 5:30 a.m. to watch a workout from recent Travers winner Essential Quality. From there, he stayed on the grounds for the rest of the day to cover the Alabama Stakes, handicap Sunday’s races, and work on a feature story.

“I have never grown up, but I think that’s important,” the 65-year-old Wilkin said. “You cannot take yourself too seriously in life. You’re not here long enough to get bent out shape. Have fun. Live your life. Do your work. What else is there? Right?”

Wilkin never thought his career path went the direction of covering Saratoga, the Triple Crown and the Breeders’ Cup. He has covered every Saratoga racing season and the Travers with one exception – the 1997 Travers. He missed that edition because of a wedding in Canandaigua.

“I said to somebody, ‘If you invite me to your wedding, I will get you a glass duck,’” the Rochester native said. “They invited me to their wedding. I missed the Travers. They got a glass duck.”

Still, for his dedication and diligent work, Wilkin has received several honors with the most-recent being the 2019 Walter Haight Award for Career Excellence in Turf Writing from the National Turf Writers and Broadcasters.

“I never thought my path would take me here, but it did and here I am,” he said.

Wilkin’s path to covering horse racing started in 1979 when he graduated from St. Bonaventure. His brother Jeff, who was working for the Post Star at the time, gave him a contact at The Saratogian for a position in the sports department.

After spending his first season of putting together the Pink Sheet, Wilkin started covering Saratoga on the backstretch and the press box. Just like with many new reporters, Wilkin got caught up in the awe of several established and award-winning turf writers, including the legendary Red Smith.

Wilkin continued, “All of the sudden, he said to me, ‘Excuse me. Can you do me a favor?’ I said, “Yes, Mr. Smith. Sure, anything.’ He said, ‘Can you go down there and get me a piece of pie?’ My big conversation with Red Smith centered around me going to the lunch area to get him a piece of cherry pie.”

At the same time, Wilkin found some of the legends in the press box to be helpful. This is included the great Joe Hirsch, who later invited Wilkin to the Wishing Well for dinner every racing season.

“Joe Hirsch was a saint to young reporters who were trying to find a way into this game,” Wilkin said. “He went out of his way to help you. Whenever I had a question, no matter how stupid it might be, he would look up stuff in books. He provided so much guidance.”

Wilkin left The Saratogian for the Times Union in 1985. Along with covering the Albany Patroons, RPI hockey, a few of Mike Tyson’s early fights and other assignments, he joined a solid group of horse racing writers that included two-time Red Smith Award winner Matt Graves and Tim Layden, who also became an award-winning sports writer through his work at Sports Illustrated.

“I was right behind Matt on the coverage. I was his henchman,” Wilkin said. “I did most of the barn stuff and he did the races in the afternoon.”

Along with providing horse racing coverage for more than 20 years, Wilkin and Graves also developed a special friendship, often filled with humorous stories and one-liners, that went beyond the Saratoga press box.

“We had a lot of fun up there,” Wilkin said. “We got our work done, but the press box was also a fun place. Matt tried to be semi-serious, but he was one of the funniest people who I ever met in my life. He was so quick with a quip.”

After Graves’s retirement in 2007, Wilkin found another person to fill that humor: Mike Jarboe, who was a Times Union copy editor with an interest in horse racing and his fiddle. For Wilkin and some readers, Jarboe could have been considered a fictional character.

“Jarboe was like the village idiot, but I say that in a loving way because he loved Saratoga and being up here,” Wilkin said. “He envisioned being a celebrity and people noticing him. I remember one time going through the clubhouse and someone came up to me and asked if Jarboe really existed. They thought he was a cartoon character.”

Their humorous presence in the press box quickly faded within a four-month period as Jarboe passed away on Sept. 19, 2017, followed by Graves on Jan. 27, 2018.

Then, another year later, Wilkin also lost another special person who was part of his career: Marylou Whitney, who enjoyed being the Times Union guest handicapper on Whitney Day and winning “a bunch of them” against Wilkin.

Over a four-decade career, there is one thing that Wilkin has never lost from those in the sport: respect. Owners such as Mike Repole and Jack Knowlton, Hall of Fame trainers like Nick Zito, Bill Mott and recent inductee Todd Pletcher, and other fellow writers have appreciated Wilkin’s work.

“I never thought I would be here this long. I started and ended my career at the Times Union,” Wilkin said. “When I get respect from people who cover this sport, that makes it really good. It is a really a good deal.”

Read 385 times
More in this category: « Saratoga Wrap Up: Good Performances and Smiles All Around
back to top