Gardening with Peter Bowden: The Urban Legend of the Poisonous Poinsettia 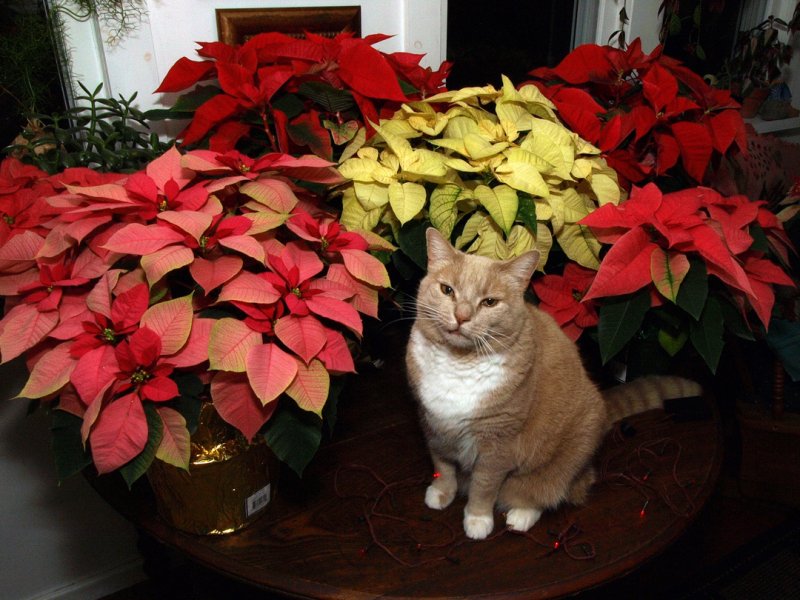 Every year I encounter someone visiting the garden center who will not consider purchasing a poinsettia because they believe that their cat or dog is going to eat it and die. This belief is so ingrained that there is no convincing them otherwise.

It is amazing and amusing what people choose to believe. A survey a couple of years ago revealed that about 70% of the population still believes that poinsettias are poisonous. I'm sure it doesn't help that the word poinsettia resembles the word poison. How did the poor poinsettia become the focus of all this angst?

It all started in Hawaii in 1919 when the 2-year-old toddler son of an army officer was found dead. Some reports indicate that the child was found near a poinsettia bush which is a common garden plant in Hawaii. It was supposed that the child had eaten some of the poinsettia and died. There was no proof of this...no autopsy or toxicology test...it was simply assumed that the poinsettia was to blame. The rumor spread throughout the islands, and it became common knowledge that "poinsettias are poisonous" and will kill if eaten.

Twenty-five years later the rumor was so well-entrenched that it was published as fact in a book called ‘Poisonous Plants of Hawaii.’ At that point there was no stopping the rumor and it went viral. Soon poinsettias were being incorrectly listed as poisonous plants by even such illustrious institutions as the USDA. All this without one shred of evidence of any person or animal ever being harmed let alone killed by eating poinsettias.

With proper care, poinsettias can be grown year after year and reach heights up to 3 feet even as a potted specimen. The colorful bracts are actually a special set of leaves that change color, simulating giant flowers to attract insects to the small yellow flowers at their center. During the blooming stage, poinsettias should be kept in a warm, sunny spot with the soil just lightly moist. The small yellow flowers at the center of the bract should be pinched off. Don’t feed the plant. Maintain the poinsettia this way until midsummer. At that time, cut it back by about 1/3, removing whatever colorful bracts that remain. Increase watering and feed every other week. If you move the plant outside for the summer, be sure to bring it back in when nighttime temperatures approach 50° F.

The trickiest part is getting the poinsettia's bracts to turn color at the right time. It needs to follow the natural cycle of shortening daylight as it occurs outdoors. This means that when the sun goes down, the poinsettia MUST be in a TOTALLY DARK AREA. This critical period starts about the first of October. Light from even one 40-watt bulb after dark is enough to prevent the poinsettia from changing color. Many people think it needs to go into a closet for the entire month of October. Not so. It still needs light in the daytime. The best thing to do is keep it in a room where there are no lights on in the evening or at night. Once you notice that the bracts have begun to change color, you can move the plant wherever you wish. Once the color starts to change nothing will stop it and the cycle begins again.

More in this category: « Holiday Happy Hour: Pairing the Perfect Wine, Cocktail, or Aperitif with Saratoga Wine & Spirits Gardening with Peter Bowden: “A Tree Ever Green” »
back to top