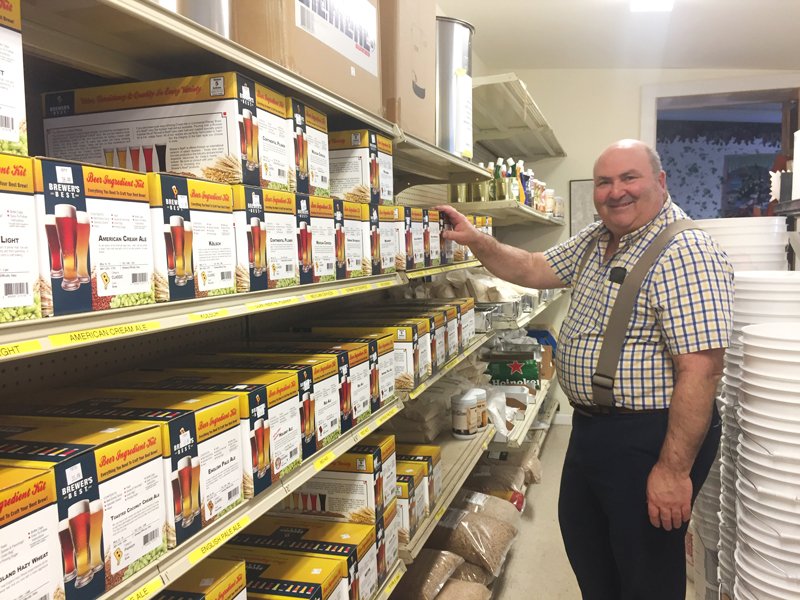 Antis stands with the variety of beer kits Saratoga Zymurgist has to offer. Photo by Opal Jessica Bogdan.

SARATOGA SPRINGS — Those looking to start their own in-home fermentation can look no further than Saratoga Zymurgist.

Saratoga Zymurgist offers a full service home-brewing and winemaking shop. Priding themselves on being experts in fermentation, customers can not only find the materials for fermenting, but will learn the science as well.

“We’re here to teach and educate for a hobby,” owner and zymurgist Reed Antis said.

A zymurgist is an individual who studies the science of fermentation. Antis said he started as a home brewer who became involved with the hobby over time. After serving for a few years as a certified beer judge in competitions, Antis took ownership of the store with his wife, Mary Antis.

Reed Antis said the store started in the early 90’s on Broadway, which later moved to Phila Street. The company was then sold to Eddy’s Beverage Inc. who in 2009 reached out to Antis to see if he wanted to take the business over. In 2010 Antis said he purchased the business and hasn’t worked a day since.

“I don’t consider this work,” Antis said. “Most of my time is educating. I’ve been nicknamed the professor because I’m constantly training someone to learn [fermentation].”

Antis encourages anyone looking to make beer at home, wine at home, or anything with fermentation at home to stop by the store. Offering wine kits and beer kits, the store also holds items to brew hard cider, mead, kombucha, cheese and vinegar. The store offers a wide variety of yeast to ferment with, which Antis said varies depending on what is being fermented.

“My job is to really find out what you need... what are you trying to ferment,” Antis said.

When a customer walks into the store, Antis said he asks what they are looking for. If they are looking to make grape wine, they have kits with all the ingredients to create a six-gallon batch of wine. He said hard cider is the most popular, followed by country wine, which is a wine made with any kind of fruit, besides grapes. Antis said fermenting honey, also known as mead, is also popular.

Self-taught, through books and seminars, the art of homebrewing, Antis ensures each customer feels confident with the art of fermenting each time they leave the store.

“When someone comes back and says ‘hey that worked’ then I’ve done my job communicating. I learned that I have to hone my skills as a communicator to each individual and how they can absorb information,” Antis said.

In addition, Antis said his favorite thing to say is “assume nothing.” Because zymurgy is the science of fermentation, testing should be a priority rather than assuming or guessing. Antis said the hardest part is getting people to know where they are. Located in the corner adjacent to EBI Beverages, Antis said most people miss the arrow and flag they hang out to let people know they are there.

“In the City of Saratoga we have easy parking, easy reach off major roads, and no complaints,” Antis said.

For more experienced home brewers, the store offers different grains and a mill to grind the grains with. Once stepping into the fermenting world, Antis said each recipe is what makes the process interesting and different.

“You can play with it, put your own twist to it,” Antis said.

Login to post comments
More in this category: « Drawing to Bring Attention to Hungry Kids Turning Water into Beer »
back to top