Working At Home In The Age of Corona 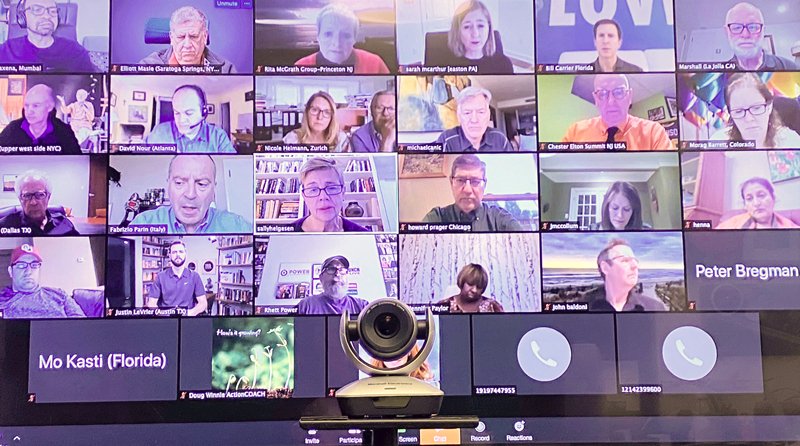 Photo by Elliott Masie, while talking simultaneously with some 60 or so different business leaders around the world about their companies and their employees and transitioning to working remotely during this pandemic.

SARATOGA SPRINGS – “Ultimately, I think we’re going to be talking about things as being either pre-Corona, or post-Corona,” says Elliott Masie, disengaging from a Zoom video conference with a screen depicting representatives from 60 different companies across the nation who had gathered to discuss where they are  and what they are doing “in these times.”

Masie has hosted and curated learning & development seminars, labs, and conferences for several decades. He’s pulled in experts from across the country and put up interviews with them since before the age of Podcasts and Ted Talks, in the formative years of the Internet. He leads a learning consortium of more than 150 global organizations cooperating on the evolution of learning strategies - a lot of it from the Saratoga Springs think tank The Masie Center, with a focus on how organizations can support learning and knowledge within the workforce.

On this day, the faces of dozens of representatives from a myriad of companies simultaneously stare back from his screen. One represents a financial service company with 60,000 employees, another a fast food service company that employs 1 million workers.

“Many of them are having to lay people off, and others are working from home, so I try to be the Rabbi – to mediate, and to have conversations with them about what’s changing,” Masie says. “We’ve never had a situation like this before.”

The moment it became clear the virus was coming to the U.S., Masie says he decided to use the Masie Center - its people, resources, reputation and networks - to host regular video support conversations to link colleagues and support the people who are in charge of the workforce learning all around the country.

“It’s hard. If you have your partner, or kids or dogs. Maybe you don’t have the Internet at home. People may not have all the tools they need to work at home. To employers, I would say: in the old days, meaning a few years ago, when businesses shut down, they just shut down and people went home. We’re now doing something that’s miraculous, but there’s no model for doing that,” Masie says.

”I was on the phone with someone who has 47,000 people working for them and the first thing they realized is that 9-to-5 isn’t a relative term. Meaning somebody may need to take care of their kids, because daycare’s not working. So, they’ve moved from thinking about the 9-to-5 to just get done what you can done.”

Communities in upstate New York began looking at things like high-speed Internet capabilities with an eye trained upon a future time when employees could be capable of working from their homes. In 2010, then-President Barack Obama signed legislation instructing each federal agency to come up with policies to promote telecommuting. At the time of the Telework Enhancement Act, approximately 5 percent of the federal work force was engaged in some level of teleworking, with slightly more than 100,000 employees teleworking at least once a week. A 2016 Gallup Survey reported the number of employees who worked remotely in some capacity was up to 43%. For those who haven’t, now would seem a good time to heed the advice from those who have.

“Have a dedicated in-home workspace and do your best to keep it holy,” explains Michael Eck, a longtime beloved Capital Region fixture in the art and music world. A self-employed freelancer for nearly 30 years, Eck telecommutes every day to the West Coast. Currently he works for Two Old Hippies Stringed Instruments in Bend, OR.

“Get up in the morning at the same time you would for your morning drive and do your morning routine,” Eck says. “Get dressed. In actual clothes. And put on your shoes. You’re going to work. Have breakfast. Be at the desk by your regular time and do the work. Make sure to eat lunch and take a brief afternoon walk so it feels like a regular day. Lather, rinse, repeat.”

Working from home with kids at home is an entirely new experience for those not accustomed to it, writes Kristen Hare, who has broken down her suggestions for working parents at home into categories respective of the children’s ages - from babies and toddlers to middle schoolers and teens. The piece may be viewed at Poynter.org.

“Just because workers’ laptops are now nearby on their kitchen tables doesn’t mean managers can expect their workforce to be available 24/7,” points out Alison Green in her article “You Don’t Have to Work All the Time Now,” which may be read at slate.com. “People feel like they’re expected to be working every minute of the day—in ways they generally wouldn’t be expected to do when they’re in the office... Remote workers aren’t on a chain gang; they’ve just temporarily relocated their workspace.”

For people new to working at home, Masie recommends being mindful of your time not only to produce good quality work, but to avoid burning out.

“We’re people under stress. And if people are under stress, their ability to learn, for accuracy, and their ability to 100% focus goes down. So, things that might have taken a half-hour at work, now might take two hours,” Masie says. “You do need to monitor your stress level. And you may need to tell people to stop working, meaning they’re working 14 hours a day just because there is no going home. That’s not the deal and that’s not healthy.”

He also recommends limiting your news-watching time. “I tell people to find one hour a day where if you want to, need to, or choose to, to go get the news. Don’t do that all day long. I love news, talking about it, thinking about it - but it’s not really updating, in a sense. You talk to someone who went through Katrina, they’re not floating through the river with a transistor radio on.  So, I think there’s a psychological balance that’s needed.”

At home, one may not have the informal “water cooler” moments to talk with co-workers.  Masie says in a social-distancing world, he’s created a time to socially interact with others, albeit it using technological means.

“Every morning at 7:15, Ira and I have a cup of coffee and a toasted bagel. He lives on one side of town and I live on the other,” Masie says, with a laugh. “And we carry on the same kind of conversations we’ve always had.

“Some things will never be the same and sadly a lot of people who have spent their life building a career, might have it disrupted, in some cases transformed, or in the worse-case ended by a tragic moment in history. So, you go back to Kubler-Ross there are some death and dying elements that people have to go through to find some peace. Luckily I can’t think of a better place that I would like to be than Saratoga.”

More in this category: « Two Ideas to Generate Cash Flow During COVID-19 Hannaford Dedicates Early Morning Shopping for Vulnerable Customers »
back to top