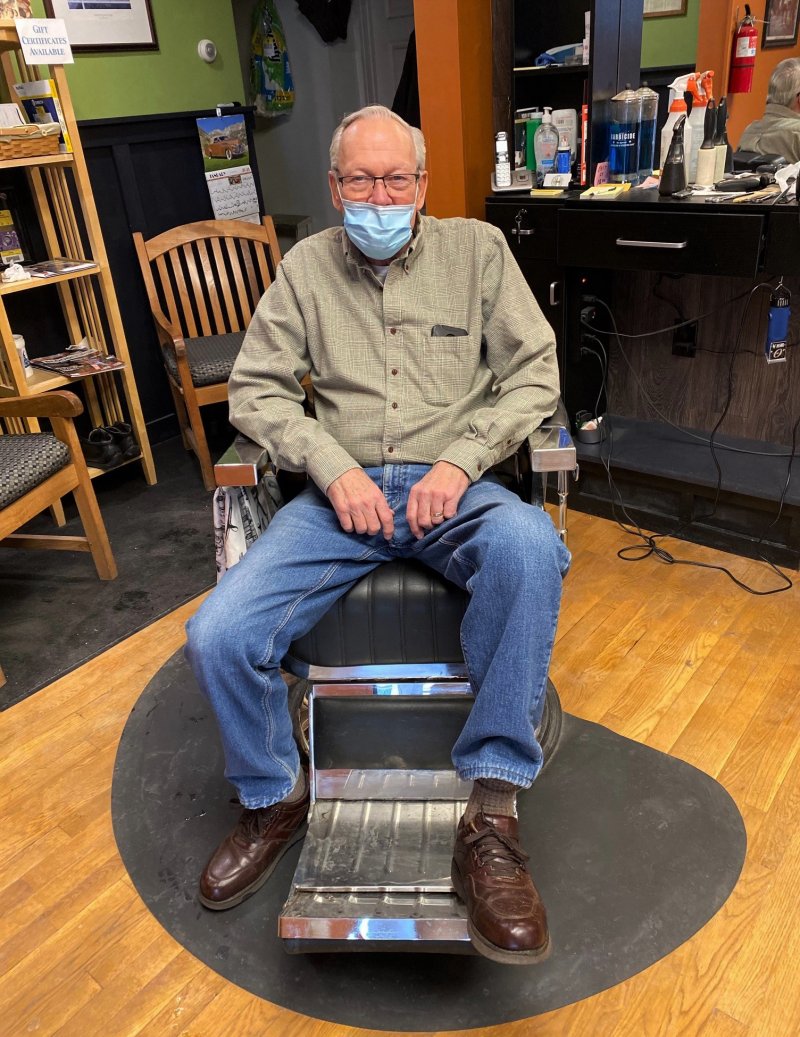 Larry Jenks poses in the barber’s chair inside Larry’s Barbershop on Washington Street on Feb. 2, 2021. He recently celebrated 50 years in the business. Photo by Thomas Dimopoulos.

SARATOGA SPRINGS — You can find him standing behind the barber’s chair, five days a week, inside of the red brick building on Washington Street where the front door entryway is flanked by the spinning red, white and blue colors of a barber pole, and a flat metal sign that tells you you’ve arrived at Larry’s Barbershop.

It is a station where he has stood for more than 50 of his 77 years, and since the year The Beatles broke up, since actor George C. Scott played U.S. General George Patton on the silver screen, when a gallon of gas set you back thirty-six cents.

“I worked in Glenville when I first started, then I came up to Saratoga and bought the barber shop on Van Dam Street from Tom McTygue,” Jenks recalls. “There was about 10 years there, 20 years across the street from Wendy’s where the hospital property is now, and then I came over here, about 20 years ago.”

He was born in Corinth grew up in his mother’s native village of Ballston Spa, and after high school joined the Navy where he was stationed on an aircraft carrier overseas during the 1960s. He came home and secured a job with GE working in the turbine business when he made the career shift.

“My wife was a beautician, and I was working at GE when she suggested, ‘Why don’t you try barber-ing.’”  He went to barber school in Schenectady and that was that.

“Back then, the young men had long hair, but there was always a certain amount that had traditional haircuts,” he muses. “The styles change, but other than a term, they come back to be the same as they always were.”

He has had longtime customers over several decades and has watched a generation of local kids grow up and have their own kids.

What’s most surprising? “You’ll be talking to a group of young men and realize that they’ve never been in a barber shop before, because they’d always gone to a salon. College kids especially. Salons for years now have done men and women,” Jenks points out. “The barber shop caters to men, whereas the salons cater to both.”

There is also the traditional barber’s pole out front. “Oh yeah, that’s how we’ve always been identified.”  The history books teach that the red, white and blue identifier dates back several centuries to a time of the barber-surgeons - when haircutting was offered in addition to medical procedures performed.

Like most businesses, the era of COVID has been difficult.  “There’s no hollering back and forth like it usually is, because of the virus. Now it’s pretty subdued,” he says, gesturing to a board that hangs on the outside of the front door where people sign one at a time, and noting capacity restrictions in line with safety protocols.  “We’re very careful with masking and sanitizing and only one person per,” he says. The business was temporarily shuttered last year until hair salons and barber shops were allowed to re-open. Those first few weeks were exceptionally busy, with many in need of attention to their hair. Overall, he estimates there has been about a 60% loss of business compared to the time before the pandemic.

Jenks says if he hadn’t gone into the barber shop business, he most likely would have stayed at GE.

“I probably would have retired a long time ago,” he says, with a laugh. Someday, he will retire. “I don’t think about it, but I will someday, probably sooner than later for sure.”