Broadway Getting A Little Sweeter 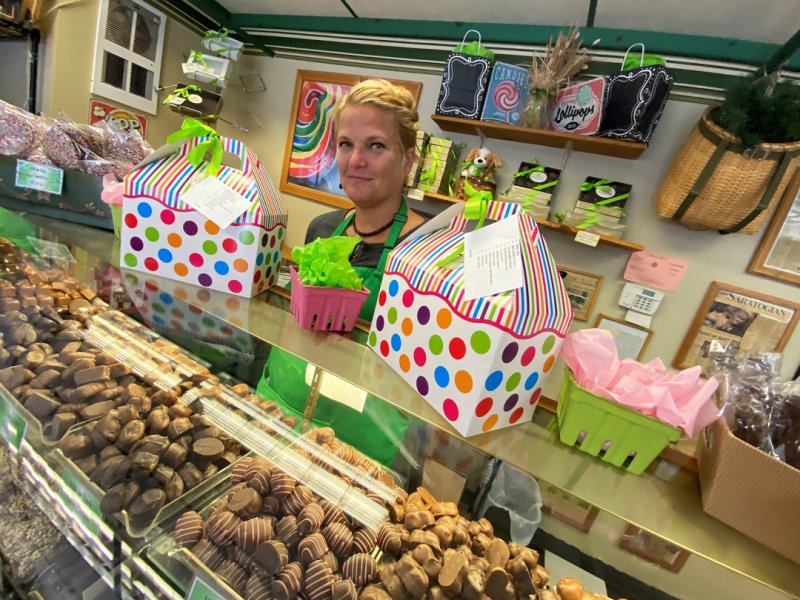 SARATOGA SPRINGS —Dawn Oesch stands behind the glass counter of the Saratoga Candy Company store as much as she has since first opening the doors of her Washington Street shop in July 1998.

Behind her, the colors of the rainbow swirl across lollipops and enticing candies. Newspaper clips dating back to the last century cling to the shelves.  “Oprah Winfrey magazine wrote about us,” she says. “We’ve been on MSN, and all the local channels. We talked about Christmas items on the Today show.” A dark chocolate salted nut roll beckons from beneath the countertop glass.

The area on and around Broadway has witnessed large-scale architectural changes since its development in the 19th century. The present day is no different.  A current proposal calls for a six-story project in a 200,000 square foot mixed-use building that will include 90 residential units and 31 hotel rooms at 353 Broadway/ 19 & 23 Washington St. The Broadway/ Washington Street corner café that sites Starbucks is anticipated to stay. The Saratoga Candy Co. building is targeted for demolition to make way for the new development.

Oesch has had three different landlords during her 23 years at 5 Washington St. Each has expressed interest in building a hotel on the site that houses the store. The current proposal is making its way through the city’s Land Use Boards.

“They’re saying late fall,” Oesch says. “If I had my druthers, I’d stay in my spot forever. It might not be the prettiest to some people but to me it’s perfect. I’ve spent more time in this space than anyplace else, even my home. It’s a part of me.”

The good news is her current landlord has expressed confidence that Saratoga Candy Co. can relocate right around the corner. “Right on Broadway, next to Starbucks, in a space just below Salt & Char.” The spot is semi-sublevel, “but when you look at the big giant windows, it comes right up to kids’ heads where they can look right in,” she explains.

Rent has yet to be discussed, but she is hopeful. “I do know they are very conscientious of a hometown feel store,” says Oesch, reflecting on her business as she starts her 24th year.

“It has changed so much. It’s adapted from something that I thought may be more fancy, to something that’s nostalgic. Finding everything you grew up with. Making it very kid-friendly, but also that thing you find that adults need.” One time-honored constant that has remained is her kettle. “The fudge kettle and I have been together since I was 16 and since I worked in a store in Lake Placid. It’s my baby,” she says, with a laugh.

Oesch is grateful to the community for helping the store survive the three-month shutdown of the pandemic.

“If we didn’t have our locals, we would have had a very tough time during COVID. We were delivering all over God’s Green Earth, and dressed like bunnies having car hops in the parking lot,” says Oesch, recalling the fulfillment of product orders while masked and gloved in themed events that featured socially distanced dance moves.

As the fall beckons, so with it comes Saratoga Candy Co.’s busiest season. There are the local specialties, like Saratoga Taffy and chocolate horse medallions, and much in-demand holiday items, like the old-fashion yuletide-inspired Peppermint Pig. That busy season may also be the time of the shop’s relocation. There is a plan.

“If we do move around the corner, I’m hoping I’ll be able to get every friend and family member together,” she says. “We can create a little candy train.” Right onto Broadway.

Read 2106 times
More in this category: « Why Are CD Rates So Low? A Tech Savvy Start-Up »
back to top