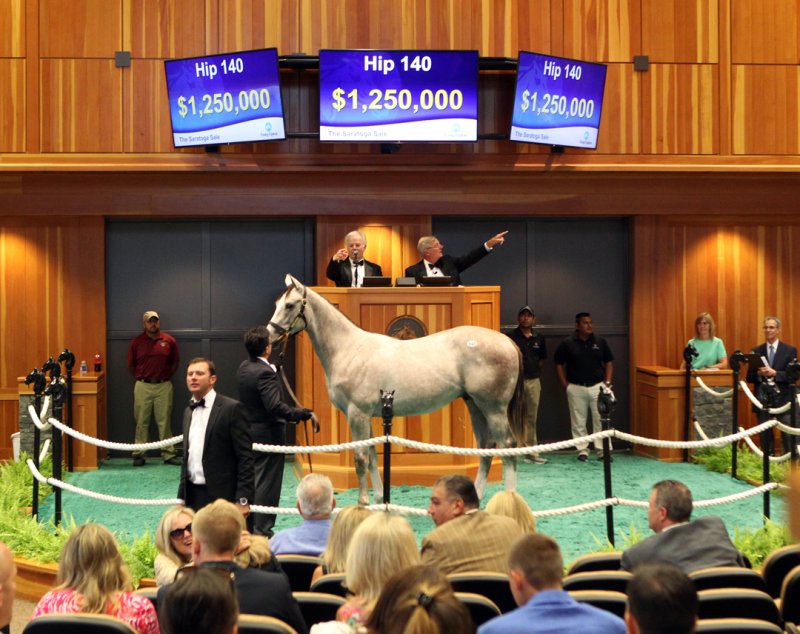 The Fasig-Tipton 100 Year Saratoga Sale auction celebration for selected yearlings will take place August 9-10 Monday and Tuesday evening at 630 p.m. On the grounds of the Humphrey S. Finney sales pavilion on George Street in Saratoga Springs with a kickoff ribbon cutting. This years selected yearling sale offering the best of the North American yearling crop will be one of historical significance. Due to last year’s pandemic shut down of the 2020 Saratoga Sale and the fact that the horse industry itself has maneuvered through a lot during these restrictions, it will be a celebration of genuine joy this August. The President and Chief Executive officer of Fasig Tipton Co., Boyd Browning summed up the excitement, “All of us at Fasig-Tipton are eagerly anticipating our 100th Saratoga Yearling Sale! We hope to have the sale of a century and erase the disappointment of not being able to conduct our sales last year due to COVID.” Manuel Hernandez, Plant manager from Fasig-Tipton relished the same mantra, “We are so happy to be reopening and to welcome everyone back to Saratoga for this historic sale. I also would like to thank my crew for all their hard work to get everything ready for the sale.” The skill and care that the horse industry has shown throughout this past year has been a model to follow for any industry. With fortitude and grace, they come to this celebratory kick off of 100 years with a grateful attitude. The fact that people will be able to watch in person is just a small blessing that will have huge rewards. Economically and socially, this will be a win. And in horse racing that is the word of the day! The ultimate goal is to WIN.

Back in the 1940s, Clarence Knapp, former Saratoga Mayor stated, “When I was young, I was strong in conviction, that Saratoga was the most beautiful place in the world. My conviction is stronger today.” This very well could be what The Saratoga Sale is creating on this historic year for horse owners, breeders, consignors, and observers. With the closure of the 2020 sale, this current year’s 100th selected yearling sale will be sure to be a beautiful evening with a major significance of magical proportion and commitment to quality.

This harkens back to the WWII years, when due to cargo transport limitations imposed on breeders, the Saratoga Sale was suspended from 1943-45. One can imagine what it felt like on the reopening of this sale in 1946.

The auctioneers voice following you as you walk under the shadowed trees on the revered grounds. The dark green barns creating a cinematic backdrop right out of a film set. The moon high in the sky watching over patrons as they wander the barns with hundreds of stalls, row after row, down dirt paths. Viewing these majestic equine animals, looking into their mystical eyes, peeking out from their stalls one after the other, awaiting their turn to be sold by the auctioneer to the highest bidder. Perusing their breeding lineage for any recognition of stardom knowing that this may be the one that will eventually win a top Stakes Race or possibly become a rare Triple Crown Winner. It is like being in a microcosm within a moment that all the onlookers are connected by one thing, this thoroughbred force of nature. The equus animal and human bond. We don’t understand why, but we are drawn to it. Ultimately, this is why this Saratoga Sale is a moment of moments that will be one for the history books.

Fasig-Tipton is the oldest auction company in North America. In 1917, The Saratoga Sale began annually with the exception of the mentioned WWII closure and the current pandemic shut down from 2020. This timeline brings this auction house to the 2021 hundred years yearling crop to be auctioned this week. According to Clark Brewster, Thoroughbred Horse Owner, “When major stakes races are run in this country, and for that matter around the world, one often sees entrants that were purchased from the Saratoga yearling sale. More than any other yearling sale, Saratoga stands out as the venue with the best offerings to purchase a champion. It’s 100-year history is a testament to that consistent excellence.” The prestige, the excitement wrapped with the tradition of The Spa is something irreplaceable. This year’s sale may be the biggest celebration yet.

There are many selected sale offerings from the best of the North American yearling crop that is anticipated to bring in millions of dollars this season. Over 200 yearlings will be auctioned. The great Man o’War sold as a yearling at the 1918 Saratoga Sale. Of the 13 Triple Crown past winners, two of the three offered at public auction were sold at a Fasig-Tipton sale. The Triple Crown 2015 American Pharaoh was sold at the 2013 Saratoga Sale. The anticipation for the upcoming sale doesn’t get more thrilling than that, knowing a future star may be sitting in the auction barns this week. Which one will be a Kentucky Derby entry or a Traver’s winner of the Midsummer Derby here at Saratoga Racecourse? There will always be a surprise horse with exceptional quality. This is what makes it exciting. There is value in what is sold here.

The legacy of this sale is rich in tradition. Starting with this 100 Year catalogue, Hip No. 1, will be a Dark Bay or Brown Colt from Empire Maker who sired 15 crops and 65 Winners including Royal Delta, champion Breeders’ Cup ladies Classic. In addition to Pioneer of the Nile, Emollient, Grace Hall, Bodemeister, Mushka and Acoma. Look for Hip No. 10, a Chestnut Colt from Justify who was the horse of the year champion, Kentucky Derby, Belmont, Preakness, Santa Anita Derby winner. His first foals are yearlings of 2021. The list goes on and on in the full catalogue of exceptional quality that will be viewed in the 100 Year edition.

With the pandemic economic recovery still looming in our minds, our small business community has been on an upswing and feeling economic vibrancy on their doorsteps. One restauranteur, Bob Lee, owner of the treasured Wishing Well Restaurant on Route 9 and the Brook Tavern on Union Avenue, only blocks away from the Fasig-Tipton pavilion, stated that, “Saratoga is fortunate to have six weeks of world class racing every summer, and sales week is the busiest, most exciting time of the meet. We’re glad it’s back.” His words ring true to all of us in the horse industry in addition to the natives and tourists of Saratoga Springs. We are certainly happy that this tradition is back and in full swing.

There will be electricity in the air on Monday evening. There will also be a feeling of gratitude to the consignors, the owners, the buyers and to Fasig-Tipton who make it all possible with these high-quality horses. As Hip No.1 is led from the walking ring through the doors of the auction pavilion, the gallery will be crowded with a group of horse worshipers singing out their litany of adoration, waiting for this defined moment. The lead up is a rite of passage in Saratoga’s social scene but more importantly, this year it will be more than that. It will be a moment of gathering in a world where we don’t take it for granted anymore. We will savor it and simply say “We’re glad it’s back.”

Read 1342 times
More in this category: « Saratoga Can Code Suit Up: Mark Thomas Men’s Apparel Coming to Broadway »
back to top