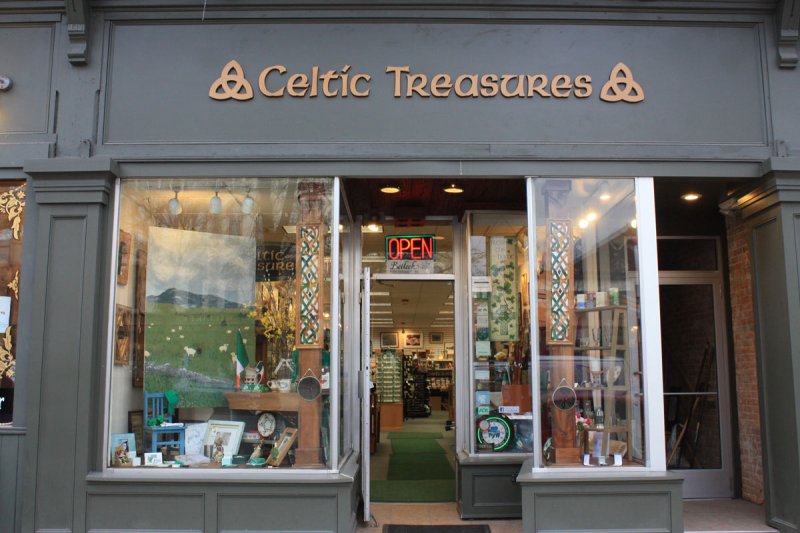 SARATOGA SPRINGS — Celtic Treasures, a premiere Irish gift shop located in the heart of downtown Saratoga Springs, is commemorating 30 years in business throughout the month of March.

Celtic Treasures, at 456 Broadway, is one of the largest importers of Irish gifts in upstate New York. Working directly with Irish manufacturers, Celtic Treasures offers some of the most hard-to-find Irish gifts both in-store and on their website, and prides themselves on filling special orders for their customers.

“Stepping into Celtic Treasures saves you a 6,000-mile round trip airfare to Ireland,” said Owner Paul O’Donnell, describing his store’s 30-year appeal in downtown Saratoga. “We cater to everyone from Irish immigrants who miss home to 4th generation Irish who are interested in looking up their family history, as well as everyone in-between.”

Celtic Treasures opened at their current location in 1995. The prior three years they were located right next door, where Saratoga Marketplace is now. Paul credits the success of the store to his employees, his wife Antoinette, and their loyal customers.

Although their official birthday weekend has passed (March 11 – March 13), they are celebrating this milestone all month long. Upcoming on March 17 – 20, is the “Anything Green T-Shirt Sale” that will also include 20% off featured merchandise and 20% off all compact discs.

You can also find authentic, made in Ireland pottery, china and more at Celtic Treasures. A big seller is their Claddagh rings – a traditional Irish ring that features two hands around a heart with a crown representing friendship, love, and loyalty.

More so, Celtic Treasures also has a dedicated section to Irish foods. Paul remarked that during the first wave of COVID their Irish teas and biscuits were flying off the shelves.

Paul’s mother Annie was the inspiration behind Celtic Treasures, as she hails from County Cavan, Ireland, and Paul spent many summers on his grandparents’ farm in Ireland since he was four years old. Paul’s father Eddie also takes part in the business, providing hands-on assistance with bookkeeping and is known as their CFO, or “Celtic Financial Officer.”

“That really instituted my love of Ireland from an early age,” said Paul. “That was the seed of this business.”

Paul and Celtic Treasures also support others in Saratoga’s Irish community, as Paul is a co-sponsor of the weekly open Irish jam sessions at The Parting Glass every Wednesday from 7 p.m. to 10 p.m.

Celtic Treasures is open seven days a week. Their online store is open 24/7 at shop.celtictreasures.com. Celtic Treasures offer curbsides pick-up and shipping anywhere in the US and Canada. For more information visit CelticTreasures.com or call 518-583-9452.

“From Cadbury chocolate to Galway crystal, we have it all here for you at Celtic Treasures and we’ve been here for you for the past 30 years! Come celebrate our Anniversary with us!”

More in this category: « Local Businesses Selling T-Shirts for Ukraine Time to Honor Those Who Led Our Renaissance »
back to top