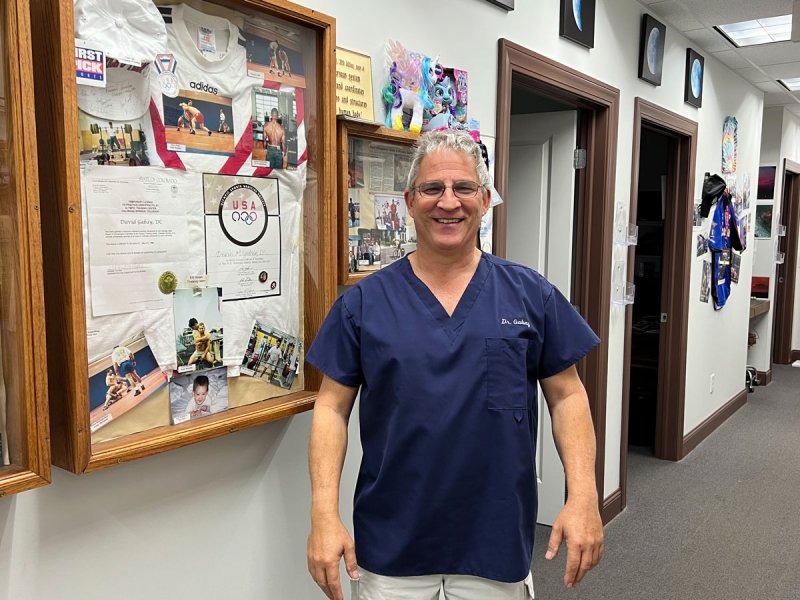 SARATOGA SPRINGS — After over 40 years as a practicing chiropractor, Dr. David Gabay is calling it a career at the end of the year.

Gabay, who is based in Saratoga Springs, has run his own practice since 1982, and has also worked with collegiate, professional, and Olympic athletes among many other highlights. He said he first took an interest in chiropractics after a bicycle accident in his early teen years.

“When I was 13 or 14, I was on a bicycle on Western Avenue in Albany. I got hit by a car, fractured my mandible in a couple places, my clavicle, my scapula,” Gabay said. “But I had terrible headaches for months and months. I went to a pediatrician, a neurologist, an orthopedist. Nobody could fix them, they don’t know where they’re coming from.”

Eventually, his mother took him to a chiropractor, and after, “I think three visits, boom, the headaches were gone.”

“I always remembered that,” said Gabay.

After Gabay’s father passed away, the family moved to Long Island, where his mother’s job at SUNY Stony Brook allowed him to shadow various medical professionals.

“I spent a week with a local chiropractor there, and then it hit me. That’s what I want to do,” Gabay said. “I think I had one semester left at Stony Brook. I applied to New York Chiropractic College. I got the early admission letter, and that started my career.”

After graduating, Gabay considered working at a pre-existing practice, but ultimately decided to return to the Capital Region to open up one of his own.

“These are my roots,” Gabay said of returning to the area. “It was a matter of giving back to the community and staying where I grew up. It’s a part of me. That was a huge part of it.”

“I found a little two-room office across from the hospital, bought used furniture, refinished the desk,” Gabay continued, noting much of the early office supplies were purchased second-hand. “I started out with kind of a hodge-podge outfit, and just built from that point on.”

In addition to his practice, Gabay also served as a team chiropractor at Skidmore College, and had an assortment of exciting opportunities outside the local area. Gabay worked with athletes in Colorado Springs prior to the 1996 Summer Olympics, which were held in Atlanta, Georgia, participated in monthly observations with the New York Giants, and worked with the New York City Ballet.

Gabay worked with athletes such as two-time Olympic gold medalist wrestler Bruce Baumgartner, who took bronze in the 1996 Games, and gold medalist and future WWE star Kurt Angle. He also assisted the Algerian national teams, who Gabay said could not afford their own medical staff at the ‘96 Games.

“He and I became good friends. We got him a full scholarship to New York Chiropractic College as an Olympic athlete, and he’s up in Lake Placid now,” Gabay said. “He runs the bobsled program, the Paralympic program, and has a small practice up there. That was another friendship that has remained throughout the years.”

And although Gabay is retiring, his practice won’t be going anywhere. Dr. Nabilah Kabir, a graduate of Skidmore College and New York Chiropractic College, will take over Gabay’s office on January 1, 2023. Kabir first began working with Gabay almost five years ago and has been working with the doctor to treat patients together and smoothen the transition in the new year.

“I had just graduated from chiropractic school. I wasn’t sure yet if I wanted to start on my own or if I wanted to associate with someone,” said Kabir of meeting Gabay. “I had come in to meet with Dr. Gabay, and he had needed some help when he was on vacation. He had me come in and start treating patients.”

“Nabilah’s kind of been my go-to individual when I needed help, and it was a really logical, easy transition, because a lot of the patients knew her already,” Gabay said. “She knows my practice style, how I do things. So when it came time to say, ‘OK, it’s finally time to retire,’ here we are.”

Gabay said “99%” of his patients are happy with the transition, noting that continuity is important in the field.

Kabir lived in Bangladesh for 10 years, she said, and also spent part of her childhood in the Town of Berlin before graduating from Troy High School. She runs her own practice in Clifton Park, saying she is transitioning her patients to Gabay’s office at 550 Maple Avenue.

After more than 40 years of experience, Gabay said one thing he has learned is to “listen to the patient.”

“Most of the time when they come in, watch how they walk. Watch how they get up from a chair. Find out what’s going on in their lives emotionally, with family. Because health and musculoskeletal problems are usually not just single factors, but they’re multi-factorial,” said Gabay. “What I’ve learned is shut your mouth, open up your ears. Listen and look, and the patient, 85% of the time, is going to tell you what’s wrong with them.”

Now that he is retiring, Gabay said he plans to spend time traveling and in his workshop, where he works to restore cars.

“I just built a retirement house out in Wilton, and I’ve got a 40-by-60 workshop out there, with woodworking, metalworking,” Gabay said. “I can work on my cars. I’ve got a lift there. And the big thing, I’m going to be traveling and starting to relax.”

However, he will not be totally distanced from the profession. Gabay will still be filling in for Kabir when needed at the practice, and also said he will likely continue to travel to symposiums “once or twice a year,” and is considering recording instructional videos for younger chiropractic or teaching, having formerly done so at Skidmore College.

“There’s a lot of open doors and possibilities, I guess is what I’m trying to say,” said Gabay.

And after 40 years, Gabay said the final moments of his career and the practice’s transition are bittersweet.

“I think it’s like sending a kid off to kindergarten on his first day, or sending a kid off to college,” said Gabay of his retirement and the transition. “It’s a milestone in your life that you’ve worked for, really hard. When it gets there, it’s a little difficult. But you know you’re sending things in a good direction.”

More in this category: « Saratoga Casino Hotel Donates $120,000 To Local Non-Profits GlobalFoundries Named One of ‘America’s Most Responsible Companies’ »
back to top