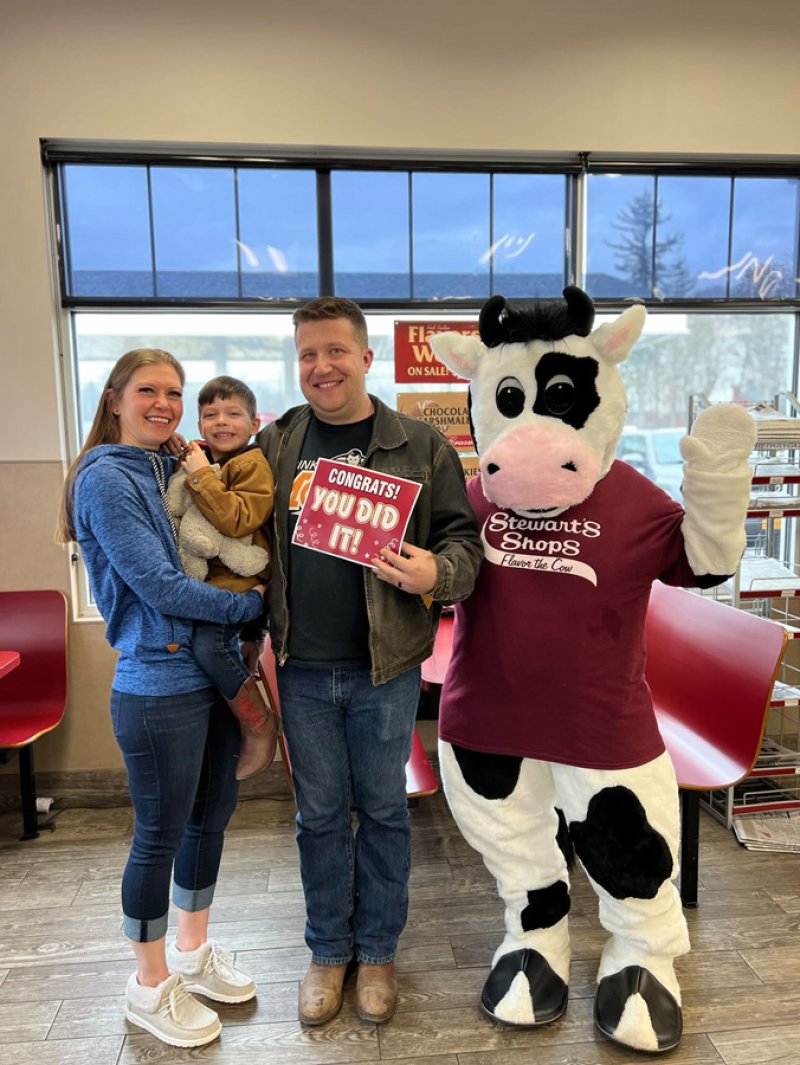 Kristin and Augie Freemann, along with their son Kody, spent 2022 traveling across the state to visit every available Stewart’s location. Photo provided by Kristin Freemann.

CAIRO — Stewart’s Shops, one of the area’s most beloved businesses, has spread its operations throughout New York State and Vermont. And one family has seen them all.

Kristin and Augie Freemann, along with their son Kody, spent 2022 traveling across the state to visit every available Stewart’s location.

Augie Freemann said the idea came about after hearing of a couple who visited every Cracker Barrel location in the United States.

“I said to my wife, ‘Oh, that’s something we would do.’ And she said, ‘Yeah, we could go to every Stewart’s’,” said Freemann. “We looked into it, and it seemed feasible, so here we are.”

To up the challenge for themselves, the Freemanns decided they would visit every Stewart’s location within a calendar year. Residents of Cairo, the family began on Jan. 1, 2022, visiting nearby locations in Cairo and Greenville.

They also received some assistance from Stewart’s themselves. Kristin Freemann said the company shared a spreadsheet with the family, containing information about all of their locations.

“We’d pick a weekend and say, ‘Where do we want to go?’” said Kristin Freemann. “We would map out and also kind of decide how many we wanted to do in a given day.”

Stewart’s currently has 358 locations, the Freemanns said. While the Cairo and Greenville locations are relatively close to the family, some stores took quite a bit of driving.

“Some we had to be a little more strategic with, like any that were out in St. Lawrence County, out in Potsdam, Malone, and the ones that were up by Plattsburgh,” said Kristin Freemann. “Those we actually did as a weekend trip.”

The family said it was “really nice” to be able to see parts of the state they typically would not have traveled to.

“Up by Plattsburgh and Lake Champlain is beautiful, and we hadn’t really ever spent a lot of time up there,” said Kristin Freemann. “Same with the St. Lawrence area, Thousand Islands, out that way was beautiful. So, it was really nice.”

They also reconnected with old friends along the way, with Freemann saying she met up with a friend who currently lives in Potsdam while the family was in the area.

“It actually became fun,” Freemann said. “I know people think we’re crazy. It was kind of a silly, crazy thing to do. ...We didn’t have any reason to do this other than it was a silly, fun thing to do as a family.”

As part of the challenge, the family had to purchase a product at each location.

“All three of us had to physically go into every single store, and we had to purchase something at every store,” said Kristin Freemann. “Fuel did not count. We obviously had to buy gas or whatever, but we would buy a product of some kind, at least one, at every store. … (Kody) got to pick a lot of the snacks, that was the fun part.”

Kody said his favorite snack from the experience was the gummies. The family said a majority of the stores had mostly similar offerings but did note some variety throughout the state.

“Especially when it came to their hot foods,” said Kristin Freemann. “Some would have a specific kind of breakfast sandwich, or a specific kind of chicken sandwich. There were times where we would find things that we hadn’t seen in other stores.”

The family also said one constant was the staff, who Kristin Freemann said were “so nice” at every location.

“All of the employees at every single store, across the board, were really friendly. That’s something that’s hard to say about a chain,” Freemann said. “Every single store we went into, everyone was really nice.”

“We strategically planned that as well,” said Kristin Freemann. “Because Saratoga County had the most, but they’re also very close together, we knew that if we left Saratoga County kind of to the end, that we would be able to make it work.”

“Kody was concerned though, when we went into our last store, he said, ‘So does this mean we can’t go to Stewart’s anymore?’,” said Kristin Freemann. “I said, ‘Nope, we just don’t have to drive really far to go to Stewart’s now.”

Ultimately, what began as the Freemann’s quest to visit every location of a beloved local chain turned into nearly a full year of quality time and fun as a family.

“It was really nice that we could just do something that was silly and fun, for no other reason than just to spend time with each other,” said Kristin Freemann. “We were able to spend quality time together, do something fun, and see parts of the state that we never get to see.

“Even those weekend trips we did where we were away, we did other things than go to Stewart’s. We would make a point to go on a hike somewhere. When we were in the Thousand Islands, we went and visited Boldt Castle. … It was really nice spending quality family time together just for fun. There was no reason for us to do this other than that.”