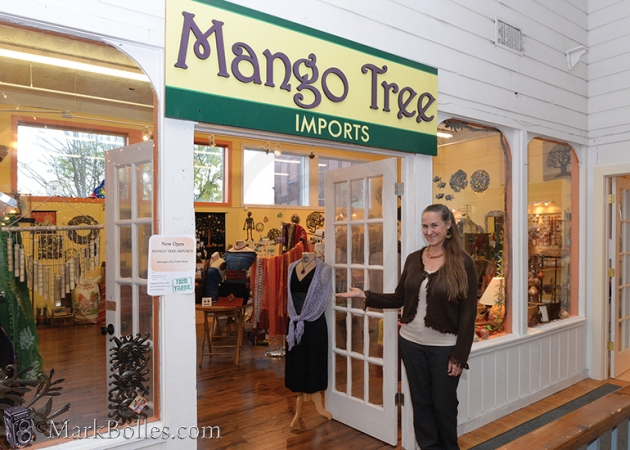 Mango Tree Imports is located at 454 Broadway. Photo by www.MarkBolles.com

SARATOGA SPRINGS – Saratoga Marketplace, located at 454 Broadway, has welcomed a new addition to its retail space – Mango Tree Imports. The fair trade store opened its doors in Saratoga Springs two weeks ago, offering unique items to the community. All products in the store are handmade from the developing world.

“There’s an array of color and products that are all natural, handmade from the developing world and all fairly traded,” said Kim Andersen, Mango Tree co-owner. “It’s also a global-cultural experience between the international music, the products and the map so people can see where everything is from.”

Mango Tree Imports is the brainchild of Chris and Kim Andersen, who started the store in 2006 in Ballston Spa. Educators by trade, Chris and Kim moved to Paraguay in 1998 to teach English at the American School of Asunción.

“We were surrounded by the red earth and rural lifestyle, mango trees all over the country,” said Kim. “When we moved to New York we wanted to find a way to stay in touch with the country and to keep our ties with some of the people we had met and the art that we fell in love with.”

One of the first products the Andersen’s imported was Paraguayan silver filigree. The unique art of filigree was first introduced to Latin America by Spanish conquistadors. The artist transforms a nugget of silver into a small rectangle by melting and cooling it. The rectangle is then fed into a rustic press thousands of times until a fine silver thread, hundreds of times the original length, emerges. The jeweler then begins the delicate procedure of doubling and twisting individual threads into ornate, finely-rendered designs. Paraguayan silver filigree jewelry can be found at the store.

Bandhani silk scarves can also be found on display at Mango Tree. Although the beautiful scarves from Western India look embroidered, the patterns and puckers result completely from meticulous tie-dying. The technique is known as Bandhani. First, an intricate design is printed in non-permanent ink onto the fabric. Women then follow the design as they tie dozens of tiny knots and carefully dip the fabric in colored dyes to achieve the results you see.

Since opening the store, Mango Tree Imports now offers products from 65 countries. From jewelry and scarves, to wall hangings and home décor, every product is unique; but most importantly, fairly traded.

“Fair trade is a way of doing business with the developing world,” said Kim. “We like to let people know that it’s not charity, it is capitalism, and it’s a true business model. The purpose behind it is poverty alleviation in the developing world. Fair trade, at the surface, there are a few main principles that we focus on. One is fair wages to producers, like farmers or artisans; no child labor; care for the environment; democratic workplaces. Fair trade is about working with the farmers and artisans to ensure they’re making a living wage and have safe working conditions. “

Mango Tree Imports is the only locally-owned store in the Capital Region that is 100 percent committed to fair trade and was instrumental in Ballston Spa becoming New York’s first fair trade town. Kim says she hopes to bring fair trade awareness to Mango Tree’s new home in Saratoga Springs.

“The decision to be in Saratoga was a multi-faceted decision,” said Kim. “We realized it was time to move our two language schools, which are Capital Region Language Center and Empire State English, to Saratoga. We miss the synergy between the schools and the store. Being in Saratoga, being on Broadway will hopefully lead to more customers and the more customers we have, the better it is for the developing world, so there’s that effect as well.  The third reason…it seemed like it was the time for a location shift.”

While Mango Tree Imports has only been a resident of Saratoga Springs for about two weeks, Kim said she’s enjoying Saratoga Marketplace so far and loves meeting the store’s neighbors.

Goals for Mango Tree include increasing its customer base, looking for partnerships in the area, and hosting events like fair trade chocolate and wine tastings, and share the importance of fair trade.

“We’re all very, very connected whether or not we realize it on a daily basis,” said Kim. “The actions on a daily basis that we take as consumers in the U.S. or in Saratoga County, they have an impact on the person on the other end of the product. I think the more we can be aware that we’re all connected, the more our choices will be influenced.”

More in this category: « Business Briefs New Business in Town Aims to Help School Sports Teams »
back to top