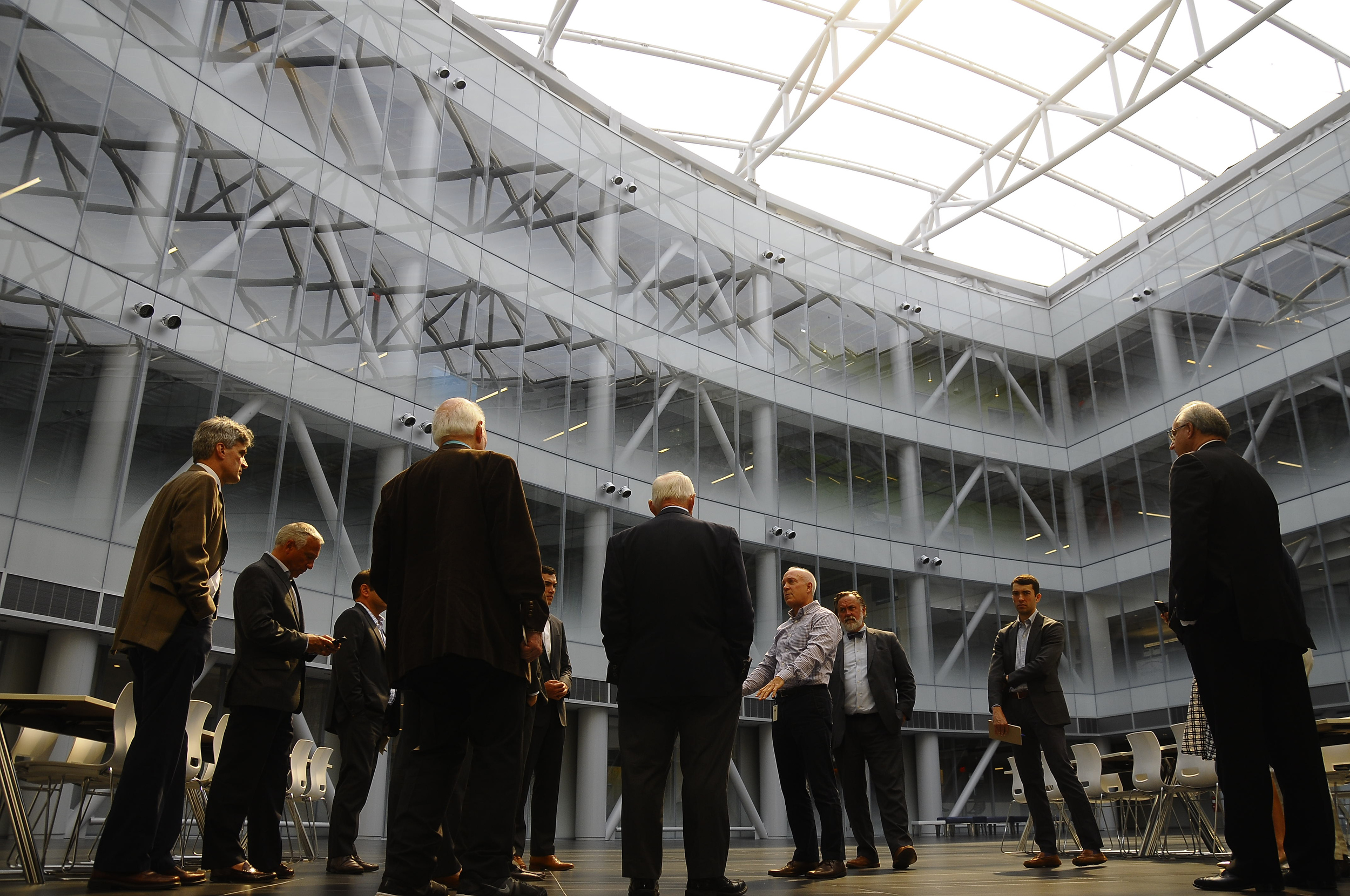 In photos (from left): SUNY professor Michael Fancher (center, right) discusses the future of interior spaces in the ZEN building atrium at the Colleges of Nanoscale Science and Engineering in Albany; Fancher describing the layout of SUNY Poly’s Albany campus; Tom Lawton of New Jersey observing a SUNY Poly clean room; SUNY Poly tour guide Alex Oscilowski (center) offers an explanation; Marty Vanags (center, in bow tie) and Shelby Schneider of the Saratoga County Prosperity Partnership with the tour group at GlobalFoundries on Aug. 28; and a hallway view of front-opening unified pods, or FOUPs, at SUNY Poly. Images by www.photoandgraphic.com.

SARATOGA SPRINGS – In the comfort of a shuttle bus that departed from a city hotel, and through informative personal visits, leaders of the Saratoga County Prosperity Partnership (SCPP) promoted both regional culture and local commercial sites this week to potential investors from as far away as Texas.

Marty Vanags, the SCPP president, and Shelby Schneider, the agency’s business-retention and expansion specialist, took turns on a bus tour Monday describing how steady streams of people routinely golf, bike, walk and run (or fill up jugs of famously healthy spring water) in the Saratoga Spa State Park; as well as the daily operations of companies in the Grande Industrial Park, including Quad/Graphics and Ball Metal.

The small Embassy Suites bus chartered by SCPP—the county’s official economic-development agency, with an annual budget of $775,000—passed next through the Target and Ace Hardware distribution sites near Adirondack Northway Exit 16; then proceeded to the Exit 12 campus of State Farm Insurance in Malta.

As part of a corporate consolidation at the campus, Vanags informed the eight consultants on board, an office building was recently vacated by State Farm employees and is ready for a new commercial tenant.

Schneider and Vanags made a point of revealing precisely how many acres are available for commercial development at the locations visited.

In addition, the SCPP had invited Austin Dimitri of Cushman and Wakefield in New York City, another large real-estate brokerage; Mitch Jacoby of Beacon Street Realty Advisors in Boston; and Tom Lawton of Webster Global Site Selectors in New Jersey.

The Embassy Suites bus also went beyond Saratoga County’s borders for a walking tour of the SUNY Colleges of Nanoscale Science and Engineering in Albany (commonly called SUNY Poly).

Michael Fancher, a SUNY professor and “nanoeconomics” expert, led Schneider, Vanags and the consultants through several parts of the facility, answering their specific questions about the rapid advancement of technology since SUNY Poly’s Albany campus was established with state support several years ago.

Alex Oscilowski, a spokesman for Tokyo Electron, joined Fancher in guiding that part of the tour. Tokyo Electron is a primary corporate sponsor of research at SUNY Poly.

“Nanotech is driving a much closer collaboration,” Fancher explained, between large companies that are normally staunch competitors. That filters down to the local level, he added, compelling “low-tech” businesses in the “supply chain” to find ways of being more efficient.

Fancher opined that “integration” of various types of technology will be a dominant theme in the future, especially benefitting fields such as “biologics” and hastening the development of “smart cities.”

And he praised New York State officials for enabling collaborative efforts to flourish at SUNY Poly, alongside cutting-edge research into data storage, analytics and cyber security.

“It’s very unique to have this together in a university,” Fancher said, adding later that local school districts have been encouraged to “build a pipeline of students” focused on science, technology, engineering and math as a means to continue the most relevant research at SUNY Poly.

One of the consultants had pressed Fancher and Oscilowski about the presence of hazardous chemicals and materials. “The point is you can handle them safely, and that’s what we do,” Oscilowski responded.

Jack Sloan, a Skidmore College senior along for the tour, did not hesitate to express his satisfaction as the prosperity partnership’s summer intern.

“You learn so much,” Sloan said of his experiences at SCPP. “It was great.”

Schneider, Sloan, Vanags and their guests returned to Saratoga County for a close-up view of GlobalFoundries and the Fab 8 complex. A photographer and reporter for Saratoga TODAY were denied access to that part of the tour.

In a subsequent email, Vanags said “plenty of team members” in the SCPP office on Route 9 in Malta made the promotional trip possible with many hours of phone calls and arrangements, etc.—a first for the two-year-old county agency. He added that SCPP and the consultants’ firms shared travel expenses.

The bus tour was preceded by a welcome reception on Sunday hosted by the Saratoga Polo Association. Saratoga Springs Mayor Joanne Yepsen and county Supervisors Jack Lawler and Matthew Veitch were among those in attendance.

The cultural exposure for the eight businessmen continued Monday afternoon with a visit to the Saratoga Race Course. According to Vanags, that was followed by another dinner with key representatives of Empire State Development, the Center for Economic Growth and the Capital Region Economic Advisory Board.

“Usually,” Vanags said, “the site selectors don’t have an ongoing project slated for the region or community in which they agree to attend” such a familiarizing, or “fam,” tour. “The ethics on that would be too fraught with issues.

“Instead this is an opportunity for us to build a relationship with them to plan future projects,” he summarized. “They need information about communities and they usually need it quickly. This is all part of the long-term economic development sales process.”

More in this category: « Dozens Enjoyed Travers Day Massages for Charity Small Business Grants Available in Ballston »
back to top