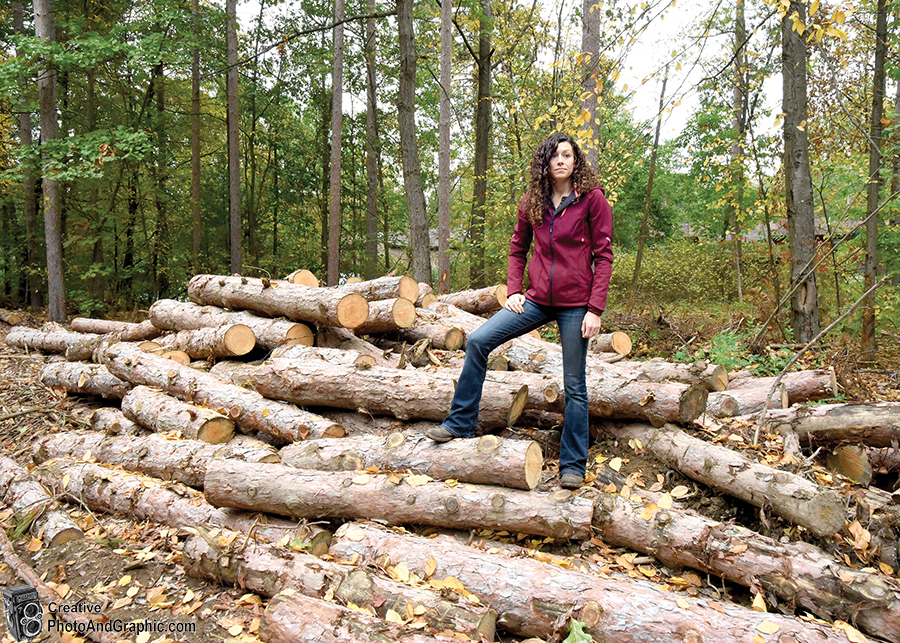 Marissa Mackay on a pile of harvested red pine; and scenes from a recent tour through Luther Forest given by Mackay. Photos by www.photoandgraphic.com.

MALTA – In recent months, a legal dispute has been escalating between Luther Forest homeowners and the company that literally created the forest in the towns of Malta and Stillwater more than a century ago.

The Luther Forest Corp., managed by siblings Marissa and Cailean Mackay, has long retained the legal rights to harvest mature stands of trees in the 335 acres of “common areas” scattered throughout the Luther Forest neighborhoods.

Marissa Mackay says “sustainable” logging operations take place in those common areas roughly every 15 or 20 years. A new round of tree cutting began in April, she explained, and is expected to continue through the winter.

In recent months, though, a number of Luther Forest homeowners have expressed opposition to the Mackays’ logging operations. Some have made appearances at Malta Town Board meetings to voice complaints, only to be told by officials that the town has no legal right to intervene.

The Fox Wander West Homeowners’ Association has filed suit against Luther Forest Corp. in Saratoga Supreme Court, claiming that the company is liable for “hazardous trees” left behind as well as damages to recreational trails caused by heavy machinery during the logging operations.

Penny Kretchmer, the association’s president, did not return repeated requests for comment.

A woman answering the phone for Walsh and Walsh, the Saratoga Springs firm that represents the Fox Wander West association, said attorneys there “prefer not to comment.”

On the neighborhood association’s website (http://www.foxwanderwesthoa.com), “an important message about trees” is on the front page: “After reviewing the deeds and original offer documents for the forest,” the message says, “it's clear that The Luther Forest Corporation is responsible for hazardous trees.”

Video messages on Facebook, under the title “Save Our Forest,” have been appearing in recent days condemning the Mackays’ logging operations.

“Farming trees right up to someone’s property line and leaving nothing left but a huge mess is not respectful,” posted one “Save Our Forest” commenter. “Destroying our trails that have existed for decades and leaving the repair costs for the residents is not respectful…We are tired of being disrespected.”

Mackay disagreed, noting how, after logging in Luther Forest common areas began in April, she had communicated promptly with about 50 homeowners to address concerns regarding fallen trees near their property. “I made a point to be available,” she said.

Mackay has organized a forum on Tuesday, Oct. 17 at 5 p.m. for residents to get more information about the logging process in Luther Forest. It will be held at 2 Fox Wander Road, in one of the first areas cleared of trees this year.

Previously, Mackay said, letters announcing the start of logging operations were sent to each of the three main neighborhood associations in Luther Forest. This is the “loudest” residents have ever been about the tree cutting, she added.

Heidi Brooks, who recently resigned as vice president of the Fox Wander East Homeowners’ Association, opined that its directors “are keeping a lot of information from the homeowners.”

Brooks has communicated regularly with Mackay, attempting to clarify the process for other homeowners.

Yet Brooks also expressed concern for damages to trails, and for veterans in Luther Forest who are sensitive to the “loud crack” and noticeable vibrations of a tree falling.

“I think that people forget that a forest isn’t meant to be a park,” Mackay said this week in response to such concerns, during a tour of the “logging headers” in common areas that recent work crews created as staging areas for fallen trees. “When you decide to go walking in the forest, you might have to step over something—like that root I just caught my toe on.”

“The tops of the trees and the stumps have a lot of nutrients in them. We want them to stay here and rot, and feed what’s left,” Mackay added, as she walked the same trails that were created by her grandparents as part of a legal agreement with the original Luther Forest homeowners’ associations.

She explained that Luther Forest Corp. is harvesting trees year-round on 3,200 more acres owned by the Mackays, down from the original 7,000 acres belonging to their ancestor Tom Luther.

“We almost always have a crew on property somewhere,” Mackay said. “It just so happens that we have a lot of neighbors over in this neck of the woods.”

The company that cuts down most of the trees is Saratoga Land Management, which was started by Mackay's grandfather and later managed by her father, Alexander, a retired certified forester who now lives in New Hampshire.

Mackay said the cutting crews approach every tree they harvest as seasoned professionals. “I can probably put a can down, and they can drop it on the can,” she said. “They’re good at what they do. That’s why they do it.”

She also hopes Luther Forest residents will understand the long-term role her family has played in preserving the health of the area’s trees, albeit through the constant logging.

“You come in and you do that selective harvest to try to make sure that you allow the species that are more desirable, that are stronger in this environment, the proper space and nutrients that they need so you can have stronger species be the ones that are regenerating and surviving,” Mackay said.

More in this category: « TV Producer Joins Hospice House Board New Lawyer in Town »
back to top