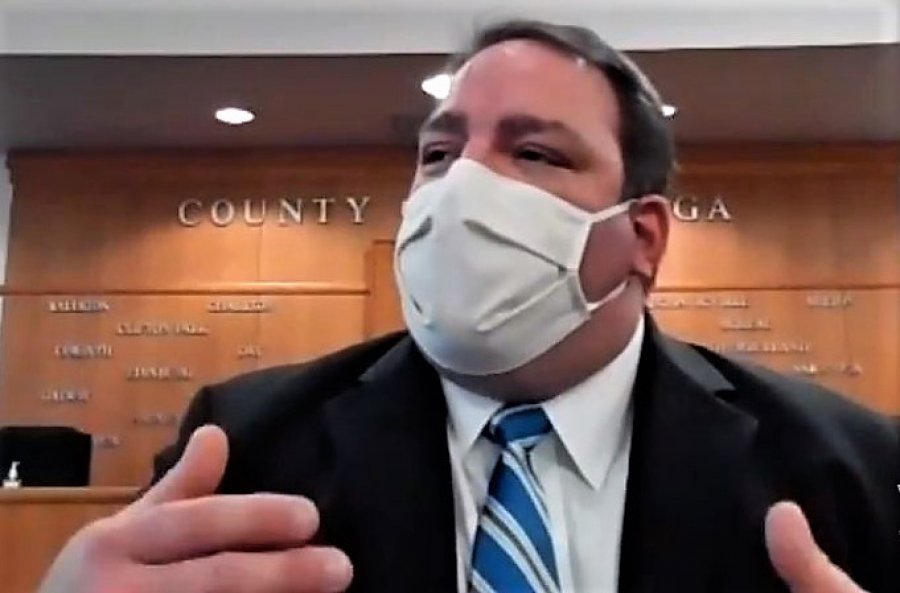 BALLSTON SPA — Dr. Daniel Kuhles, the county’s new Commissioner of Public Health, held a live forum Dec. 4, when he provided a regional and state overview related to COVID-19 strategies, as well as an update of the pending federal vaccination program.

Kuhles, a resident of Saratoga Springs and a medical doctor, was appointed to the newly created Commissioner position in November following a four-month-long search for candidates by the county Board of Supervisors. The position carries a base salary of $132,446 and a term of six years. Job responsibilities include directing, managing and regulating the Department’s delivery of public health services throughout Saratoga County.

The 53-minute forum, first broadcast live on Dec. 4, may be viewed at the Saratoga County Public Health Services Facebook page.

Infection percentage rates in Saratoga County have doubled each month since August, and topped 4% this week on a rolling 7-day average, marking the highest infection rate since mid-May.

“The overall trend is going upwards in a direction we do not want to see it go,” Kuhles says.

Regional hospitalization rates due to COVID-19 – one of the biggest criteria the state says it now will use to determine potential shutdown strategies - was at an all-time high this week, with over 220 COVID-19 patients hospitalized in the eight-county Capital Region designation, of which Saratoga County is a part.

During his presser Dec. 7, Gov. Andrew Cuomo was joined by Dr. Anthony Fauci, longtime director of the National Institute of Allergy and Infectious Diseases, who warned of a potential “dark time” in January if public health measures such as mask-wearing, social distancing and attention to detail during even small gatherings are not followed. The result of gatherings during the Thanksgiving holiday will become evident Dec. 15-20, he said, followed by a potential surge if additional gatherings are held during the December holidays.

“Potentially, a surge upon a surge,” Fauci said. “If those things happen and we don’t mitigate well, we don’t listen to the public health measures we need to follow, we can start to see things really get bad in the middle of January…the middle of January could be a really dark time for us.”

Regarding vaccinations, Fauci said he anticipated a substantial number of health care providers and people in nursing homes will begin receiving vaccinations later this month, with essential workers and those at high-risk due to health issues having the ability to be vaccinated in the early months of 2021.

The vaccination(s) require two shots.  “Say you get vaccinated today, then you get a boost 28 days later, and 7 to 10 days after that second shot, you’re optimally protected,” Fauci explained.

“I would think by the time you get to the beginning of April, you’ll start getting people who have no priority, just a normal person who has no underlying conditions. If we get them vaccinated, a full-court press, and you do that through April, May and June, by the time you get to the summer, the end of the summer and the start of the third quarter of 2021 – we should be in good shape. That’s what I’m hoping for,” Fauci said.