• The council approved a resolution that allows local restaurants to begin outdoor seating on Monday, March 15. A similar temporary resolution was first initiated in 2020 to assist restaurants limited in their indoor occupancy due to pandemic protocols, and ultimately expired Dec. 31. “This resolution (in 2020) significantly impacted the city eating and drinking establishments,” said city Director of Risk and Safety Marilyn Rivers. “We’re looking forward to a very robust tourist season.”

• Should President Biden’s $1.9 trillion stimulus plan receive Senate approval, the city of Saratoga Springs is anticipating the receipt of approximately $7 million of the $440 million overall funds estimated for municipalities in Paul Tonko’s 20th Congressional District, Finance Commissioner Michele Madigan said this week. The majority of those funds - about $5 million – will cover the city’s 2021 retirement costs, Madigan added. The remaining $2 million will assist in covering revenue, the specific details of which were
not discussed.

• Police Reform Task Force. Last August, the mayor appointed approximately one dozen members of the community to serve on the Saratoga Springs Police Reform Task Force. The move was in response to Gov. Andrew Cuomo’s June 2020 Executive Order requiring municipalities across the state to undertake a review - and with community input, develop a plan - to improve its existing police policies, practices and procedures by April 1, 2021.

• A public forum was held this week regarding a draft of the plan, and it will be presented to the City Council for review, said city attorney Vincent DeLeonardis. The council will ultimately decide which recommendations will be implemented as well as how they will be implemented. The council next meets March 16 and DeLeonardis said he anticipates a special City Council meeting will be held in late March to evaluate the plan, in advance of the April 1 deadline. 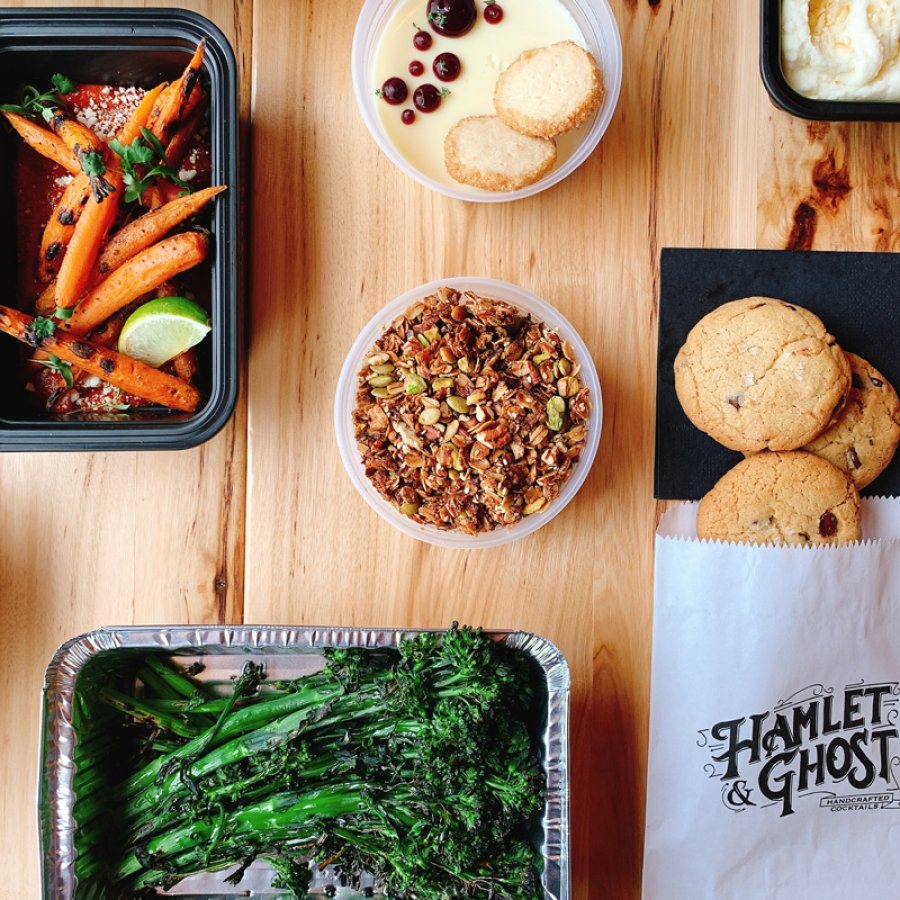 SARATOGA SPRINGS — The idea came to him, as good ideas sometimes do, while otherwise engaged in the seeming mundanities of everyday life.

Jacob Hopper and Dempsey, a yellow Lab, were out walking through Saratoga Springs. Hopper had started up the Evander and Louise lifestyle and travel brand, just as everything else around him began locking down.  March 1 was a heckuva time to launch a new business.

“Horrible timing,” Hopper admits. A lot of the work is centered on the partnerships he created with 17 different local restaurants.

“We know eating-out and taking-out can be a luxury for some people. And a lot of us are on limited incomes right now, watching the budget, but it’s really important that we support our small local businesses as much as we can. I think the more we can support them, the better we will be when we come out of this,” Hopper says.

“Well, we launched and then this all happened. I started thinking: what can I do?” The answer came to him while out walking with Dempsey.  “Tag Your Take Out. It just popped into my head. I thought it might be a good way to promote these restaurants who really need help.”

The way the campaign works is this: people going out for take-out food snap a photo or capture a video of their excursion and post it to Instagram, tagging Evander and Louise at @e.l.saratoga and using the hashtag #tagyourtakeout.

In addition to the photos making the rounds of social media and adding to a sense of community, Hopper’s E&L selects four winners every week from the posts. Each of the four receive a $50 gift card redeemable at one the group’s 17 restaurants. A $10 gratuity will also be provided to the restaurant, and for each $50 gift card given away, a $50 donation will be made to Franklin Community Center.

“We’re buying the gift cards. I didn’t want to ask the restaurants to give us gift cards because they’re already hurting enough, and we’re also including a $10 gratuity to the business because I think it’s important to remember that there are still people working. They might not be coming to your table like they usually do, but they are putting themselves at risk,” Hopper says.

“With each gift card we give away, we’re also giving a $50 donation to Franklin Community Center as well – because the whole concept from the beginning was: support our local restaurants and support families who are in need, because the families can have other basic needs,” he says. “We’ve got 22 giveaways funded, so currently that’s $1,100 in gift cards and $1,100 to Franklin Community Center.”

Franklin Community Center – which is located on Franklin Street – is a non-profit organization providing basic necessities and services to less fortunate individuals and families in Saratoga.

“Anybody can tag their take-out at any locally-owned restaurants, and we’re certainly encouraging people to have fun with it,” says Hopper, adding that the support of sponsors, such American Natural Gas, help make the gift-card drawing possible.  “It’s focused on Saratoga, but we’ve gotten some who have tagged in Ballston Spa, and we’ve gotten some from Albany. Post a photo of it, tag us and tag the restaurant and you can be entered in the drawing.”

Each week on Wednesday afternoon four winners are picked, and Hopper says he anticipates staging the drawings and gift card winners for at least the next couple of weeks.

“We want people to go and support local restaurants. The restaurants – obviously they’re all hurting and the feedback they’ve given me is they’re doing what they can to stay afloat and to keep their staff as much as is possible.”

For more information about the Evander and Louise #tagyourtakeout initiative, and a list of the Saratoga eateries where the winning gift cards are redeemable, go to: evanderandlouise.com/tag-your-takeout.

The Saratoga-Sponsor-A-Scholar program decided to do something a little different for its yearly feedback session, during which they find out what their senior students like and dislike about the program for the sake of future improvements.  Responding to a complaint that has been common from students over the years that they did not learn enough about handling certain social situations, Mary Gavin and Kristie Roohan organized an “etiquette dinner” that would help their students learn to be more comfortable in such situations, in addition to giving them an opportunity to give their feedback on the program.

Held at Sperry’s Restaurant in downtown Saratoga Springs, part of the goal of the dinner was to teach the students about restaurant etiquette, including using menus, how to order, which utensils to use, among a variety of other things.  Beyond all of that, the broader goal of the night was help the students learn to feel comfortable in social situations that might take place in environments similar to Sperry’s, whether they be meetings, interviews, parties, or any other similar sort of occasion.

“It was so much better than we could’ve expected,” Mary Gavin said of the dinner.  “They loved it.”

Students were encouraged to ask any questions they had about anything during the night, and they asked plenty, as many of them had never had experience with restaurants like Sperry’s before.  According to Gavin, questions ranged from wanting to know about certain menu items that they had never heard of, to asking if it was okay to ask to take their leftovers home.  To their credit, Gavin said that the wait staff at Sperry’s were courteous and grateful throughout the night, helping students with anything and everything they needed or wanted to know about.

The dinner also gave the program organizers their annual opportunity to solicit feedback about the program from the outgoing senior students.  According to Gavin, students expressed their satisfaction with the program as a whole, in particular with the mentors that they have been working with, while also expressing dissatisfaction with their mentors’ tendency to be gone certain days on official business, leaving them without guidance.  Gavin said that they will be taking that latter criticism into account moving forward.

Saratoga-Sponsor-A-Scholar is a ten-year-old not-for-profit program that works with “financially-disadvantaged” students in the Saratoga Springs school system by assigning them mentors who help them to finish high school and prepare for college.  Many of the students in the program end up being the first in their families to enter college, according to Gavin.

Ultimately, Gavin said that one thing stood out to her the most as a sign that the night had been a success.

“I think the highlight was we didn’t see a single cell phone the entire night,” Gavin said.

What do you think of SSAS's etiquette dinner idea?  Should more school program's teach practical social skills?  Let us know your thoughts in the comments.