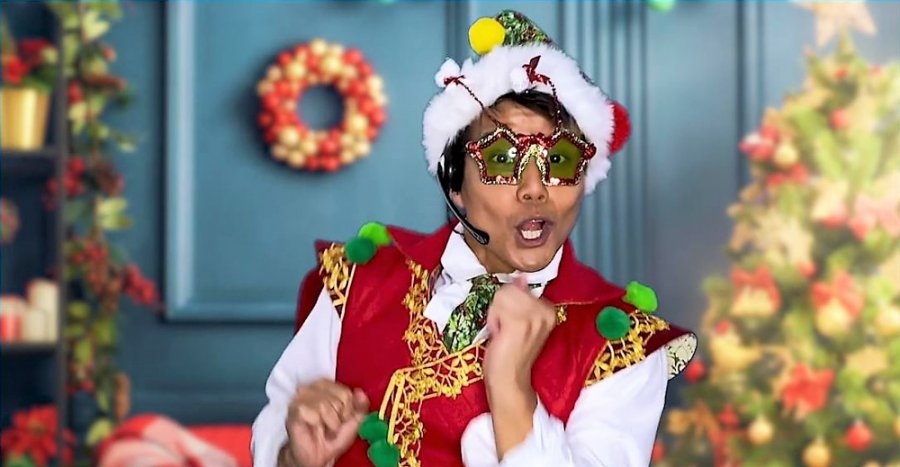 SARATOGA SPRINGS — This was the original plan: Santa and the elves, up on the big stage, in a theater filled with people. Then came the pandemic - What to do, What to do?

Santa’s head elf had an idea. It would take the convincing of the whole North Pole, but what if this year’s merriment would continue holiday tradition by adopting the modern tools of technology? All seems virtually fine with going virtual - until a conflict over the annual naughty and nice list threatens to eradicate the entire gift-sharing season. Can Santa save Christmas?

The story is told in a brand new 40-minute production called “The Nice List,” offered free during the month of December on YouTube, for family holiday enjoyment.

“After the pandemic happened, the story evolved to be about Santa and the elves having to work by Zoom or video conferences,” says Elliott Masie, who along with wife Cathy operate Masie Productions – a boutique company that creates or co-produce shows that combines theater, engagement, technology and learning. They have been involved in 29 shows that have been on Broadway. The Saratoga Springs couple are producers of the new family video musical.

“Alan Muraoka, who has played Alan on Sesame Street for I think 20 years, is the director. He came to Cathy and me, along with our friend Telly Leung, who has been Aladdin on Broadway, and said: Hey, we’ve got this great show and maybe we can film it on green screen for people at home,” Masie says. “After that, one thing led to another.  We found seven wonderful actors - filming themselves locally on their PC’s or their phone. The actors and musicians all worked virtually, and it was all put together. Two of our actors found the audio quality of their apartments were horrible, but their closets were excellent!”

Muraoka directed the production which was written by Phoebe Kreutz.  Gary Adler – who served as the music director/arranger for the Radio City Christmas Spectacular – was in charge of the music, and Michael Mindlin the choreography.

“Everybody just had a blast. We have James (James Monroe Iglehart AKA Santa) – who’s the Tony Award winning Genie in ‘Aladdin,’ Telly Leung and some of the people from (the Tony Award-winning musical) Avenue Q, and Sesame Street in there. Cathy and I are just delighted, it’s one of the most fun things we’ve done as producers,” Masie says.

“You know every day I probably get 12 invitations to see something where you pay online.  I said: Let’s not do that, let’s just give it away. It was something we did in eight weeks with about $65,000. We were able to pay actors and it’s out there for people around the world to watching it for free,” Masie says.

“The point that’s interesting to me is watching the elves and Santa learn how to work virtually. Right now people are navigating the world and working remotely, so in some ways it’s a story about this moment – video conferencing and the like,” Masie says. “We think this is the right story to do right now. And the world needs a little uplift. Our only objective is that a lot of people see it.”

To watch “The Nice List: an original holiday family musical,” and learn more about the cast, crew and people involved, go to: www.nicelistmusical.com.