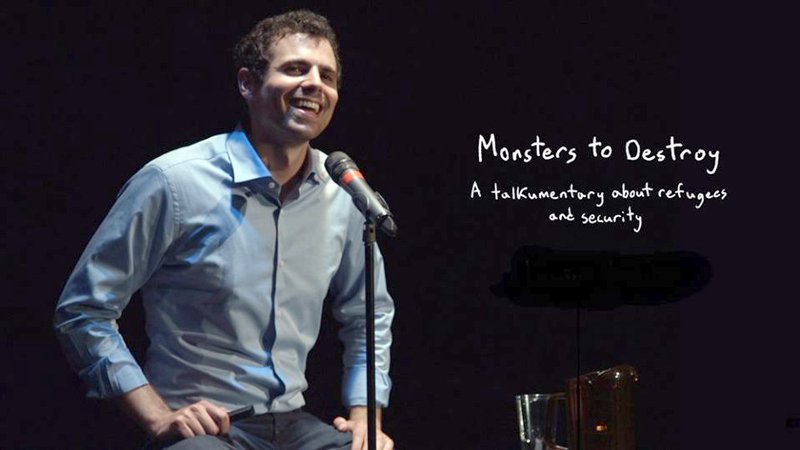 SARATOGA SPRINGS — The start of Saratoga Peace Week brings the screening of two multimedia presentations courtesy of the Saratoga Immigration Coalition, “Monsters to Destroy” and “1954” in the Davis Auditorium at Skidmore College on Friday, Sept. 20 and Saturday, Sept. 21. The events begin at 7 p.m. and are free to the public.

“Comedy is a tool, especially for issues that people are tired of hearing about,” said Ben Tumin, historian, comedian, and creator of the two presentations addressing America’s response to refugees.

Both programs are co-sponsored by the Saratoga Immigration Coalition and the John B. Moore Documentary Studies Collaborative (MDOCS) at Skidmore College.

As a comedic historian, Ben Tumin looks at current global migrant, refugee, and immigrant situations and presents them with a bit of satire and absurdity, while relating the current situations to historical underpinnings.  He has been researching and developing his new presentation, “1954” as a kick-off to Saratoga Peace Week.

Building on questions raised in “Monsters to Destroy,” “1954” examines the question: Are we living in a post-truth era?

Looking to history, Mr. Tumin explores coverage of the 1954 U.S.-led coup in Guatemala and its impact on migration today, most notably the current refugee, migrant crisis on the U.S. southern border.   Mixing historical information, current situations, and his comedic approach, Mr. Tumin will present an educational and fun event reminiscent of John Oliver, while continuing to unravel why Americans consistently overlook the facts about immigrants and refugees.  A great pre-start for Saratoga Peace Week!

The evening will be moderated by Terry Diggory with a public Q&A to follow.  There is no charge for admission.

“Monsters to Destroy” (M2D), follows on Saturday, Sept. 21, also in the Davis Auditorium, Skidmore College.  M2D is a humorous talkumentary based on the live multimedia talk that the advocate-historian-comedian toured around the U.S. in 2018.

Tumin concludes that the answer unequivocally is no!  Ben examines the real security impact of refugees, while connecting the findings to his own family history.

The film weaves the testimony of five Syrian refugees living in Berlin together with Ben’s personal investigation into his family’s German-Jewish history, highlighting the tension between the American ideal of freedom and the fact that, historically, Americans have been resistant to resettling refugees—proof that the animus we see in the U.S. toward refugees today is nothing new.

Ben flips the narrative that refugees are weak and threatening on its head, ultimately arguing that welcoming refugees strengthens not only the economy and American values but also national security.

Brazenly funny, deeply personal, and driven by Ben’s curiosity, the film pushes audiences to consider their own family histories and see the displaced through a lighter, more empathetic  lens.

“There’s an ecosystem of people who work in refugee advocacy,” Tumin said. “The question for me is how can I fit myself in.”

Retired US Marine Lt. Col. Scott Cooper, a candidate for Congress in North Carolina calls the film “hilarious, informative, and evenhanded. An unexpectedly brilliant cross between John Oliver and a Ted Talk.” monsterstodestroy.com.

The Saturday program will open with “Min Wein?” (Where are you from?), a short audio documentary by Skidmore Student Hadia Bakkar exploring the complexities of her Syrian identity in the current political climate.

This personal piece follows Bakkar’s experiences as a student from her hometown, Damascus, Syria, to high school in “Middle of Nowhere,” New Mexico, and eventually to Skidmore College in Saratoga Springs.

“Min Wein” is part of a larger work in progress, “Ta’teer” (Destitution), in which Bakkar searches for clarity about her own journey by examining the lives of Syrian immigrants and newly-settled refugees in the Capital District as they all try to build new lives for themselves in a foreign land.

Born, raised, and based in New York, he worked at Amnesty International in Morocco and at the community building platform Meetup before forging an independent career in political comedy and filmmaking. His work has been featured in the Daily Beast, Al-Jazeera, and “The Brian Lehrer Show” (WNYC).

He has toured “Monsters to Destroy” in partnership with Human Rights First, Vets for American Ideals, and others.

The title Monsters to Destroy comes from an 1821 John Quincy Adams speech often quoted by isolationists. In the speech President Adams declared that America “goes not abroad in search of monsters to destroy.”

“I’m using it to kind of flip it on its head with the implication being that the more we label the wrong people monsters, the more we become monsters ourselves,” Tumin said.

Ben worked with several national and local organizations in researching the Monsters to Destroy project and  even more when touring the talk. He produced the film independently, funded it through earnings from his tour, edited it himself, and worked with a few professional groups in L.A. for post-production.

As a comedic historian, Ben looks at current global migrant, refugee, and immigrant situations and presents them with a bit of satire and absurdity, while relating the current situations to historical underpinnings.  He has been researching and developing his new presentation, “1954,” for the past year.

For more information go to Saratoga Immigration Coalition Facebook event page; email:  This email address is being protected from spambots. You need JavaScript enabled to view it.; or call: 518-306-1313.

More in this category: « Farm to School An Intrepid Education »
back to top