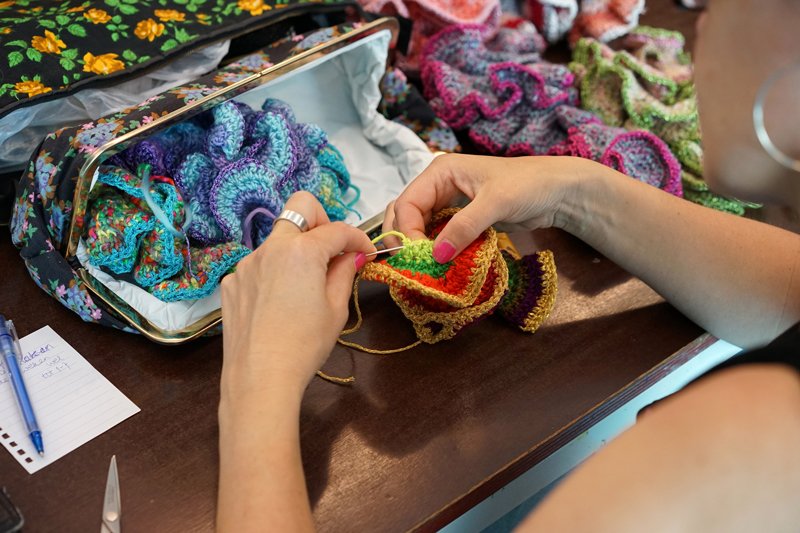 Crochet Coral Reef workshop at the Van AbbeMuseum, Eindhoven, the Netherlands. Photo courtesy VAM and the Institute for Figuring.

SARATOGA SPRINGS —The Frances Young Tang Teaching Museum and Art Gallery at Skidmore College invites the public to contribute to the Saratoga Springs Satellite Reef, a community-created coral reef composed of hundreds of crocheted specimens that will go on view as part of the exhibition Radical Fiber: Threads Connecting Art and Science, which is slated to go on view starting January 29, 2022.

For the Saratoga Springs Satellite Reef, anyone can participate by crocheting structures with coral-like ruffles, which represent hyperbolic geometry, an area of mathematics. The Satellite Reef is part of the worldwide Crochet Coral Reef project by Christine and Margaret Wertheim and the Institute for Figuring. The project draws on the long historical connections, especially in the United States, between fiber practice and community building.

Monthly crochet workshops will also be held on February 9, March 16, April 13, and May 4, starting at 7 p.m. To connect, chat, and learn more about the project with Radical Fiber curator Rebecca McNamara, 30-minute sessions will be held on Wednesdays at Noon from February 10 through May 11.

Registration for the workshops, to be conducted via Zoom, are available on the Tang website at tang.skidmore.edu.

More in this category: « Students and Schools Agree Support Is Needed! Agricultural Scholarships Available for Seniors »
back to top