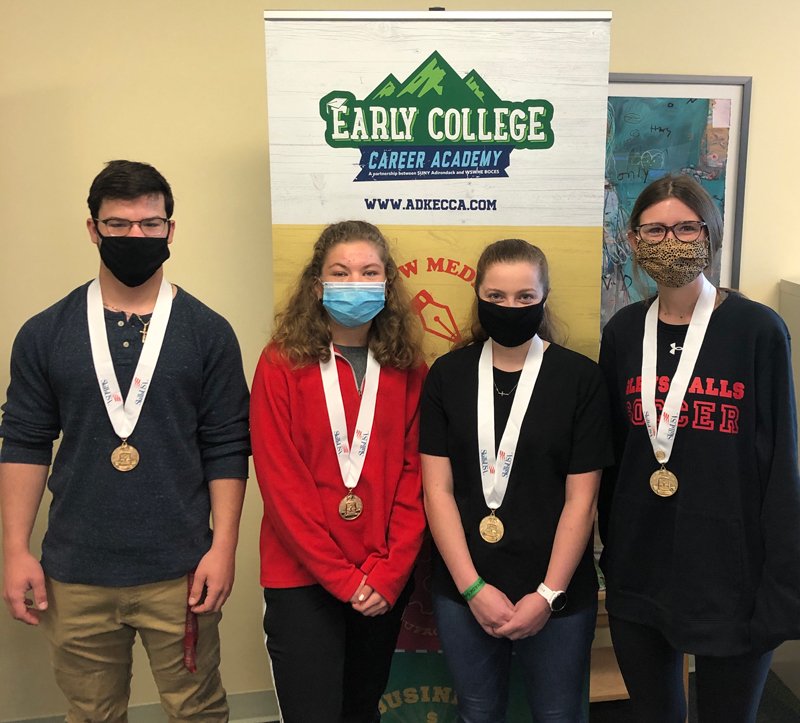 The Washington-Saratoga-Warren-Hamilton-Essex BOCES Career and Technical Education (CTE) division, which includes the Early College Career Academy (ECCA), participated in the SkillsUSA State Leadership and Skills Championships from April 12 to April 22. The championships were conducted virtually, with some competitions being recorded and some being livestreamed with judges from across New York State. There were 600 students from New York State who competed, and nine local students were declared champions in their respective fields.

Brendan Lee, a senior from Salem in the Construction Trades program, won first place in Carpentry. The contest required him to frame walls using wood studs; cut and install common, hip, and jack rafters; stair stringer and install drywall, siding, sheathing, baseboard molding, and window trim. He was assessed on accuracy, workmanship, the ability to read and interpret blueprints, and the proper use of tools and equipment.

Brandon Coulter, a junior from Queensbury in the ECCA IT Essentials Program, won first place in Job Interview. The Job Interview contest was evaluated in three parts: resume, completion of an employment application, and an interview with industry professionals.

Tyler Brooks, a junior from Whitehall in the ECCA IT Essentials Program, won first place in Job Skill Demonstration Open (team of two); his teammate, Mathew Richard, is a junior from Lake George. The contest assesses each contestant’s ability to demonstrate and explain an entry level technical skill used either in the occupational area for which he or she is training or outside the training area.

Patrick Fayette, a senior from Queensbury in the Culinary Arts Program, won first place in Restaurant Service. The Restaurant Service competition focuses on guest service/relations in the dining room and “front of the house” skills of guest hospitality and food and beverage services.

A team of four seniors from the ECCA Business Program – Justin Garfolo (Saratoga Springs), Elizabeth Radyn (Lake George), Aeryn Brewer (Corinth), and Ella Crossman (Glens Falls) – won first place in Entrepreneurship. The team was evaluated on their success to formulate a business plan, present a business presentation, and respond to changes that may occur during operation. They submitted a resume, business plan, and did an oral presentation.

In addition, twenty local students earned second and third place at the state competition. In terms of medals won at the State Championships, WSWHE BOCES is one of the top New York schools.