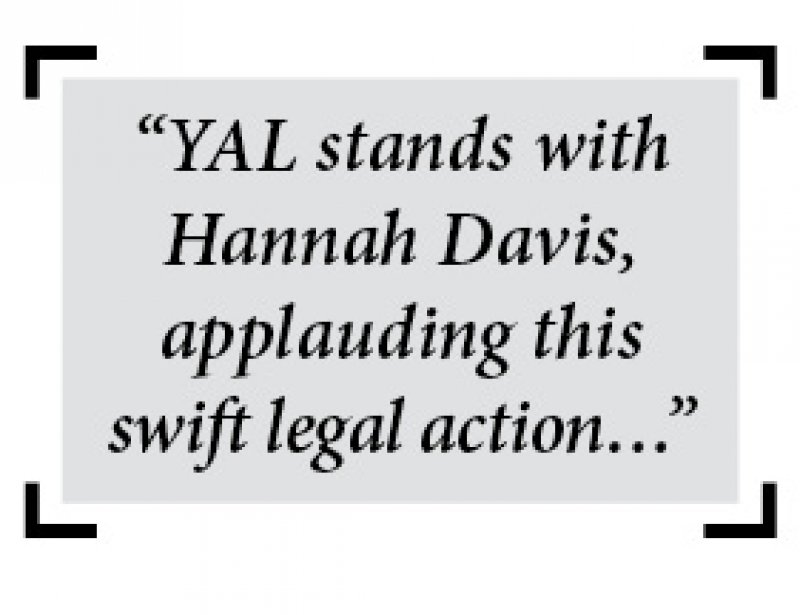 SARATOGA SPRINGS — YAL backs ADF’s decision to take legal action against Skidmore College after denying student Hannah Davis to form a chapter of the organization on campus earlier this spring.

The Alliance Defending Freedom (ADF) sent a demand letter to Skidmore College last Friday (May 7), threatening litigation against the college if they do not immediately recognize Davis’s Young Americans for Liberty (YAL) chapter to assemble.

ADF’s Center for Academic Freedom is a legal team dedicated to protecting students’ freedoms of speech and association. YAL is the nation’s most active libertarian youth organization, with nearly 5,200 members at more than 400 colleges and universities across the country. In response to ADF taking legal action, YAL is officially speaking out in support of Davis and ADF.

“It’s a shame that Skidmore College has chosen to sacrifice the values of truth, civil discourse, and real tolerance in the name of social justice,” YAL’s Chief of Staff, Sean Themea, said in a statement. “YAL stands with Hannah Davis, applauding this swift legal action from Alliance Defending Freedom to uphold her right to speak freely.”

“We represent Hannah Davis and Young Americans for Liberty, a student organization that seeks official recognition from your College…Your College promises every student robust freedom of speech and freedom to associate and form organizations on campus. But you have denied Ms. Davis the ability to form a YAL chapter because the student government labels YAL as a hate group. This is false and is quintessential viewpoint discrimination that violates Skidmore’s promises to its students. We urge you to rectify this decision immediately to avoid unnecessary litigation.”

The letter continues on, addressing how the college’s policies and promises to protect students’ First Amendment rights, as listed in the college’s Student Bill of Rights and the SGA Constitution have been violated.  The letter also details the hostility that Davis has experienced from fellow peers. ADF states that by refusing to allow the chapter, the college is “engaging in deceptive trade practices and false advertising under the New York Consumer Protection Act.”

Saratoga TODAY reached out to Skidmore College for a comment. The college responded that, at this time, they do not have anything to share regarding the letter.

ADF has given the college a deadline of May 21, 2021 to allow Davis to form her student chapter before legal action is taken.

Read 1453 times
More in this category: « Saratoga Independent School Announces Appointment of Next Head of School From the Publisher's Desk... Inequity Training: Coming to a Community Near YOU… »
back to top