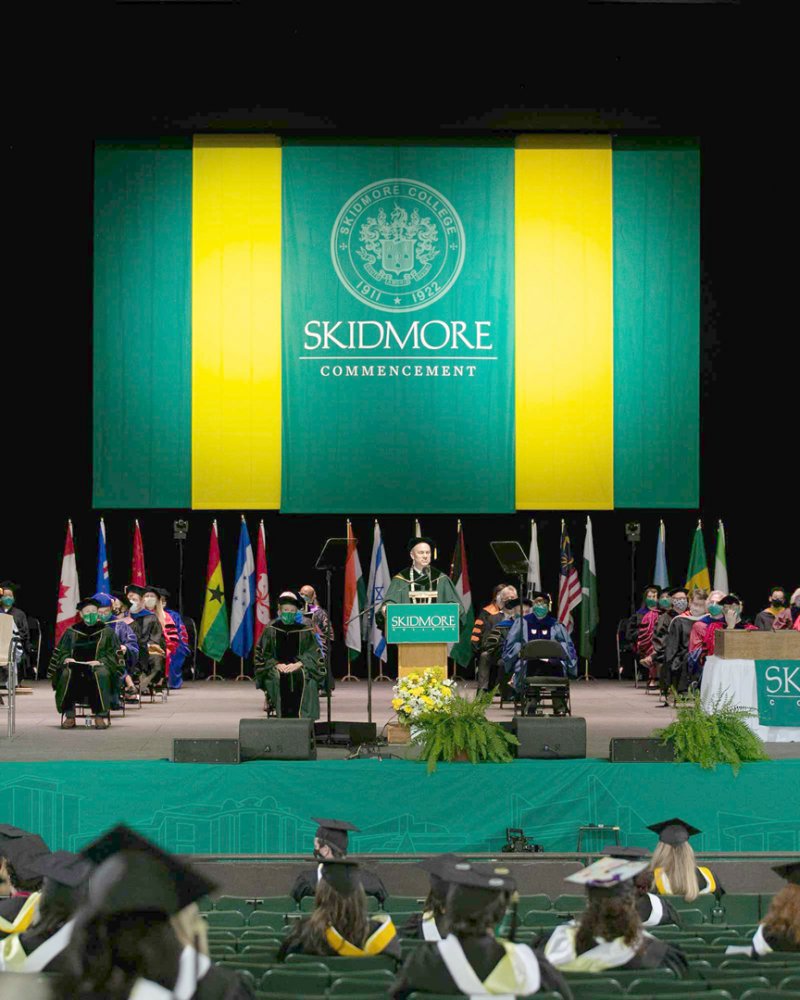 SARATOGA SPRINGS — Skidmore College conferred 570 degrees to the Class of 2021 during in-person Commencement Exercises that celebrated the senior class’s resilience.

The ceremony – celebrated at Saratoga Performing Arts Center on Saturday, May 22- brought with it the assurance of a traditional academic ceremony, but also reflected the challenges of the times.

Wearing caps, gowns, cords, and stoles, most of the 371 graduates to receive Bachelor of Arts degress and 199 recipients of Bachelor of Science degrees attended to receive their diplomas in person. At the same time, in line with the careful measures that allowed Skidmore to offer in-person learning throughout the 2020-21 academic year, graduates wore specially designed masks and remained socially distanced throughout the celebration.

Family and friends of the graduates were able to view the ceremony via a livestream on the Skidmore homepage, and some opted to attend an in-person viewing party held at Saratoga Springs City Center or a Zoom watch party that appeared on the large screens at SPAC, to replicate the presence of loved ones for the graduates.

Cornel West, one of America’s leading public intellectuals, and Janet Guthrie, the first woman ever to compete in the Indianapolis 500 and the Daytona 500, received their honorary degrees from Skidmore virtually.

This year’s Skidmore Commencement was the first led by President Marc Conner, who has successfully steered the College through the pandemic during his first year in office.

The event featured many elements of a traditional Skidmore Commencement, such as a processional accompanied by bagpipers from the Schenectady Pipe Band, and a moving rendition of Skidmore’s alma mater performed by seniors Jonathon J. Goff, Thabi Khumalo, Atticus Rego, and Destiny Donelson.

The ceremony also included a special video tribute and an in-memoriam degree for senior Samantha Sasenarine, an English major, Educational Studies minor, and a strong advocate for inclusivity and diversity who died on Feb. 5. A tree was also planted in her memory during Senior Week.

More in this category: « Community Care Pop-Ups Successful in March and April SSCSD Music Department Raises Over $8,000 for Community Organizations »
back to top