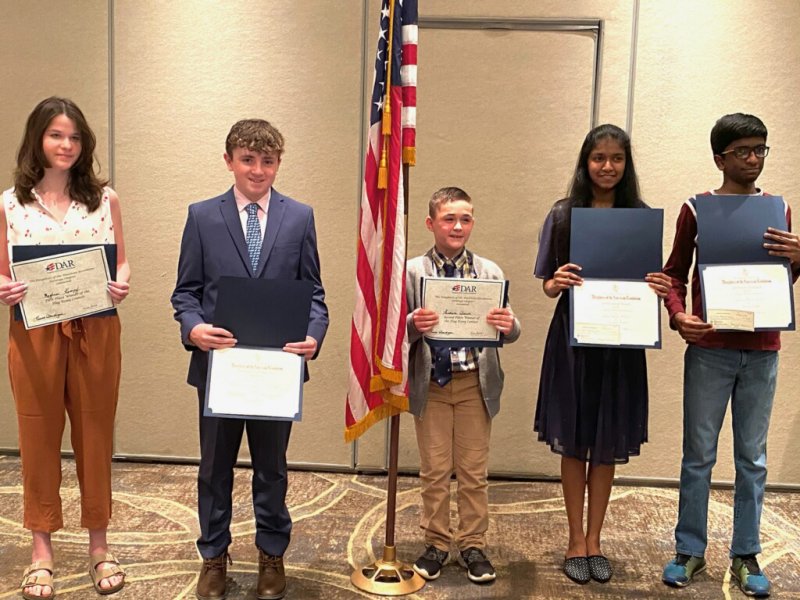 The Flag Essay Contest theme was “What the Flag of the United Stated of America Means to Me” and was eligible for any student in the fifth and sixth grade and attending public, private, parochial schools or those who are home schooled to enter. This year the chapter had over 60 essays entered. The winner was Meghan Kempf, second place went to Hudson Bauer, and third place went to Gabriela Schwartz.

The American History Essay Contest theme was “The Boston Massacre” and was eligible for any student in fifth, sixth, seventh, and eighth grade in public, private, parochial schools or those who are home schooled to enter. The winner was Conor Reilly.

The Junior American Citizens (JAC) is a community service project. The JAC contest is open to all pre-school through 12th grade students in public, private, and parochial schools, and in sanctioned home study programs in the categories: gifted, general, and special needs. The winners collected food for people needing assistance. Each received a check, a Junior American Citizen Certificate, and a small goody bag. Co-winners were Sakthi and Surya Muthukrishnan. The co-winners read a short note to the members, thanking them for awarding them first place.

“We are honored to recognize these talented students with their creative writing skills and doing community service,” said Chapter Regent Martha Chromik.

The National Society of Daughters of the American Revolution, founded in 1890, is a women’s service organization whose members can trace their lineage to an individual who contributed to securing American independence during the Revolutionary War. Today’s DAR has over 185,000 members in 3,000 chapters in the United States and abroad. DAR members annually provide millions of hours of volunteer service to their local communities across the country and world. DAR chapters participate in projects to promote historic preservation, education, and patriotism.

If you are interested in learning more about DAR membership, contact This email address is being protected from spambots. You need JavaScript enabled to view it..