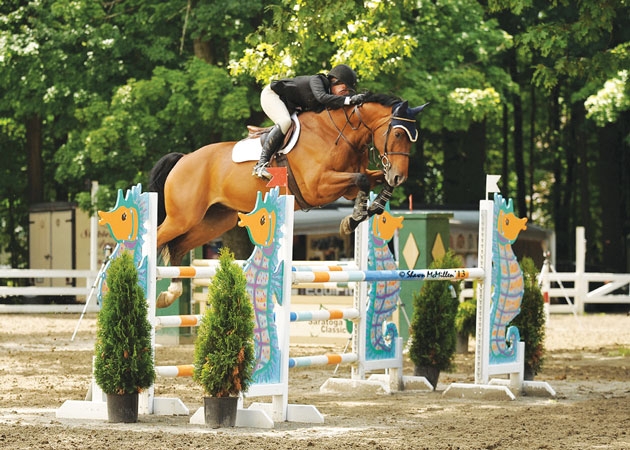 SARATOGA SPRINGS — The Skidmore College Saratoga Classic has never had to cancel a full day’s worth of competition until this year. But the bad weather hasn’t held the horse show from rescheduling and continuing to raise financial aid for Skidmore College students as the college’s single largest fundraiser.

Financial aid is the second largest component of the Skidmore College’s operating budget. Nearly 42 percent of the Class of 2016 is receiving Skidmore aid and a lot of that comes from the two week event just off Union Avenue.

Every dime from the horse show goes to the Skidmore scholarship budget.

With all the proceeds directly funding scholarship awards for Skidmore students who may not have been able to attend the school otherwise, the show has gained attention from people who are not even from the area or even competing at the horse show.

“That says to me we’re doing something right,” Einhorn said. “People believe in this and they want to support it.”

The average Skidmore grant portion of each package in this academic year averages to $31,900. The Institute of Education Sciences reported the national average grant size for undergraduate financial at a bit lower—$9,100.

“In actuality, we’re not able to compete like some of the other colleges,” Einhorn said. “For the students that we admit, we meet those financial needs. We just don’t have the endowment compared to the schools that have been around for 100 years. But we’re working on it.”

Of the $36 million the college has raised for financial aid, SCHS alone has contributed approximately 10 percent at $3 million. That $3 million has been raised over the last 10 years.

“As an exhibitor, it means a lot knowing that 100 percent of it goes to scholarships and it helps kids get a great education,” exhibitor Ali Sirota said. “It’s a huge difference than going to a lot of the other horse shows throughout the year where you’re just showing. I was raised by parents who always put education first. It’s so nice to know that Skidmore can give so many kids and opportunity where they can just go and focus on education and not have to worry about [money]. Their biggest goal is to get good grades and come out and be productive members of society. It’s a nice feeling to know that.”

This year’s 16th annual show was scheduled to start Tuesday, June 11, but had to start June 12 because of the inclement weather.

“At the end of the day, when it rains and we stop the horse show, or people don’t compete and we lose the revenue, it’s still all good because you are building relationships with people and they’re seeing what you’re trying to do and that you’re trying to help people,” Einhorn said.

Building those relationships and showing people that Skidmore has a lot to offer, including a seven-time Intercollegiate Horse Show Association national champion riding team, is just another aspect of the aura surrounding the event.

It can’t be forgotten that it’s a time of high-grade competition with riders and horses from all over the east coast showing up for a chance at some big money.

This year’s showing has nearly 1,000 horses entered and features a $25,000 Landgero Cup Grand Prix, a $15,000 Gochman Family USHJA Hunter Derby and $12,000 Take2 Thoroughbred Hunter/Jumper Divisions. New jumper classes and divisions are also represented, as men and women are pitted against each other and range from kids to people in their 60s competing in hunter and jumper rings.

“It’s a staple on many yearly schedules,” Sirota said. “A big part of that is because Adele and her team do such a lovely job running the horseshow and really listening to exhibitors and trainers, figuring out what they want and how to make the show better every year. And I think that’s a big part of the success and the long run of the amount of money they raise for the school.”

In what is now a two week event, the first week will continue through Father’s Day, June 16. The second week is scheduled to go from June 19–23. Admission is free.