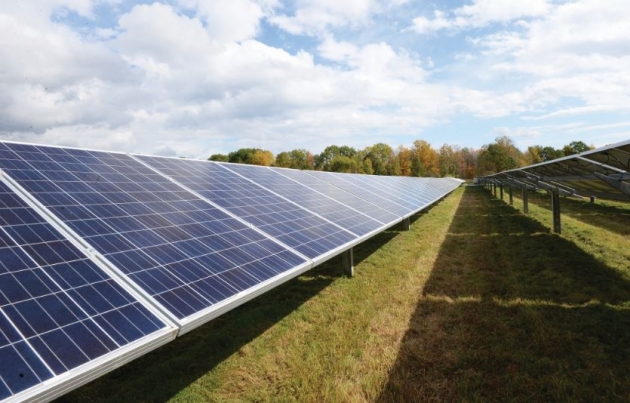 The system is comprised of 6,950 modules with panels post mounted less than six feet off the ground. The eight-acre solar field will provide 12 percent of Skidmore’s annual electrical usage from clean, renewable power. It is among the largest solar arrays in New York State, according to Skidmore.

Skidmore College President, Philip A. Glotzbach, says this project is an element of the college’s ongoing investment in sustainable energy.

“There’s a broad range of such initiatives -- geothermal cooling on campus, solar power and hydropower; all of which the college is pursuing,” said Glotzbach. “One of the themes of our mission statement is to educate the students to be informed, responsible citizens. Through our own commitment to sustainability, the college is modeling such responsible behavior and is in itself operating as a responsible citizen of Saratoga Springs.”

The solar electric project is part of Governor Andrew M. Cuomo’s NY-Sun Initiative to offer state assistance for solar ventures, which is dramatically increasing solar energy and moving the solar industry in New York State toward sustainability and self-sufficiency.

In 2013, Skidmore was awarded a $2.35 million grant from the New York State Energy Research and Development Authority (NYSERDA) and worked with a developer, Dynamic Solar, to get the solar farm up and running.

“It’s been more than a decade since NYSERDA first started supporting solar energy,” said Joseph. “Since then, we have come a long, long way. In fact, last month Governor Cuomo announced we will partner with solar developers across New York State to install over 200 megawatts of solar power. That’s nearly 70 percent more than what was installed a year ago.”

Joseph said today’s young adults are coming of age in an era with a heightened environmental awareness; one where extreme climate events are incurring with greater frequency. That observation poses true for Skidmore senior Margaret Pfeffer, who says this solar project is a step in the right direction toward an environmentally sustainable future for energy.

“I know that many of us [students] dream of a more sustainable Skidmore and this project is not just a step, but a leap towards fulfilling that dream,” said Pfeffer. “Climate change is such a complex problem and there’s no single solution that will erase the damage we as humans have done. That’s why all of our efforts at Skidmore are so important.”