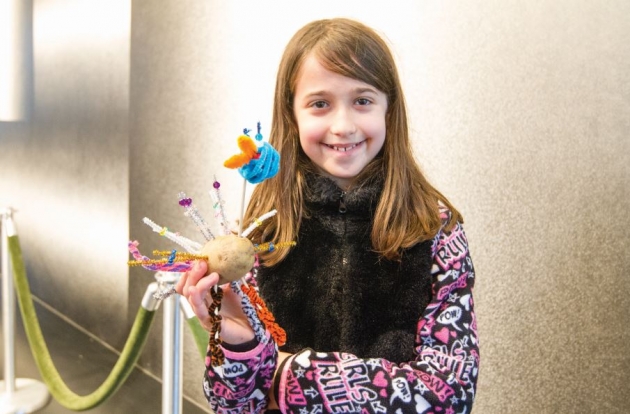 The event, part of the museum’s Family Saturday programs, has become a staple event for many. What started out as an art-making project more than a decade ago has turned into a Thanksgiving tradition not to be missed.

“This is my favorite thing we do all year long,” said Ginger Ertz, museum educator for K-12 and community programs.

Ertz is the founder of the beloved Make-a-Turkey-Out-of-a-Potato Extravaganza and started the event in 2002. Participants are given a russet potato and a collection of colorful feathers, pipe cleaners, beads, frill picks and potato sticks, and are tasked with creating turkey to display as a centerpiece during Thanksgiving.

“When I was little, we always made a turkey out of a potato but we cut the feathers and wings and everything out of cardboard and sort of shoved them into the potato,” said Ertz. “So when I started this job and became in charge of Family Saturdays I thought, ‘Well, let’s up that.’ Also, I’m a pipe cleaner artist.”

11-year-old Ellie Sweeney Benzon and her brother, 5-year-old Jack, were hard at work, creating colorful turkeys to place at the center of their table on Thanksgiving.

“I like it a lot,” said Ellie. “I like the peacock colors and I’m using a lot of twirly pipe cleaners.”

Meanwhile, Jack was decorating his turkey using his favorite colors – blue and green.

“It’s a fancy turkey,” said Zoe Shapiro, 8. “I used pipe cleaners and beads…I’m going to put it on the table for Thanksgiving!”

“I love it,” said Ertz. “I wish I could go to all of their houses and see their tables!”

The Make-a-Turkey-Out-of-a-Potato Extravaganza is held every Saturday right before Thanksgiving.