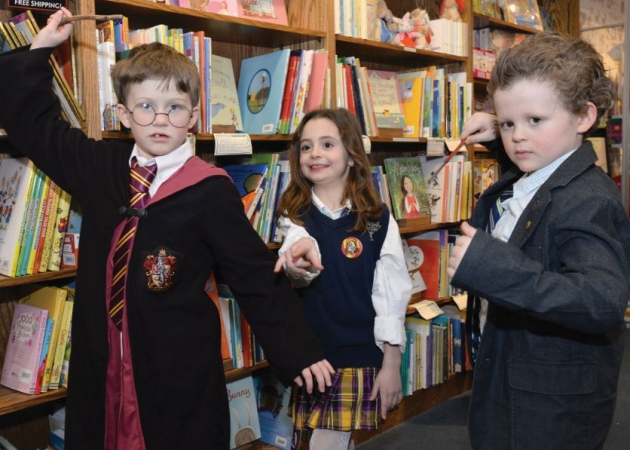 The global book night was intended to give new and existing fans a chance to share the Harry Potter stories and to introduce the next generation of readers to the magic of Hogwarts. The Northshire team transformed the bookstore into Hogwarts School of Witchcraft and Wizardry, setting the mood for the dozens of Harry Potter fans who attended, for a magical night of activities and events.

Bookseller Amelia Stymacks, who dressed up as Bellatrix Lestrange for the event, helped organize Northshire’s Harry Potter Book Night. She says she grew up reading and loving the Harry Potter series.

“I’m a Harry Potter fan,” said Amelia Stymacks, bookseller. “I have vivid memories of doing Harry Potter weeks at my local library and we used to do a lot of things like this, so it’s fun to be taking charge and organizing it now.”

Fans of the film and book franchise enjoyed participating in a scavenger hunt to find horcruxes and hallows, designing wands, trivia, eating some Harry Potter-themed treats, and fortune telling from one of the professors from the magical school.

Many opted to come as Harry Potter himself, complete with drawn-on lightning bolt scars, glasses and wands, like 8-year-old Charlie, a local fan.

“Somehow, I’m in Ravenclaw,” said Charlie after being sorted into one of the four houses at Hogwarts; Harry Potter was famously in Gryffindor. “I like Ron the most…I like the humor.”

“My favorite is Hermione because she knows all of the spells and she has the time turner,” said Avery.

“Harry went down in the Chamber of Secrets and it was so cool how he just pulled the sword out of his pocket,” said Roman.

“It was Dumbledore!” added Logan. “He was the one in the mirror!”

For Rachel Person, Northshire’s events and community outreach coordinator, organizing an event where readers can experience a book coming to life is rewarding and having that event be so well-received by the community is even better.

“Getting kids excited and engaged about books and seeing it not as this thing that is an assignment is essential,” said Person. “Maybe I’m a little biased, but things like this that show kids reading is exciting, reading is cool, reading is a party…I feel so happy to bring events like this into town because it can turn people into lifelong readers.”

Indicative of the great turnout, Charlie, Logan, Roman and Avery are examples of how the Harry Potter series continues to transcend generations and remain a popular book choice after all this time.

“For me, it’s always been the friendships and loyalty between the characters,” said Stymack. “…and it’s surprisingly relatable for such a difference universe. You have all of the school drama and the bullies, but then you get the added evil of Voldemort and the joys of the magic in Quidditch.”

"The whimsy, I think, really helps...that there's so much charm to them," added Person. "For some kids, the books can be quite dark and yet the joy and whimsy in the writing and the magic makes it work."

More in this category: « Kids in the Kitchen Local Teams Prepare for Regional Science Bowl »
back to top