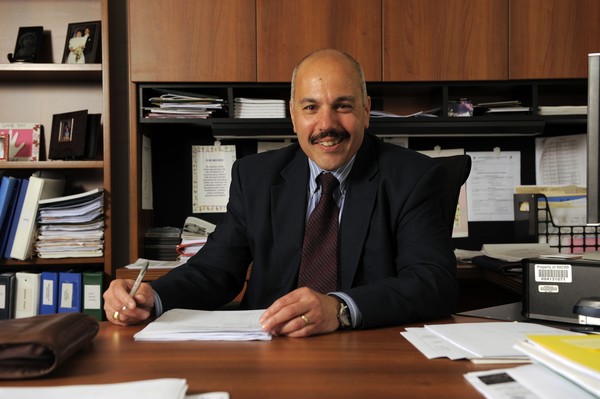 SARATOGA SPRINGS - “There is nothing like the first day of school,” Superintendent Michael Piccirillo exclaimed.

Between working in public education for the last 31 years and attending his own many first days of school, he has experienced a lot of that excitement first hand. Piccirillo attended Binghamton University and received his bachelor of arts degree in sociology, his master of arts in teaching from Binghamton with a certification in social studies for grades 7 through 12, where he went on to earn a doctorate in educational administration from Sage College. After teaching social studies for 10 years in two different school districts, North Warren and Lake George, his own high school alma mater, Piccirillo has been in the Superintendent’s office for the last 10 years, the first five as assistant superintendent and the last five as superintendent.

“It has been a really interesting and exciting 31 years.”

This year on January 1 Piccirillo put in his retirement resignation and the district will announce his replacement in the coming months with his final day being December 31.

“I’m not finished with being a public educator, I’m just looking to do something different and to have a little bit more time with my family,” he said.

For the upcoming school year, Saratoga will see many new projects that will help students succeed. When Piccirillo first began as superintendent, their Legacy Plan was the 2018 Vision, which is now almost to a close. They are now working on their new Legacy Plan and developing their next 5 – 10 year vision. The Great Outdoors Project was just presented to the town board. It is a $15.6 million project that will address the long overdue needs across the districts in properties they own, such as the East and West Side Recreation buildings and the back of Gavin Park that is owned by Dorothy Nolan Elementary School. They will be fixing and building more playgrounds and athletic fields.

Watson for Education is an IBM created augmented intelligence system that Saratoga will be the first district in New York State to utilize.  They will be a “Lighthouse District” for other districts around the state to come and learn from. This program creates personalized education plans for every individual student. It helps to make sure that students are successful not only academically, but socially and emotionally.

“Watson is an exciting and robust system that will ultimately help us to personalize education for all of our students and that has been one of our goals for our current 2018 legacy vision, but having the right tools to make it happen has been the difficult part of it. We believe Watson is going to be the tool we’ve been looking for,” he explained.

Expect a broader digital learning experience this year. CloudBooks, which is a Dell created tablet, will be available for all sixth graders to use and take with them as they move throughout the system. Each year, another grade level will be added, they hope to accelerate additions if more funding becomes available. They are using the Smart Schools Bond Act (SSBA) funds to purchase the new equipment.

The SSBA is “an initiative that would finance educational technology and infrastructure, providing students access to the latest technology and connectivity needed to succeed and compete in the global economy,” according to the website.

Since Piccirillo became Superintendent, graduation retention rate is at an all-time high. The goal for the last 10 years has been 95% and they have reached 94%.

“There is still room for improvement in terms of vision, obviously the target rate is 100%,” he clarified.

Piccirillo believes the retention rate has elevated due to more effort being put into support systems. They have partnered with Franklin Community Center and the LIFT Program to add more social workers to the staff, a mental health clinic, a substance abuse counselor at the middle and high school level. Graduation rates for subgroups have also improved. For special education and economic disadvantage rates have skyrocketed, almost doubling in both areas. Ten years ago, economically disadvantaged students were at a 35% graduation rate and special education was at 40%. Now, they are up to 80% and 75% respectively.

“As life gets more complex, students have greater needs and we need to be able to support them so they can focus on their academics and be successful academically. So yes there’s room for improvement but I also think we’ve made quite a bit of improvement over the last five years,” he noted.

There has been talk recently about the overcrowding in the elementary schools due to new housing developments being built. The district has six kindergarten through fifth grade schools, and of the most concern is with Dorothy Nolan Elementary School behind Gavin Park.

Speaking on the subject, Piccirillo said, “Dorothy Nolan School alone has room for 1200 kids and presently is only up to 800. To my knowledge, there is no concern for overcrowding at the moment. If that concern does become valid, we have the room to grow.”

Dorothy Nolan Elementary owns the land behind Gavin Park and they can expand the building if necessary. If worse comes to worse, they can also re-district and place children in the South Glens Falls schools.

“In the past when this issue arose, we have moved Dorothy Nolan students to Caroline Street School as opposed to having them change districts,” Town Supervisor Art Johnson said.

“If overcrowding does become an issue, Superintendent Piccirillo will certainly address it,” Johnson remarked.

When I asked Piccirillo what his favorite part of the school day was he said, “Students! Whenever I have a chance to be with students, to talk with them, to visit classrooms and participate in activities with them, that’s the best part of the day because that’s why I got into public education as a teacher. It’s always the hardest part of being an administrator is that the further up the ladder you climb in administration, the further away you get from the students.”

It goes to show that Superintendent Piccirillo has made great strides during his five years in the position and that the new Superintendent will have some big shoes to fill.