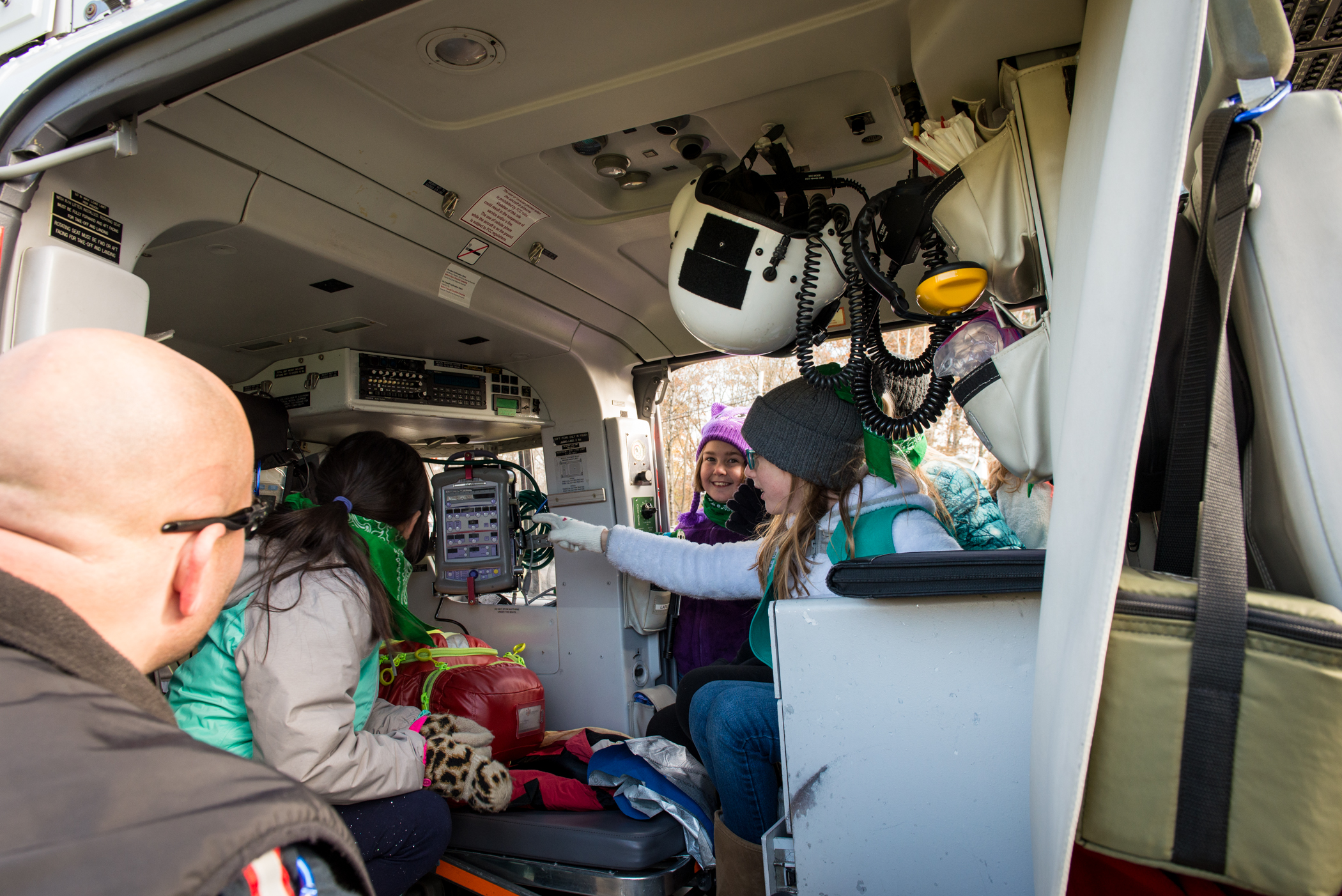 SCHUYLERVILLE — From noon to 2 p.m. on Sunday, Nov. 12 four troops in the Girl Scouts of Northeastern New York (GSNENY) chapter worked on achieving their First Aid badge or pin by learning about 911, the basics of first aid, such as using household items in a first aid situation and identifying cardiac and stroke symptoms, and meeting with local fire and EMS personnel from the General Schuylerville Emergency Squad and the Saratoga Hose Company,  along with LifeNet paramedics. Coordinator Kim Austin has been Troop #3085 Leader for three years and was given this idea by other troop leader Lana Cawrse.

“We were lucky because one of the other troop leaders, Lana Cawrse, has a brother-in-law who is a paramedic for LifeNet, Andrew Cawrse. They had basically initiated this over a family dinner and when we talked about it and decided to open it up to all of the Schuylerville troops, a lot of that fell into my hands. LifeNet generously donated their helicopter and Hudson Crossing donated the location,” Austin explained.

Along with a helicopter for the girls to explore and learn about, two fire engines were present and the girls got a thorough tour of the compartments in both engines and a lesson on evacuating from a home in the event of a fire with their families and pets.

“I think the most exciting part of the day was being able to explore the helicopter and try on the gear and participate in a mock rescue. They also learned from the paramedics, Andrew and his partner Brian, about splinting broken limbs with household items like bags of peas and chopsticks. They also learned stroke awareness, identifying the signs of a stroke,” Austin said.

Though it was only 40 degrees that day, Austin said they were lucky that it was a “warm 40 degrees,” so the girls and their leaders could comfortably learn what was being offered to them.

“Every year the GSNENY allows them to earn another 1st aid badge or pin so they continue to increase their skills through the curriculum and they build confidence by seeing people participate in these things. The best thing is they were interacting with real personnel who do these things every day and who they might encounter in these situations. It may make them want to be involved in this type of occupation in the future,” Austin said.

The girls’ parents were excited about what was being offered to their daughters. “From the parents I talked to, they were very excited the girls were having such a rich experience and got to have 20 minutes with each station. They were excited to see the girls learn that much at such a young age,” Austin explained.

“It’s great when we can bring all the troops together for a really great learning experience that is memorable for the girls and continue to build community support for Girl Scouts. We’re not just about cookies and crafts. Our goal is to build the next generation of leaders, which I feel is certainly true in this situation,” Austin vocalized.

More in this category: « Skidmore Cares Girl Scouts Troop #3087 Builds a Buddy Bench »
back to top