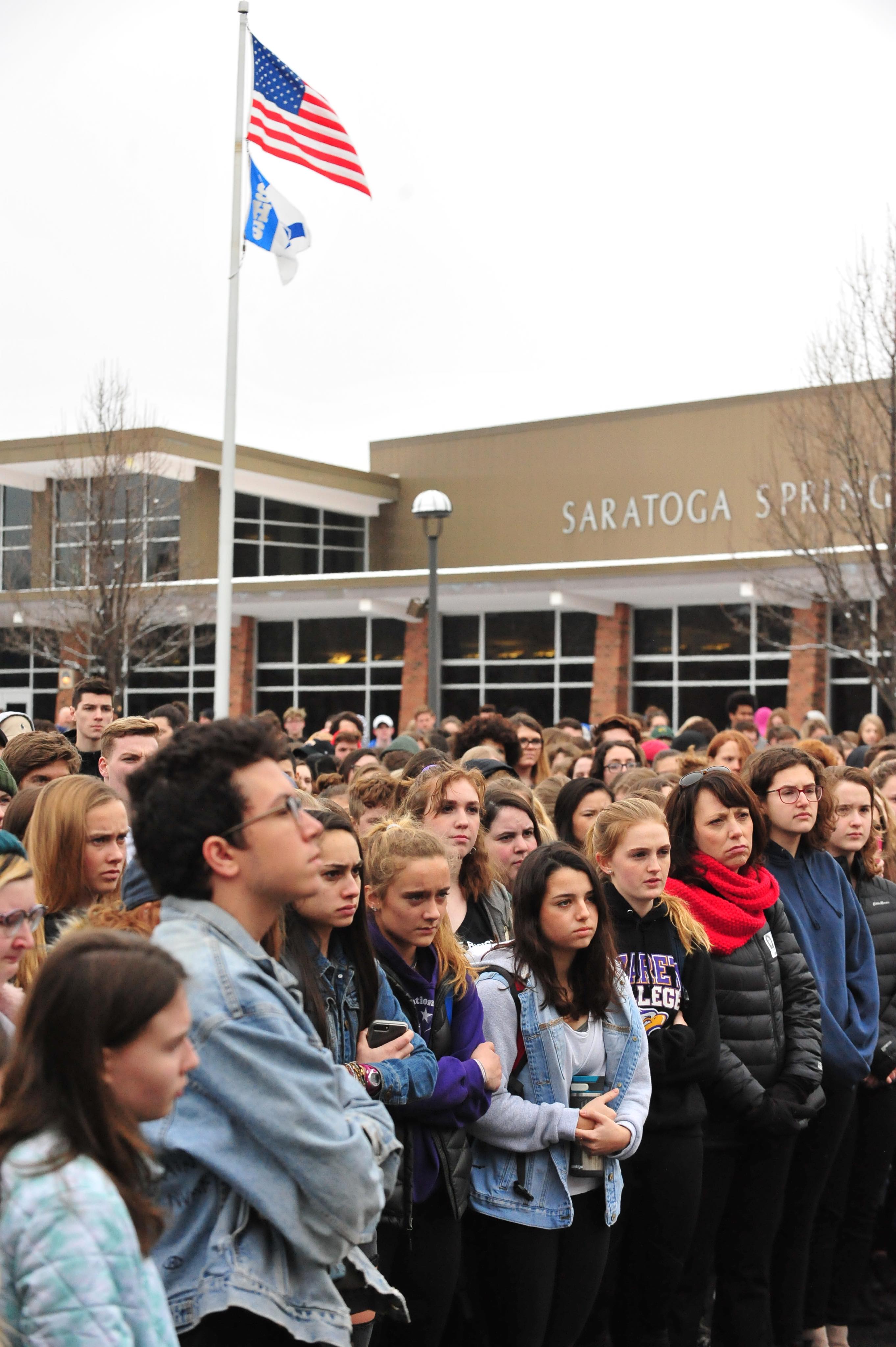 SARATOGA COUNTY —  On February 14, Marjory Stoneman Douglas High School in Parkland, FL suffered an unimaginable tragedy: 17 people were gunned down by a teenager with a gun. In the month since, students across America have become involved with supporting the students at Stoneman Douglas. On a local level, activism took many forms.

“We’re glad that you’re all choosing to walk-out today. We’ve gathered here to honor the lives of the 17 students and teachers that passed one month ago. But never again should we have to do this. This marks the beginning of an end. An end for gun violence in our schools. Because enough is enough. We should be able to go to school and not fear for our lives. We should be able to go to school and come back the next day. But we can’t take this for granted. We must put an end to the atrocities that are claiming the lives of our fellow students. We have the power to demand change. Now let’s use it to stop the violence in our schools once and for all,” the students at Saratoga Springs High School said, at the beginning of their walk-out.

“I sat down with a few student groups and tried to get an understanding of what the students wanted to do. They thought it was in the best interest of everyone in the building that we split what is activism and what is memorial,” said South Glens Falls Principal, Mody.

During third period, faculty and students engaged in discussion circles to confront issues about school violence, empathy, and the “SEE something – SAY something” philosophy. They also had a 17-second moment of silence. In the library, students also had the option to write letters to local representatives.

“The students were all engaged and that’s important. I always say, ‘educate not indoctrinate.’ My job is not to tell them what to do with their voice, but how to use it,” Mody said.

In Ballston Spa, a group of seniors kick-started their walkout organization.

“We have a sort of media committee, it’s a small group of seniors and we all divided up the responsibilities and we are the ones in charge of getting the media involved,” Joe Vesic said, referring to himself, Izzy Rutkey, and Joe McDonald, all seniors.

“One of the people that we’re working with tweeted ‘why can’t Ballston Spa participate in the walk-out?’ We all got on board with that and thought ‘yeah, why can’t we participate?’ So, we emailed our principal and we got her full support on the event and then we started to get people’s support outside of the small group of seniors that were working on it and it really grew into a big thing,” Vesic explained.

Aside from the principal’s support, the students also had the backing of most teachers and students.

“We have the majority of the school’s support; however, there is a small section of the school that I think their main reason for not supporting the movement is because they truly don’t understand what we’re calling for and once we explain it to the people that approach us showing resistance, they really do tend to come on board with our message,” Vesic said.

Vesic and the committee have spent their time listening to all of the various speeches that kids at Stoneman Douglas have been giving, along with watching clips from the Town Hall they had a few weeks ago. Ballston Spa’s message for the walk-out is simple: “mainly we’re calling for more background checks and limits on weapons of war,” explained McDonald.

Like the others, Ballston Spa’s walk-out lasted 17 minutes, honoring each victim of the shooting.

“Our main goal is definitely unity. With the election coming up, and a lot of us turning 18 soon or already 18, we will be able to register to vote and be able to vote in this upcoming election. If we start this conversation about what we, as teenagers and young adults, want and how we want to be represented in the government, then that will lead to us taking steps in November when we are able to vote and to have our opinions and our voices be heard,” Rutkey said.

The trio, however, remain realistic that a walk-out will not be the end-all be-all of what they’re fighting for.

“We won’t be giving up on this effort. I think that our motivation to have stricter background checks and limits on weapons of war is not going to stop with us walking out of school. We won’t stop calling our representatives or making our voices heard,” Vesic stated.

“I think that overall, Ballston Spa High School does a fantastic job of making sure we feel safe. We do have our regularly practiced lock down drills and in the past few weeks we have had a police presence throughout the day. I think individually, as a school, Ballston Spa does a great job, especially in response to a lock down we had at the beginning of the school year when a student did bring a gun to school. They handled that situation so well and made sure nothing like that has happened since. But on a state level and a federal level, that cannot be said about all schools, and we want to make sure it can be said about all schools,” Rutkey concluded.

After a teacher posted something on Facebook that one of her students had come up with, #whatsyour17, the Messitt girls were inspired to create their own similar idea.

“This project is not just for kids who aren’t walking out, it’s for everyone. I’ve met up with people that are organizing the walk-out and even they love this idea, they’re spreading it around, trying to get more people to do it, too. People in the middle schools are participating, a teacher from Colonie is also trying to get it into his school, as well,” Messitt explained.

Meg is the president of the newly minted Republican Club at the high school, but she says she doesn’t even factor that into her opinions on the walk-out, which
she finds to be very politically motivated, at all.

“What we’re doing [#Honor17] is not political at all. When we advertise this, I’m not even mentioning the club,” she explained.

Messitt said she felt pressure from some teachers to join the walk-out.

As far as her own personal safety, Messitt doesn’t feel unsafe but, “it wouldn’t hurt to put more thought into a better security system.”

Messitt did not participate in the walk-out.

Braeden Arthur, a sophomore at Saratoga Springs High School, found out about the event through social media and immediately decided he wanted to participate.

“I definitely think that for different people this walk-out means different things. Some people see it as just standing by those who unfortunately died in Parkland, and then some people see it as how some of the students from Parkland want us to see it; as this is a moment to bring attention to our administrators, President, NRA, and that students of this generation in particular have had enough of the gun violence and in a setting where students shouldn’t necessarily have to be afraid, no less,” Arthur stated.

For Arthur, his reasons behind participating are simple: “for me, personally, the walk-out is about students talking to the adults who happen to be running the country now.”

Arthur is aware of the #Honor17 project, “I like the idea of creating a kinder environment and I definitely think that’s a good way to, again, lower the risk of anything ever happening by making people feel more welcome. If kids felt more welcome and less singled out, maybe we wouldn’t have a situation where the solution is to hurt the people around them,” Arthur said.

Arthur commends the district for increasing security on the campus to make it an even safer environment.

“Do I think I’m personally safe? I’d say that I do feel safe, then again, I’m sure the kids at Stoneman Douglas thought they were safe, too” he said.

Matthew Taylor, one of the 10 initial students who organized the walk-out, doesn’t believe this to be political in nature.

“We haven’t taken a stand, it’s not about gun control, it’s mainly about walking out in solidarity with the students from Parkland. It’s to represent that this time, it’s going to be different, it isn’t just going to fade away into a distant memory. I understand that a lot of students are saying that ‘kindness and promoting kindness is something that we can do’ and although kindness is important, you must change hearts and laws, because that’s the only way real change will occur. You should be kind to people all of the time,” Taylor said.

Students from Saratoga Springs High School are currently raising money to charter a bus for those who would like to participate in the Washington, D.C. walk-out on Saturday, March 24.

“The walk-out is really about empowerment and making sure students know all of the ways they can get involved and they can voice their opinion, regardless of what side of the aisle they’re on. That’s why it’s not really that political. It’s just an issue that needs to be addressed,” Taylor said.

Maple Avenue Middle School also participated in the walk-out. While most schools across the county supported the walkout movement or provided an alternative, Schuylerville Central School threatened students with disciplinary actions and would treat walking out as an unexcused absence.