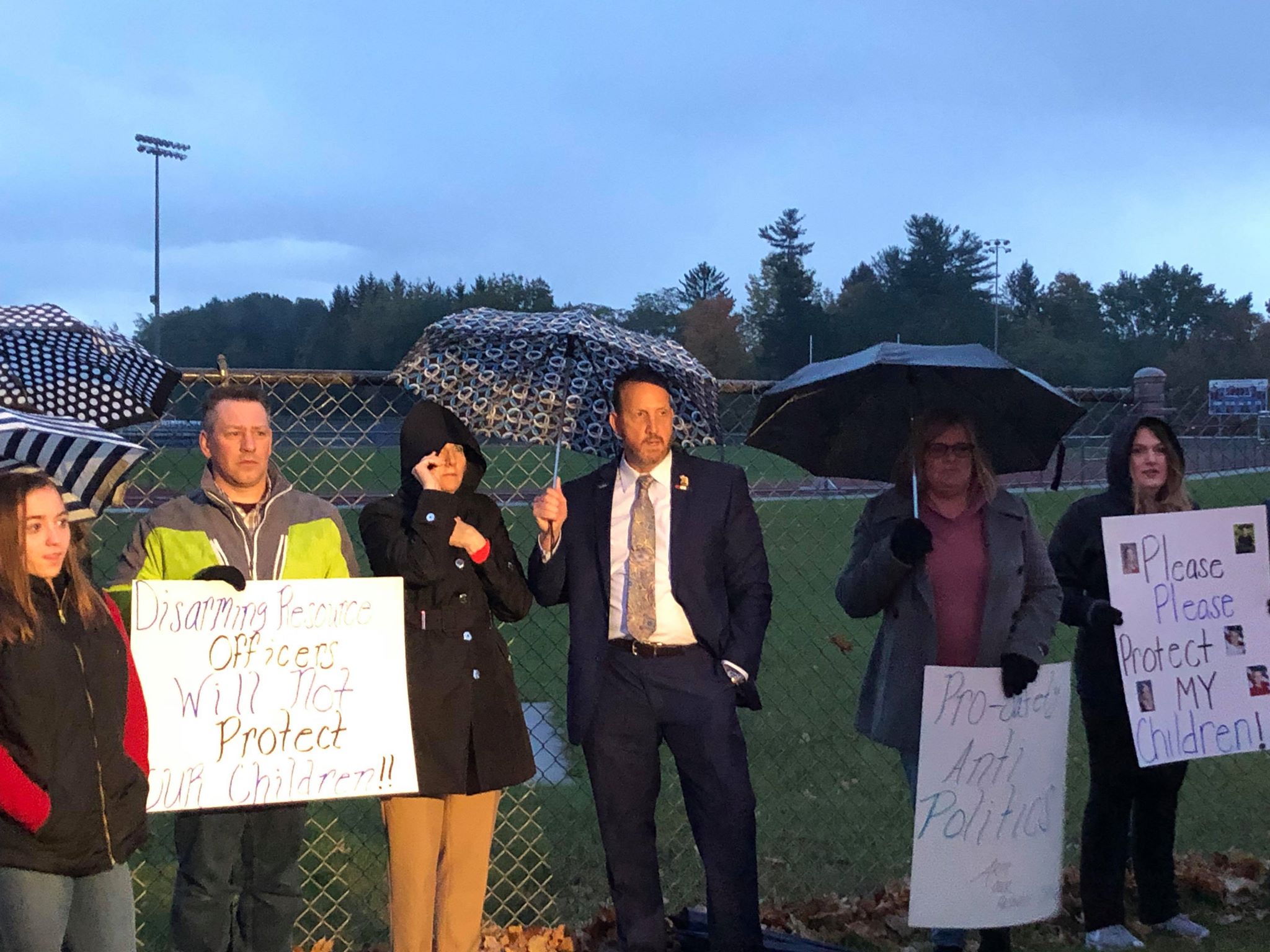 SARATOGA SPRINGS — The never-ending battle between the Saratoga Springs CSD Board of Education and Saratoga Parents for Safer Schools (SPFSC) continues to rage on. After the school board voted 5-4 on October 9 to end the practice of school resource officers carrying firearms, some parents and community members decided to fight back. This included the creation of Saratoga Parents for Safer School, “an organization built by parents and community members in the wake of the Oct 9, 2018 decision by the Saratoga Springs Board of Education to remove the historically proven armed security monitors from campus.  The organization’s goal is to reauthorize the armed grounds monitor program.”

On Thursday, November 1, SPFSC met with school administrators and board members to discuss school safety and the next steps. With the meeting lasting about an hour, all topics related to school safety were discussed. According to a press release from SPFSC, the members left the meeting with a commitment from the board to do the following:

“While we appreciate the school administration’s willingness to listen to our concerns, our organization made it clear to the administration that these commitments were not enough and do not fully address our safety concerns. Saratoga Parents for Safer Schools will continue to work with the board, and community to regain the same level of school security that the district had over the past 30+ years,” the press release continued.

SPFSC brought their resolution to the City Council on Monday, November 5, and it was adopted 5-0.

The City Council resolution calls for “trained, educated, experienced and certified individuals, namely active law enforcement personnel, to carry firearms” and recommends a collaborative plan between the city council, the school district, the county board of supervisors and the Saratoga County Sheriff’s office be put in place “which will again permit appropriately trained and certified individuals to possess a firearm while on school grounds including, but not limited to, the potential expansion of SROs to all schools within the District.” This resolution is the first step towards increased safety within our schools.

“However, we will continue to work diligently to ensure these suggested measures, and more, will be adopted by the school district. With the current city shortage of Police Officers, we still need to pursue the option of allowing recently retired, skilled and qualified Officers to protect our children,” the SPFSC stated.

According to News 10, who received a statement from the Board of Education:

“The Saratoga Springs City School District is committed to creating a safe and supportive learning environment for all students, staff, and visitors. The Board of Education and District Emergency Response Team place a strong emphasis on utilizing a comprehensive approach to school safety. This includes supporting the social and emotional health of all students, maintaining strong partnerships with local law enforcement, ongoing training and drills to prepare for emergency situations, and continuous improvements to our safety and security infrastructure and procedures. For the past several months, district administration worked with the Board of Education to research the authorization process of qualified individuals to carry firearms on school property while performing their job duties. The Gun-Free School Zones Act of 1990 prohibits anyone from knowingly possessing a firearm on school grounds without proper authorization. In the past, some grounds monitors possessed a firearm on district property without knowing that prior written permission was required from the Board of Education. When district officials determined that the practice was not in compliance with the current law, grounds monitors were instructed not to carry a firearm on school property until proper authorization was obtained. School district officials and the Board of Education did their due diligence by researching this topic for several months gathering feedback from our partners in law enforcement, our school district insurance carrier, our school district attorney, listening to public comments, learning about best practices from neighboring school districts, and a presentation from the District Emergency Response Team. At the October 9th Board of Education meeting, the Board voted against approving the authorization. Safety is an underlying theme in everything that we do and the safety and security of students is our number one priority. The Board of Education appreciates the dedication and support of our full-time School Resource Officer who is an active duty, armed City of Saratoga Springs Police Officer. The district also continues to staff both full and part-time grounds monitors who help maintain a safe and orderly environment in and around our schools. The District is in the process of evaluating our current safety and security procedures, including conducting a risk/ threat assessment of all schools by an independent school safety specialist. The District will continue to gather feedback from all stakeholders and will be hosting a school safety community forum in the upcoming months to share the results of the threat assessment and recommendations that the BOE will consider to help improve our overall safety plan. The District appreciates the support that has been offered by the Saratoga Springs City Council and the Saratoga County Board of Supervisors for sharing in the responsibility of ensuring that our schools are safe for all students.”

SPFSC is unsatisfied with these developments, claiming that the BOE did not take the recommendations of the Saratoga Springs Police Department, nor did they talk to the Sherriff’s office, or speak to anyone at National Associate of School Resource Officers (NASRO), among other things. The next BOE meeting will be held on November 13 at Maple Avenue Middle School.

More in this category: « Ballston Spa School District Happenings St. Clement’s Scores Above Average for New York State Testing in 2018 »
back to top