SARATOGA SPRINGS N.Y. — It’s a Tuesday morning, Cecilia Axe is sitting in a fluorescently lit room at the Saratoga Bridges office with her parents, and Pamela Polacsek discussing the upcoming Autism Expo at the Saratoga City Center. There is a water cooler on the other side of the room, and a man walks in and fills up his cup of water. Everyone in the room is carrying on with their conversation, except Cecilia, who’s attention was derailed by the subtle pitter-patter of water filling up a cup. This is not uncommon for someone who is Autistic.

“That guy filling up water right now,” says Cecilia’s father John Axe.  “That was just as prevalent with her as you and I talking right now, but for us, we just put that in the background.”

According to the Center for Disease Control and Prevention, one in 59 children are identified with Autism Spectrum Disorder, which is a pervasive neurological developmental condition. It can often be characterized by apparent deficits in communication skills and behaviors.

“I’m not really quite in tune with trends and social rules. I always offer a unique perspective on things. That can help with a lot of things - I have my own unique voice I guess,” says Cecilia Axe.

Cecilia who is 15-years-old now was diagnosed with autism spectrum disorder when she was four-years-old. She progressed through pre-school at the ages of three and four, but it wasn’t until she entered kindergarten when Cecilia’s seemingly odd behavior was drawn to her mother’s attention. She would be sent to the principal’s office every day, but she enjoyed being sent to the principal which her teachers told her mother that said behavior was not like most children’s. 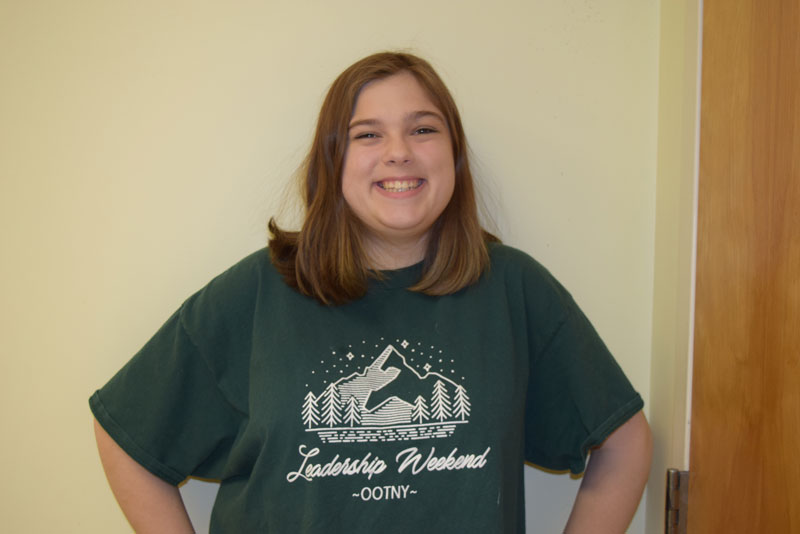 “I knew my kid was different,” said Cecelia’s mother Allison Defibaugh. “I couldn’t leave her with other people, and she couldn’t get her needs met; she wouldn’t ask for a drink, she wouldn’t ask for food, she didn’t know how to stand in lines, or what lines were even for. She had behaviors that should not have persisted to the age that she was.”

According to a study done by the American Academy of Pediatrics, autism spectrum disorder shows more to be 3.46 times more prevalent in boys than girls.

For Defibaugh, the most challenging part of this diagnosis was not having answers or guidance as to how to best support her child.

Cecilia is a member of her local Triangle organization, which focuses on three pillars; a duty to God, a duty to one’s self and a duty to others. To fulfill her duty to others Cecilia sought out an organization to dedicate her time to volunteer with and selected the Autism Expo, hosted by the Upstate Autism Alliance, Skidmore College Psychology Department and Saratoga Bridges. This expo provides a collective space for individuals who are autistic, and those caring for people who are autistic to find a myriad of information ranging from doctors, schools to autistic friendly travel agencies.

For the past three years, Cecelia has volunteered to greet the attendees, assisting vendors with registration, and has been a comforting peer to those attending the expo who may have a loved one who is autistic, or who may be autistic themselves. She believes this expo is very important for people to know about.

“If you need any help with anything, that there is at least one group there that provides certain help that you need. There is a way to access a lot of different material, and sign up for things like camps,” said Axe.

While the representation of autistic people is becoming more prevalent in mainstream media, many sometimes promote a lot of misconceptions.

“It’s not as bad as it seems. There are certainly some people who think that having it will ruin your life or make everything ten times difficult. I say it’s like anything in life where it has benefits and some drawbacks to it,” said Axe. “I may have some in social situations. But it also helps in let’s say, for animation, I’m going into for my career and my autism helps with attention to detail where I can notice small things in a drawing and help make it better. I can see things in my head. I can use my own imagination as references.”

The 2019 Autism Expo will take place Sunday, April 14, at the Saratoga City Center.

More in this category: « Saratoga Springs School Board Election Candidates are Prioritizing Community Communications Saratoga Student Selected to Join Youth Education Summit at the Nation’s Capital »
back to top