Ava Dallas: Athlete of the Week 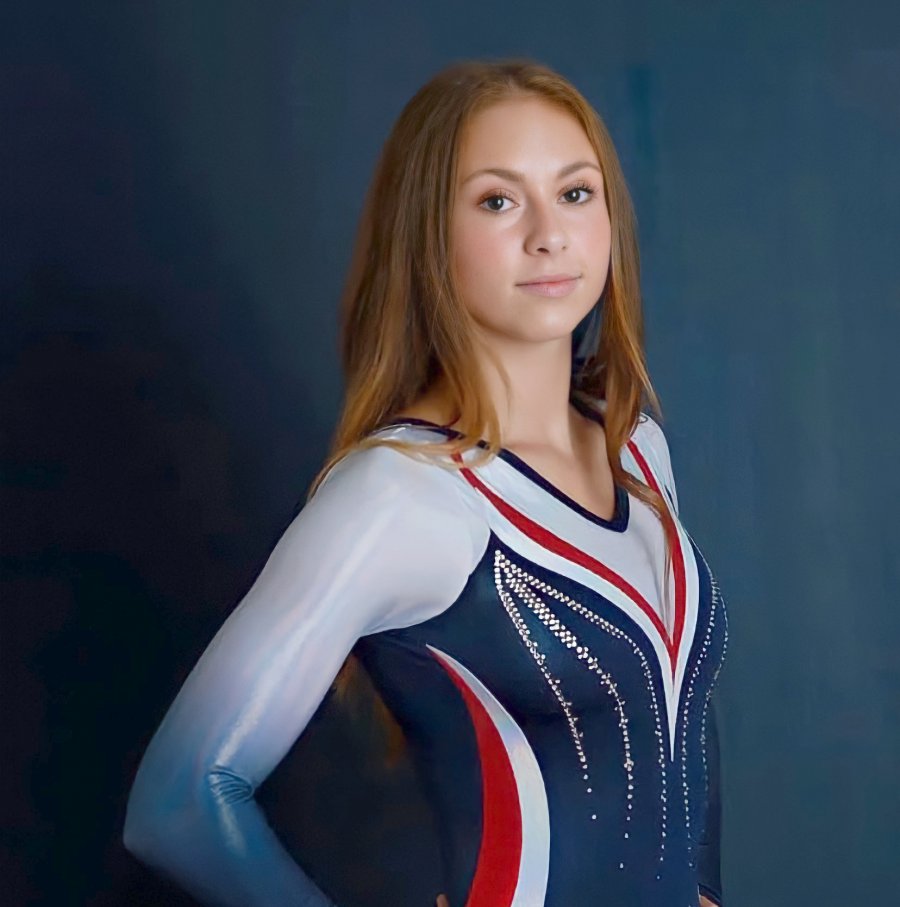 Congratulations to this week’s Athlete of the Week – Ava Dallas!

Ava is a senior gymnast at Saratoga Springs High School. Some of her athletic accomplishments include winning the Section II gymnastics all-around title as a freshman during the 2017-2018 season, placing second in the Section II gymnastics all-around title in the 2018-2019 and 2019-2020 seasons, and taking first in the all-around competition and leading her team to victory at the Suburban Council League Championship in February of this year. She placed first in three individual events: the bar, the floor, and the beam. She will graduate this year as the school record holder on the balance beam with a score of 9.60.

Ava also excels in the classroom, maintaining a 99 average and taking mostly Honors and Advanced Placement courses. She teaches youth gymnastic classes at the Wilton YMCA. After she graduates, Ava plans to attend an Ivy League college, namely Yale or Cornell, to get a great education and continue to succeed in gymnastics at the collegiate-level.

Athlete of the Week: Ava Dallas 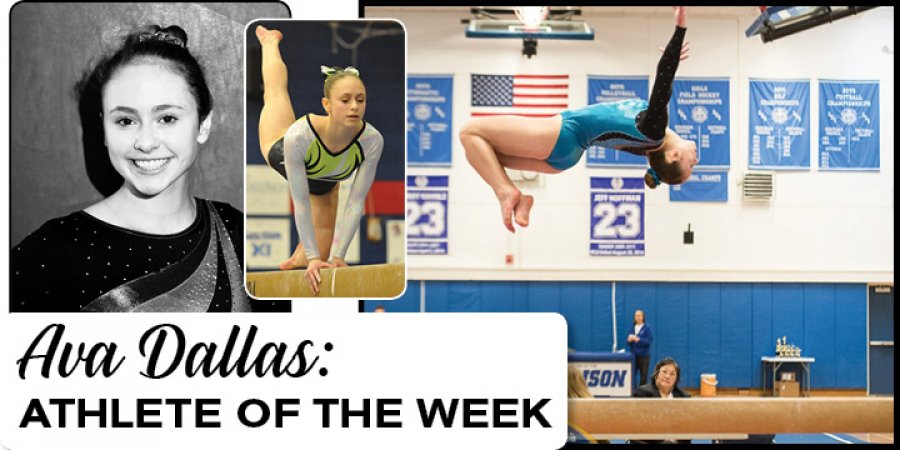 SARATOGA SPRINGS — “Gymnastics has made me strong. I feel like it broke me down to my lowest point, but at the same time, it has given me the greatest strength anyone could ask for.” – Olympian Shawn Johnson.

Ava Dallas is a record-breaking 17-year-old junior at Saratoga Springs High School with a passion for gymnastics that she pursues, regardless of the injuries or other things she sacrifices to succeed.

“I started when I was really little, around two years old, and I stopped for a while but then I started to get serious about it when I was 10,” she explained.

“Just watching college gymnastics on TV and the summer Olympics, I got really inspired and then I started taking classes at the Y and then I joined the team there.”

Dallas then switched to a club team which was more serious and eventually made the choice to join the school’s team full time. She was with Stepping Star for three years and then switched to the high school team because she wanted something more team oriented and with less hours in the gym. From November to the end of February, the gym is where you can find her.

"Right after the season is over, we have about a month and a half off and then we go back to practicing on Sundays and then when it gets into the summer, we practice twice a week,” Dallas specified.

Dallas currently holds the Section II record for vaulting, which is 9.475.

"My freshmen year on the team, I broke the record for the first time and then last year I broke it once in the beginning of the year and then once again at the end of the year at the state meet,” she explained.

However, she is still recovering from a stress fracture in her back from over the summer.

“It was very hard for me to do anything because it was so painful. When I went to the doctor, he advised that I slow down and possibly stop to prevent any further injury. I didn't want to do that and compromise my junior season so I modified my routines to do skills that didn't hurt me and now I’m building back all of my skills and all of my routines to get back to where I want to be,” Dallas said.

Dallas also coaches the little girls the basics of gymnastics at the Wilton YMCA.

"Coaching the little girls definitely provides a different perspective on the sport. As a coach, you have to think about putting the skill into words that the little kids would understand and sometimes it takes multiple times to explain things so it really makes you think about every single little part of each skill that you do. Also, to see them enjoy it as much as they do, it really brings a new enjoyment for me,” she mused.

Her family supports one another tremendously. Her sister cheers at Syracuse and the family goes to watch her games whenever they can.

She cites her father as her biggest fan: "it means a lot, I can always look over and see him cheering for me… He's like my number one fan," she laughed.

SARATOGA SPRINGS — Five-time Olympic gold medalist Nadia Comaneci visited the Saratoga Regional YMCA, Wilton Branch to mentor the Saratoga Springs High School gymnastics team. Comaneci was in the region to announce her role as an honorary captain to the inaugural Aurora Games. The introductory event will take place on August 20 in Albany.

Comaneci was greeted by a chorus of cheers coming from the Saratoga Springs High School gymnastics team. She shared with the bright-eyed boys and girls her ongoing passion and gratitude of the sport that made her who she is today both personally and professionally.

“Not too many women’s sports were available in the late sixties. My life shaped because of that,” said Comaneci. “In a way, I don’t think anything else helps you with discipline and responsibilities as sports does.”

Among the Saratoga High School gymnasts was 16-year old Ava Dallas, who holds the sectional record in vault. Dallas, who has never trained with a notable Olympian before today—let alone her idol, demonstrated her vault routine for Comaneci. “I was probably more nervous than at a meet,” said Dallas.

Deb Smarrow, who has coached the Saratoga High School gymnastics team for 13 seasons helped organize this memorable event. Comaneci is the most notable gymnast to speak to these eager gymnasts and coach.

“She’s an idol of mine,” said Smarrow. “I watched her in the ‘76 Olympics when I was six years old.”

The Saratoga High School gymnastics team is striving for their 13th consecutive title. “To have this kind of inspiration before we go into our sectional play in February is unbelievable,” expressed Smarrow.

As a token of gratitude, Comaneci was awarded honorary Saratoga High School varsity letters by Coach Smarrow and her team.

“I’m hoping that the biggest take away is inspiration and validation of their passion,” said Smarrow. “And that they’re not wasting their time, and that this does lead somewhere else. And that it leads to bigger things.”

Comaneci would like to keep the spirit of gymnastics alive and reminded the team to “Keep doing what you love, gymnastics is fun!"

Ava Dallas: Athlete of the Week

SARATOGA SPRINGS — Ava Dallas, a freshman at Saratoga Springs High School, is already breaking records for the district. Last Saturday, Dallas broke the Section II vault record; it was previously 9.325 in time and she had a 9.4.

“It was really exciting, and it was nice to see that my hard work paid off. It was also a great experience to see my coaches and teammates and how they congratulated me, it really made me feel good,” Dallas explained.

Dallas is also a cheerleader during football season, having started that this year.

“Cheer was really fun, it was very different for me because it was something I hadn’t done before and I was a flyer so I went up in the stunts. It was fun to learn something new and if I don’t make it into college for gymnastics I have something to fall back on. I plan to do it again next football season,” Dallas said.

Other than sports, Dallas is also in the Best Buddies program at school.

“The Best Buddies program is basically you are paired with somebody with learning disabilities and you get to go to events with them and really spend time and become friends with them. I went to the clubs’ fair during the walk-through at the high school and I was really interested in it, so I decided to join. My sister also did it,” she said.

Dallas started doing gymnastics at only 10-years-old at the YMCA, doing the beginning levels. She then transitioned into a club team called Stepping Star in Ballston Spa.

“After two years at Stepping Star, I decided it was very time consuming and since I was going into high school, I wanted something less time consuming, so I decided that I would start varsity gymnastics at school,” Dallas explained.

She has dreams of doing gymnastics in college and is attending a camp this summer at Penn State where she intends to scope out the gymnastics program there.

“When I was younger I really wanted to go to the Olympics but as you get older, gymnastics is such a very hard sport on the body; it’s not really likely at my age now to be able train elite and then go to the Olympics, but I still want to go to college for it,” she said.

Dallas loves her gymnastics team and immediately felt at ease once the season started.

“It was very easy to make the transition from club to team. The girls and coaches are really friendly.”

Her favorite gymnast is Laurie Hernandez.

“I love how expressive she is in her floor routine; she really makes it look fun,” Dallas explained.

Dallas’ favorite part of gymnastics is the floor routine. Dallas is also an Honors student.

“Her mother and I are quiteproud of her accomplishments. She is able to juggle everything and still maintain a 98 average while taking all Honors classes, no less,” said her father, Eugene Dallas.

Dallas cites her mom as her main inspiration.

“I really want to make my mom proud because she gets really excited when I go to competitions  and she’s really there to support me through everything. Even at school when I have a test, she’s like ‘good luck’ and it makes me feel really good inside,” Dallas said.

For more information on when the Saratoga Springs gymnastics team plays, check out the Sports At a Glance page. 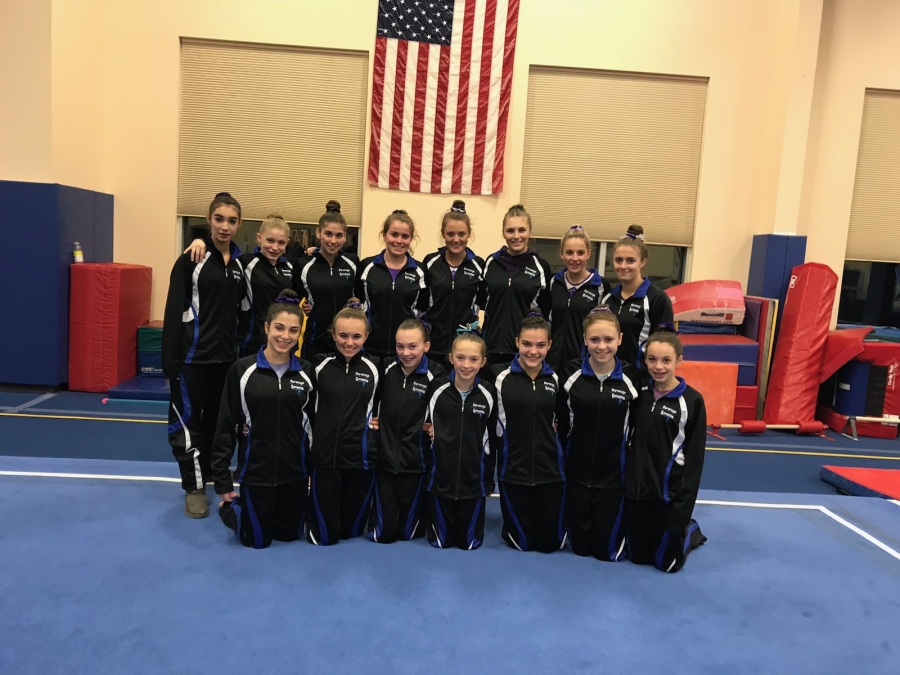