Louise Rourke Conquers the Queen of Lakes for Polio 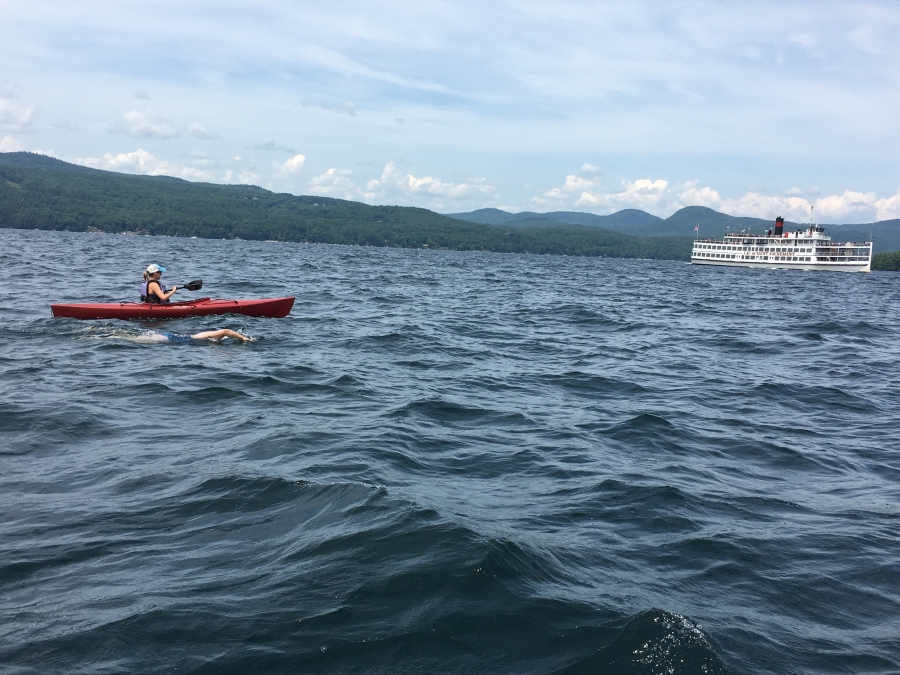 LAKE GEORGE — Louise Rourke, a polio survivor, and Bridget Simpson just recently swam the length of Lake George relay-style on Monday, July 30. They began their journey at 6:30 a.m. and completed their 21-hour swim at 3 a.m.

“It was really a very amazing and fulfilling experience for me; it was pretty emotional at the start to see so many people there and it was such a quiet, calm, beautiful morning. The weather really cooperated for us and it was wonderful having my husband, he drove the boat, but also both my son and daughter-in-law in the boat helping,” Rourke expressed.

“There were a lot of logistics involved with the planning and to just see it all come together and go smoothly and go really faster than I anticipated,” she said.

Rourke’s most difficult part was the night time section of the swim.

“You lose perspective in terms of where everything is. You don’t have that depth perception. My husband had put LED lights on the bow of our boat so that we could clearly see where the boat was,” she explained.

While Rourke started the swim, doing the first six miles from the north village, Bridget did the next six miles and they alternated the entire swim.

“I would say that was the roughest part of the lake because there’s more boat traffic by that time of day. Even though it was a Monday, it was a beautiful weather day so there were boats out and about,” she explained.

Once they began their swim, “I was overwhelmed as more and more people kept showing up. That was just wonderful,” Rourke commented.

As the relay got to the end, it was Simpson’s turn to swim the last six miles, but Rourke decided to jump back in a quarter mile before the end, so they could finish together.

“At 3 a.m. there were people there at the finish. A lot of them Rotarians. To see their white lights waving and hear the cheering and it was really something. One of the Rotarians told me they had stayed overnight in Ticonderoga so that they could be sure to be there to greet us,” she reminisced.

“My whole reason for doing this swim was to raise awareness about the lingering existence of Polio in the world and the need for immunizations in general. I think a lot of young people today don’t understand what Polio is and they’ve never experienced it so they don’t know what a devastating disease it is; they don’t understand that it could come roaring back,” Rourke said, stressing the purpose of their swim.

Donations are still being raised for Rourke’s cause through the Saratoga Rotary Club. People can donate online at www.portal.clubrunner. ca/50091/Event/swim-to-endpolio. Every dollar donated will equal three to Polio eradication.

“At the finish it was also very emotional but really almost at that point, it was amazing to imagine that we were there, and we had done it and that it was over with. It was really pretty amazing experience,” Rourke concluded.