Displaying items by tag: For Freedoms 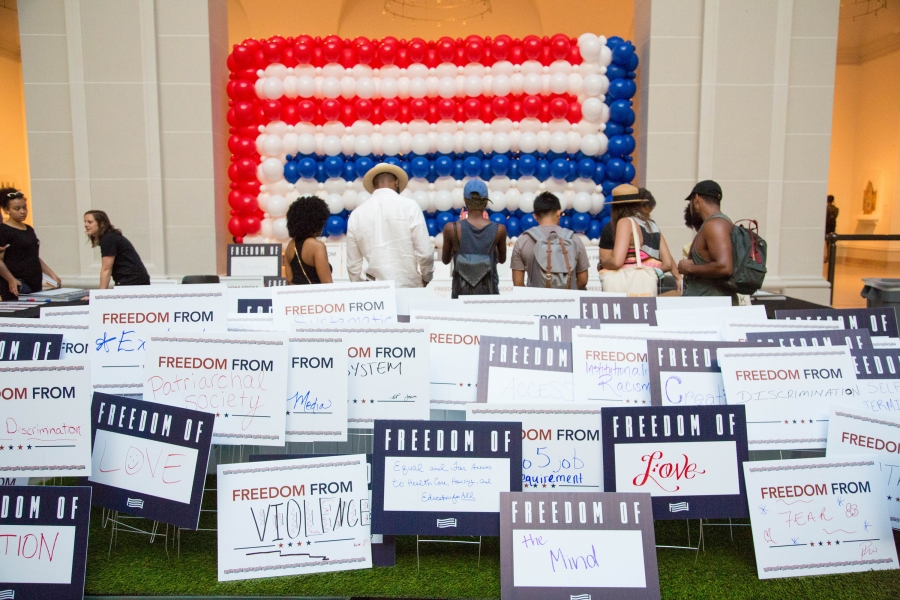 SARATOGA SPRINGS — The Frances Young Tang Teaching Museum and Art Gallery at Skidmore College held a nonpartisan voter-registration drive and the launch of a For Freedoms public art project from 5 to 7 p.m. on Tuesday, September 25, which was also National Voter Registration Day, in conjunction with the exhibition Give a damn. Skidmore College students from the Student Government Association registered people to vote ahead of the November 6 midterm elections. For the public art project, participants were invited to share their own definition of freedom on yard signs, which was inspired by campaign signage, by completing one of following phrases:

After participants articulated a vision of freedom in their own way, they were then invited to have their signs installed outside the Tang. They will stay on view as part of a public art project called For Freedoms through the November election. Those who wished to display their signs at their own homes were encouraged to share images of their signs on social media with the hashtags #ForFreedoms, #50StateInitiative as well as #TangMuseum. The public art project is a collaboration between the Tang Teaching Museum and For Freedoms, an organization founded by the artists Hank Willis Thomas and Eric Gottesman that seeks to use art to deepen public discussions of civic issues and core values, and to clarify that citizenship in American society is defined by participation, not by ideology. The For Freedoms public art exhibition is organized by Assistant Director for Engagement Tom Yoshikami and the Tang Student Advisory Council, in conjunction with For Freedoms.