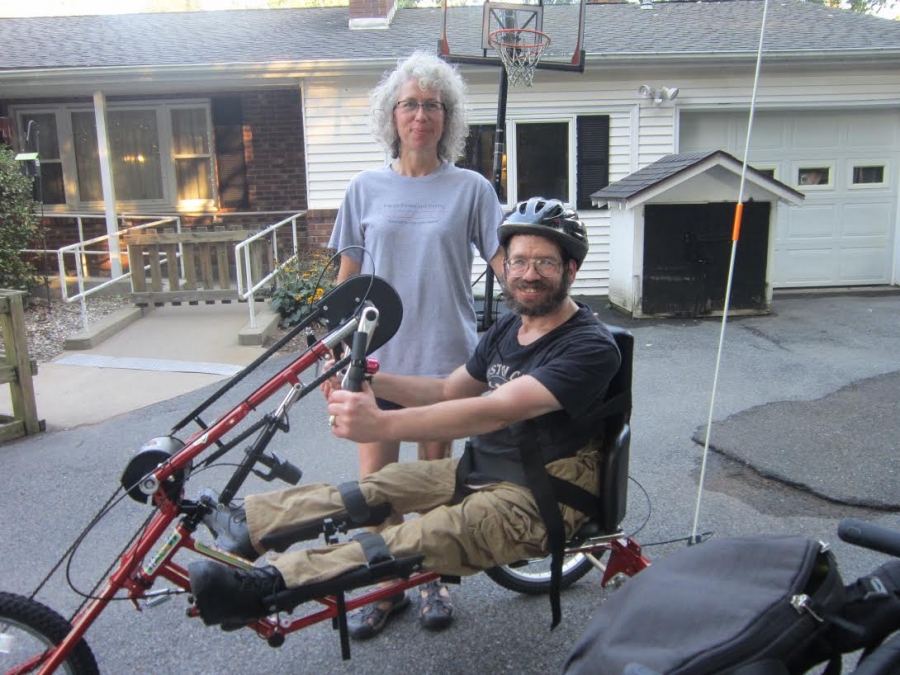 SARATOGA SPRINGS — From 9:30 a.m. to noon on Saturday, Oct. 13, Steve Remis will be using his brand-new hand cycle to take on the 18th Annual Great Pumpkin Challenge at Spa State Park. This will be Remis’ second Great Pumpkin Challenge and the first race he’s done with his new handcycle. Remis, 47, began racing via his hand cycle in 2016, the year in which he did a whopping six races.

“I don’t believe in the words ‘can’t or don’t.’ After doing all of the races I’ve done, I don’t feel like anything is impossible.” Remis says, of all components of his life, not just racing.

Paralyzed from the waist down from Spina Bifida, Remis carries on.

“I have an upper body that is like King Kong,” he said.

Remis does 10Ks using a handcycle, which is a humanpowered land vehicle powered by the arms rather than the legs.

“My assistant manager and I, from my group home, would take one of the vans and drive each course, so I would know where the hills were. My old handcycle had no power, just three speeds. It went down to two because I lost second gear. I don’t know how that happened,” he laughed.

Remis’ sister purchased a new handcycle for him this year, “to the tune of four-thousand dollars,” and now he is ready to race again. His new handcycle has five speeds, reverse, a parking brake, and a hand brake.

“I surprise people because they think I’m going to do the 5k and I’m like ‘5k? no, 10k!’ I’ve had people collapse in shock. That was with my old hand cycle which was like 40 years old,” he explained.

Remis’ first handcycle was purchased for him in 1978 by his mother after she saw an ad for one in the newspaper. He had been using a six-wheeled vehicle called a Well-Rider that was as low as a car’s headlights. He used that handcycle until just recently, it lasted 40 years. All of the money raised through The Great Pumpkin Challenge goes back into the programs and services provided by Saratoga Bridges, so Remis and his friends are directly affected by this race.

“[Racing is] very fulfilling, I enjoy it and have enjoyed it for the last few years that I’ve done it. It was a no-brainer, I’m doing The Great Pumpkin Challenge again this year,” Remis said.

He was hesitant about The Great Pumpkin Challenge at first though, because he hasn’t raced at all this year, then when he learned he was getting his new handcycle via
the mail on time, he was ready to go.

All of the money raised through The Great Pumpkin Challenge goes back into programs and services provided by Saratoga Bridges.