Kromm attributes her strong staff of educators to the students’ massive success.

“The teachers work cooperatively, not only at their own grade level but share information from grade level to grade level so that helps to advance the children in our program. All the way from pre-k all the way up, we have excellent teachers. I think if they worked in isolation that would be a problem but they’re a very close community,” Kromm said, explaining the reason for the success rate.

Kromm suggests that another reason for the high numbers it the schools’ STEM program.

Which she says, “of course stresses problem solving, and creative thinking, and it tries to make real world applications. There is a lot of hands on activity. So, there is writing in the STEM program that is across the curriculum.”

Kromm admits that the common core may have been introduced too quickly and may also be the reason for some public-school numbers.

The common core was launched in 2009 by state leaders, including governors and state commissioners of education.

“I think pieces of the common core are great. Again, the problem was that it was introduced so quickly and I think that New York State is trying to address that. There is going to be a next generation and the process of introducing it is a little slower so that everyone can get a good grasp of them and I think we learned from the original push out of the standards,” Kromm explained.

While the school is celebrating this accomplishment, Kromm wants to remind everyone that there is much more to St. Clement’s than numbers and statistics.

“There is so much more to a school than a stand-alone number. What makes us special is our educators, the commitment of our parents, and being small enough so that we know every child that’s in here. The upper grades know the lower grades and they have a great buddy system with them. We’re celebrating this and it’s wonderful, but it is a piece of the whole picture and that when you learn about the other pieces, that’s what makes our school so special,” Kromm stated. 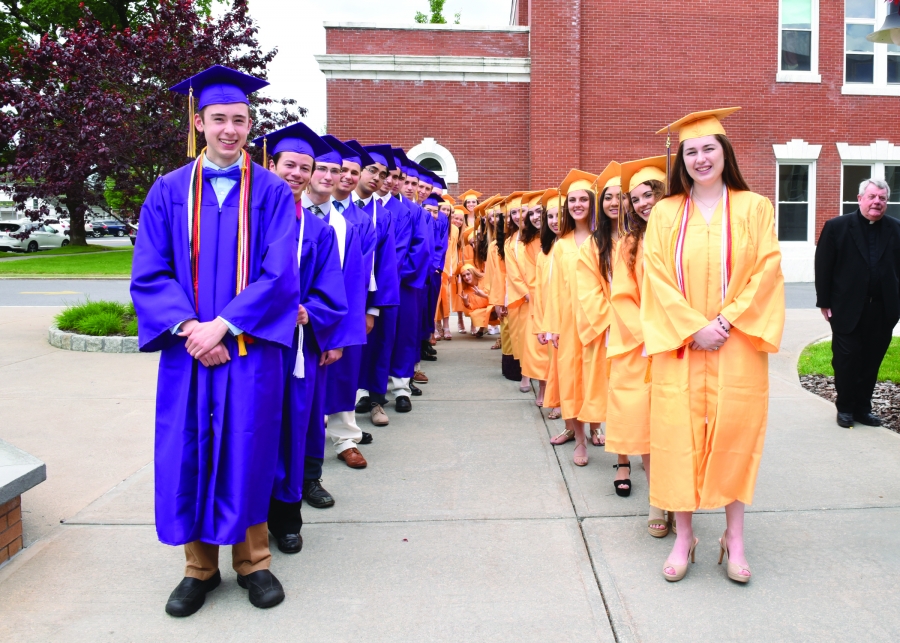 SARATOGA SPRINGS – On the morning of June 9, in the St. Clements Roman Catholic Church in Saratoga Springs, Saratoga Central Catholic High School held its graduation ceremony for the class of 2017, awarding diplomas to its 31 graduating seniors. This year’s valedictorian was Emma VanDeCar, while salutatorian was Paul Ruger. According to Mary Guarnieri, the school’s director of advancement, their graduating class for 2017 has already been offered over $6,425,000 in academic scholarships.