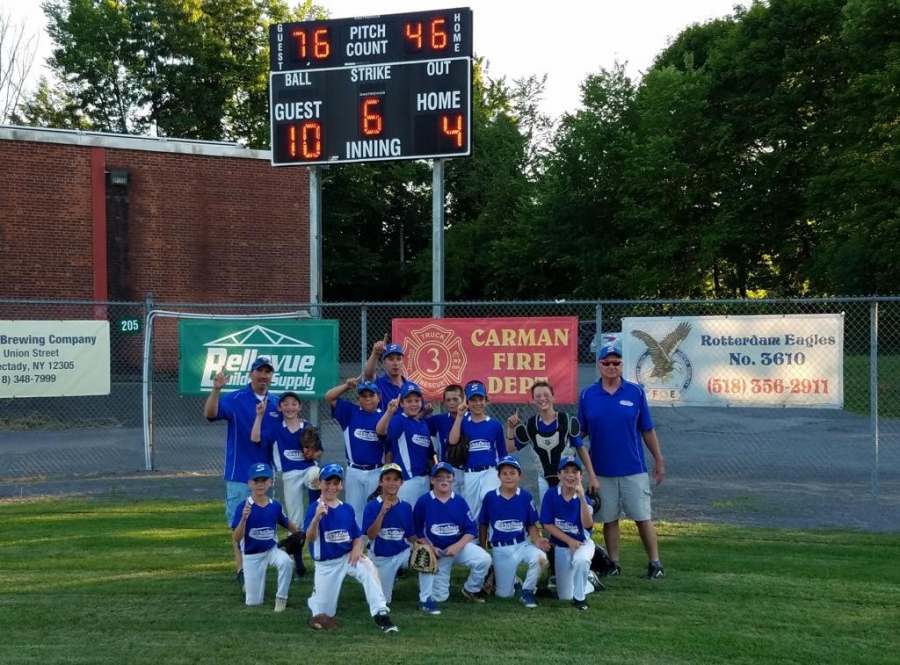 Cudney’s Launderers  43 – Village Photo  25
Cudney’s used Nick Scalo’s game high 15 points, along with Channing Adriance 14 points, and Antone Robbens 11 points to get a 43 to 25 victory. Village Photo’s Ben Van Valkenburg had 13 points and Kemauri Johnson dropped in another eight points in the loss.

Berkshire Hathaway Blake Realtors  42 – Saratoga PBA  31
The realtors got off to a big first half and led PBA by 16 points at halftime while PBA picked it up in the second half they came up just a little short losing 42 to 31. Logan Bevan and Niko VamValis each scored 12 points along with teammates Tom Villano and Stephen Bebee dropped in seven points apiece in the victory. PBA spread the points around led by Emelyn Tineo with 8 points while Alexander Savage’s
6 points, Trey Stanislowsky and Connor Johnson 5 points each.

Synergy Promotions  33 – Saratoga Springs Firefighters  22
In what turned out to be a defensive battle, Synergy kept the firefighters at bay most of the night and held on for a 33 to 22 victory. Pat Deschaine was high scorer for the winners with 13 points, Elijah Woods and Gordon Murray chipped in eight and six points respectively. Charlie Didonato led all scorers with a game high 15 points in the loss.

Saratoga Springs Little League
The 12s won the District Championship series with a 9 to 5 victory over Rotterdam-Carman! They went into the bottom of the 6th down 5 to 3 and walked it off in dramatic fashion with an Owen Redick grand slam!
The 10s won the District Championship series with a 10 to 4 victory over RotterdamCarman! Colin Mack pitched a complete game for Saratoga with 5 Ks along the way. Colin was supported all night by a strong defense which was led by Cooper Villiere in Center Field. At the plate Colin Mack led the way with 4 hits and Cooper Villiere, Nate More, Jackson Covell and Noah Sanita contributed 2 hits each. This gives SSLL all 3 District 11/12 Championships (10U, 11U and 12U) for the first time in the league’s long history. Congratulations to the entire SSLL community for fostering such a great program.  Congratulations to the players and coaches for getting the job done on the field.  All 3 teams move on to play in 3 game series with Saratoga Springs Little League District 10/37 champions for the Section 2 North crown and a spot in the 8 team State tournament.
10s are playing New Hartford from District 10, 11s are playing Plattsburgh from District 37 and 12s opponent is to be determined on Thursday when Plattsburgh plays against Marcy-Deerfield.  The 12s will be in action at home this Saturday, July 14 while the 10s and 11s will be in action at home on Sunday, July 15 (check back to the site for game times, some are currently TBD). The 8s were also in action Monday night and beat Schuylerville 9 to 3 to take 3rd place in the Summer Sizzler blue division. They played their best defensive game of the summer holding a good hitting team to only 3 runs led by Ceko Cupp making plays at the hot corner and Ethan booth throwing a runner out at 2B going for a double. The bats woke up in the 4th with an inside the park HR by Ben Isenovski and again in the 5th with back-to-back doubles by Jaxon Brahler, Liam Creager, and Derek Ogniewski! Next up for them is the Pepsi Tournament in Glens Falls.

Saratoga Wilton Youth Baseball
8u All Stars
The boys earned a bid to the State Tournament by going 3 - 2, on the strength of a stout defense that allowed the fewest runs of any team in the District Tournament.  Their State campaign begins on Friday in Queensbury.
9u All Stars
The boys on the 9u team won their second consecutive District Championship.  Shut down pitching and live bats took the boys to a 5 - 0 record in the District Tournament.  Their State Tournament begins in North Colonie on Thursday.