Off to D.C.: Local Student to Work with U.S. Senate

SCHUYLERVILLE – One local student will soon be off to D.C. for the opportunity of her high school career.

Freya Birkas-Dent, a junior at Schuylerville High School, will begin a three-week position in the competitive and prestigious United States Senate Page program on June 11, which will run until June 30. Birkas-Dent will be sponsored by N.Y. Senator Chuck Schumer, and was one of only 30 students from across the country selected for the program.

Her responsibilities during these three weeks will include administrative tasks, such as filing paperwork and delivering documents and mail between offices. The program will also involve time in the Senate Chamber, during which pages will be responsible for arranging papers at each seat and holding doors, according to Birkas-Dent. She will also be attending page school, to “l earn about parliamentary procedure and the legislative process,” according to the Schuylerville schools website.

Birkas-Dent first became aware of the Senate page position while reading a book written by former Senate Majority Leader Tom Daschle, in which he references pages as the people who perform various administrative tasks for the Senate. This interested her, and she began researching the position by visiting the websites of some of her Senators.

She first got in touch with the offices of N.Y. Senators Chuck Schumer and Kirsten Gillibrand, inquiring about page positions for the spring or fall, as she initially wanted to apply for one that would happen during the school year. Finding that neither Senator had available positions for those sessions, she applied to a number of Senators from different states, including Susan Collins of Maine and Claire McCaskill of Mo. This too failed to yield fruitful results, as she said that Senators prefer to sponsor pages from their own constituencies. Finally, Senator Schumer came through with a page position for the summer, which she accepted.

“I’m really interested in going into international relations or into government,” Birkas-Dent said about what inspired her to pursue a position like this. “We learn about this kind of stuff in the classroom, but you really don’t have a tangible experience with it. It’s kind of shrouded in secrecy what actually goes on there, so I don’t feel like I have a good understanding of exactly how it runs on a day-to-day basis.”

Birkas-Dent believes this position will give her the sort of understanding of the legislative process necessary for her to decide if it is a career path that she would like to follow. Some of the careers she has considered for herself include elected official, diplomat, or possibly working with a non-profit doing international relations work. Whatever career she ends up pursuing, she knows that she would like to go into the Peace Corps after college.

“I think the U.N. [United Nations] would be really interesting to be in,” Birkas-Dent said. “But I think it’s hard to get into as an American. So I’ve kind of branched out.”

Back at home, Birkas-Dent is involved with a number of groups and programs focused on environmental preservation. She is the president of the high school’s Environmental Club, and works with the Hudson River Community Advisory Group, which works on various things including dredging and floodplain sampling. She is also the captain of her school’s Climate Leadership Team, and with that group recently attended the Adirondack Youth Climate Summit. While environmental issues are important to her, she said that were she to get involved with politics in the future, they would likely be a side issue for her and not a core part of her hypothetical platform, given the divisive conversation surrounding such issues.

“I’m very excited,” Birkas-Dent said about beginning her new position. “I’m excited to meet people from all over the country. It’s a little bit nerve-wracking cause we don’t know yet what we’ll be doing exactly, but I think it’ll be a good experience and I’m really looking forward to it.” 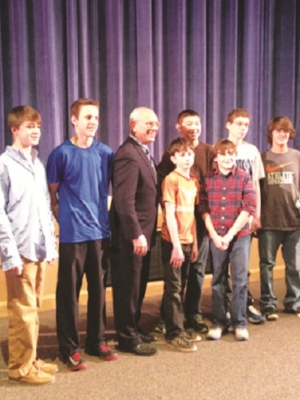