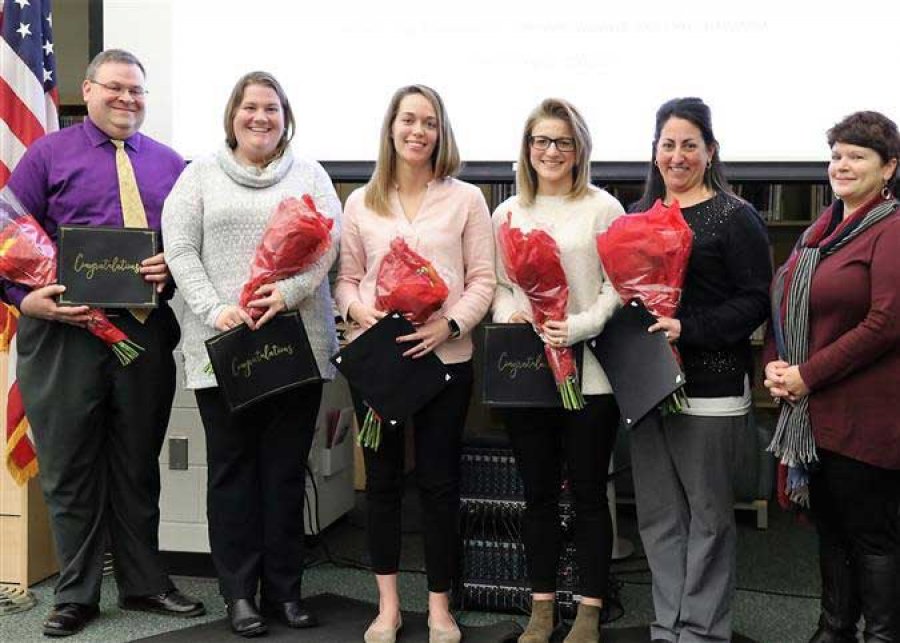 BALLSTON SPA — The Ballston Spa Central School District’s Board of Education recently recognized those staff members who have earned National Certification in their respective professional roles and expressed congratulations on behalf of the school community.

Jessica Lamb received National Board Certification in Special Education. She currently is a Special Education Teacher who works with the students and families at Gordon Creek Elementary School.

Reid Keefe received National Certification as a School Psychologist. She currently works with students and families at the Ballston Spa High School.

Christina Carlson recently joined the school district as a Guidance Counselor specifically working with the students in the district’s Clean Tech Early College High School. She received her National Board Certification in School Counseling.

SARATOGA SPRINGS — Jean Fei, a longtime community advocate for diversity and sharing resources, will facilitate “Making the Invisible Visible,” an interactive three-part workshop on Monday, Jan. 20 from 9:30 a.m. - Noon. The event will be held at the Susman Room, Saratoga Springs Public Library (across from the Children’s Library).

“Our goal is to increase social awareness, sensitivity and education about poverty, racism, and discrimination in our own community,” says Beverly Lazar-Davis.

All attendees are invited to participate in each stage: drawing and describing poverty, the ten chairs of wealth and the web of power. We will brainstorm solutions to the issues we have learned about and provide resources for youth to create social change for a brighter future. Families, adults, teens, and children (9+), who have a willingness to participate in an interactive, educational and gentle program are welcomed.

SARATOGA SPRINGS — Soroptimist International of Saratoga County (SISC) announces the availability of $24,000 in grant funding for organizations that support the needs of women and girls in Saratoga County. These awards, given by the club each year, should provide women and girls with access to the education, training and support they may need to improve the quality of their lives.

In order to qualify, candidate organizations must reside in or serve the needs of citizens of Saratoga County. Grants are typically awarded for programming, start-up, or capital projects. Consideration will be given to the number of people served. Individual endeavors such as pageants and competitions cannot be funded.

For a grant application, visit the SISC website at www.soroptimistsaratoga.org.

Applicants should send their completed application to This email address is being protected from spambots. You need JavaScript enabled to view it., deadline is Jan. 31. 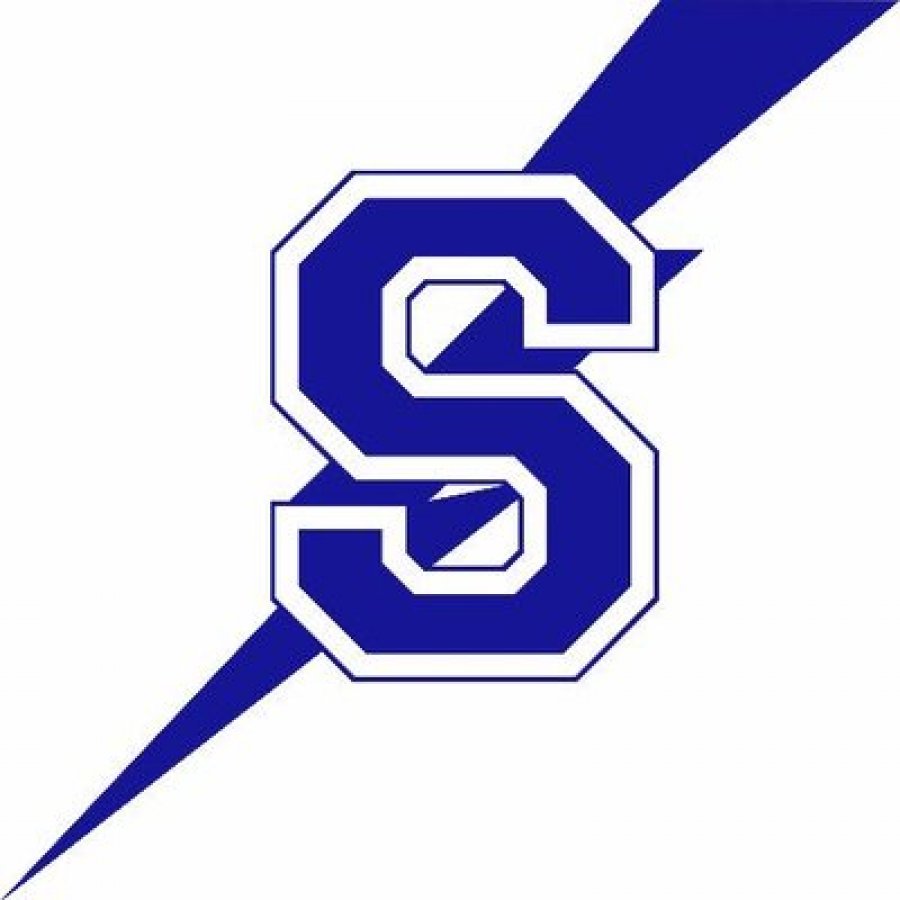 SARATOGA SPRINGS — Come see one of Saratoga’s top-rated independent schools.  Saratoga Independent School (S.I.S.) is hosting an Admissions Open House on Wednesday, January 22 at 9 a.m.  During the open house, prospective families will have an opportunity to meet Lisa Brown, Head of School, as well as other faculty and staff.  Ms. Brown will welcome families and provide a brief history and overview of S.I.S.  Members of our faculty will take families on tours of our campus, allow them to observe classes, and answer questions about the school.

Founded in 1991, Saratoga Independent School is fully accredited by the New York State Independent Schools Association and chartered by the New York State Board of Regents.  This year, the school serves 150 students in grades prekindergarten through eighth, residing in 13 different school districts. Enrollment for the 2020/21 school year has begun and prospective families may contact the school at 518-583-0841 or This email address is being protected from spambots. You need JavaScript enabled to view it.. 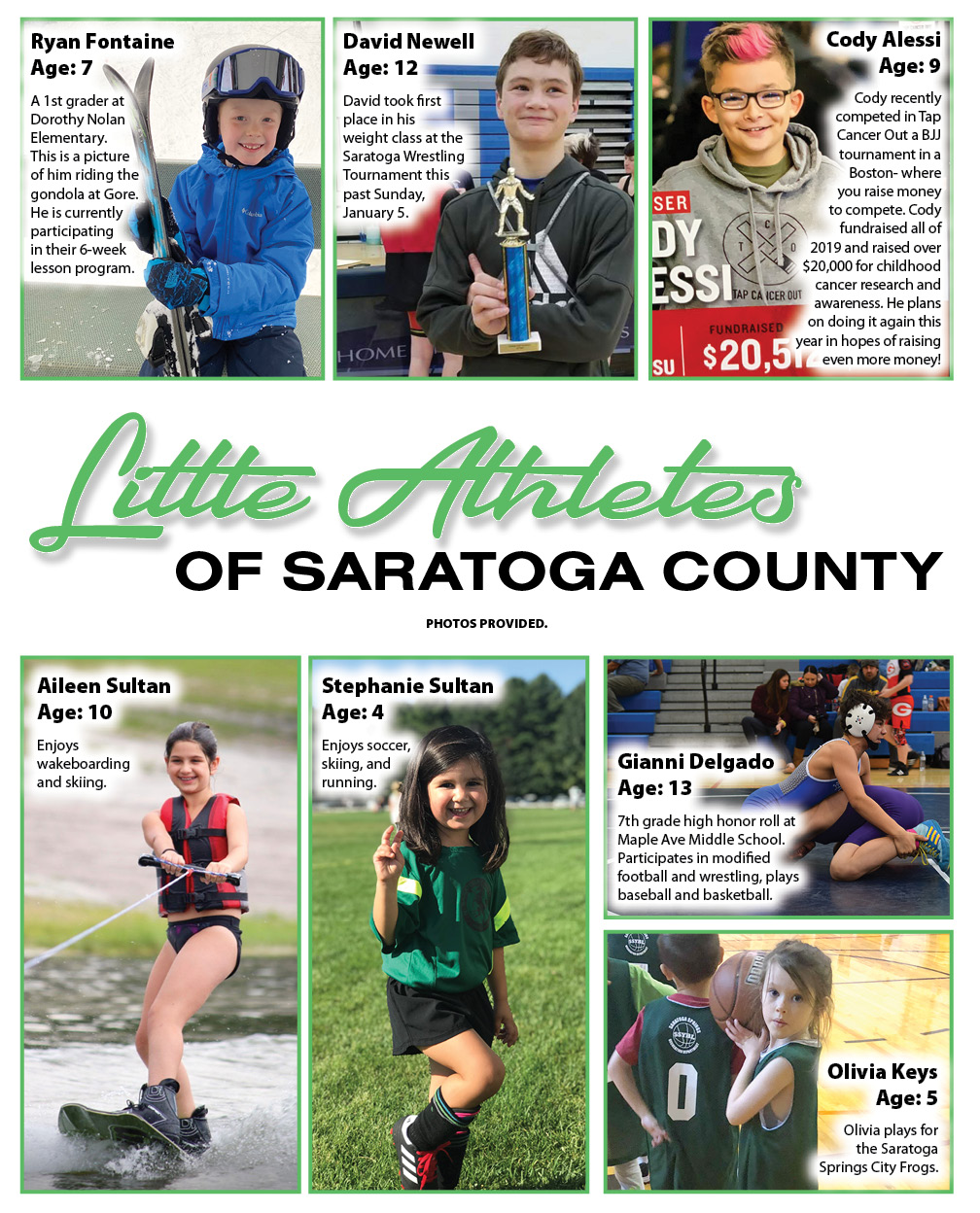 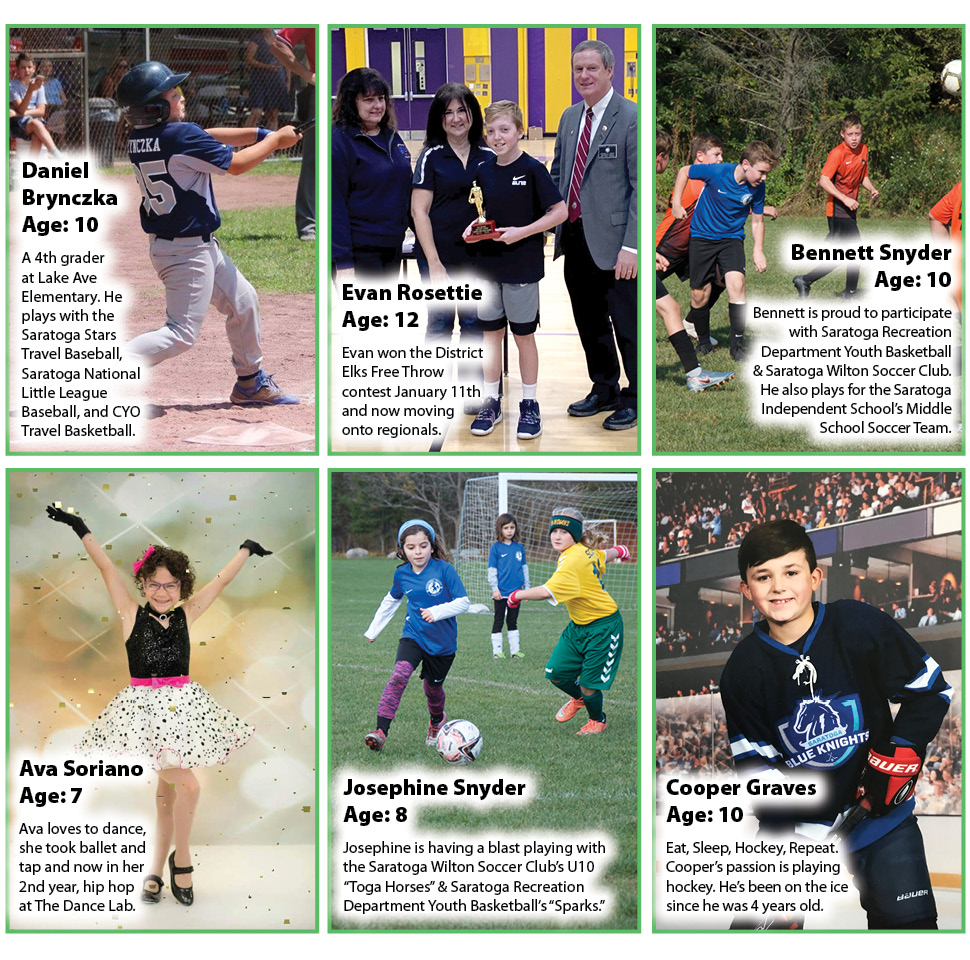 Athlete of the Week: Nick Palso

Nicholas Palso, a junior at Ballston Spa High School, has just had his 100th win and recently won at the Saratoga Invitational. Palso is currently 25-2 and wrestling in the 106 bracket.

Palso has been wrestling on varsity since 8th grade after only spending one season before on modified.

“Our team is doing great this year! I’m surprised at how well we’re doing,” he laughed.

“I was thinking we wouldn’t be as good as we are but the guys I’m wrestling with are really good.”

Their team is young, so expectations weren’t too high at first.

“We have a lot of freshmen,” Palso clarified.

Palso doesn’t think anything about wrestling is hard, even the eating to maintain his weight, which he maintains by eating “mostly chicken” and by working out.

He does admit to missing desserts and can’t wait to indulge in his favorite ice cream, mint cookie crumble from Stewart’s, once the season ends

Palso was immersed in the sport through going to some of the home matches when he was younger with his dad; his grandfather also wrestled.

“At those matches, I fell in love with the sport,” he said.

Palso does not play anything else, focusing solely on wrestling and in the off season he trains and lifts to stay in shape.

He still manages to keep up on his schoolwork by doing his homework before and after practice, whatever it takes as he would like to attend college and wrestle at a collegiate level also.

In his free time, he hangs out with his friends and they play video games.

He cites his dad, Nicholas Sr., as his biggest supporter, “he’s always at my matches and is always the one who brings me to my practices and tournaments.”

Palso is appreciative of his coaches and his teammates.

“My coaches are great, they’ve helped me get through some good and bad times,” he said.

BALLSTON SPA — Ballston Spa High School’s FIRST Robotics Team #3044 and FIRST Tech Challenge Team #6945 recently hosted a Hudson Valley FIRST LEGO League (FLL) Qualifying Tournament. Eight FLL teams participated in the tournament. The first-place winner was the BroBots team from Christian Brothers Academy in Albany. They will be moving on to the Hudson Valley FLL Championship Tournament on February 8, 2020 at Dutchess Community College. Other teams that received awards at the tournament include: • Robot Design Award & Robot Performance Award (BSpa Beasts from Saratoga County 4-H) • Project Award (Motors in Action, Wood Road Elementary) • Core Values (Bionic Builders, Ballston Spa Middle School) This year’s FLL challenge, City Shaper, required students to design a LEGO robot that was programmed to operate independently on the competition table and accomplish several design and construction related tasks. The teams were judged based on the robot’s performance, design, core values and on a project. The theme of this year’s project asked students to think like architects, engineers and construction workers to identify a problem with a building or public space in their community and design a solution to the problem. The tournament was sponsored by Hudson Valley FLL, Dutchess Community College and their Foundation, IBM, and NY Tech Valley FIRST. FIRST programs are growing in New York Tech Valley as a result of the overwhelming support of our industry sponsors to engage more students in Science, Technology, Engineering and Math (STEM) and develop the needed workforce to support their businesses. Sponsors for New York Tech Valley include GLOBALFOUNDRIES, GE, ASML, National Grid, KLATencor, Rensselaer Polytechnic Institute, Lam Research, Applied Materials, AMD, Turner Construction, SCREEN USA, nfrastructure, Edwards, Regeneron, Pickett Family Foundation, Acumetra, Tokyo Electron and Westerwood Global. Additional information is available by contacting Ballston Spa K-12 Science Coordinator Diane Irwin, This email address is being protected from spambots. You need JavaScript enabled to view it., or at the High School by calling 518-884-7150.

BALLSTON SPA — The Ballston Spa Central School District is currently enrolling students for its Universal Prekindergarten Program for the 2020-2021 school year. An eligible child is a child who resides within the school district and who is four years of age on or before December 1, 2020. A child who is age-eligible to attend kindergarten is not eligible for the UPK program. Agencies that provide the Universal Prekindergarten Program for the district are the YMCA Malta Childcare Center, the Saratoga County Equal Opportunity Center Head Start program at Gordon Creek Elementary School, and the Ballston Area Community Center. To apply to enroll a child at the YMCA Malta Childcare Center, contact Jenna Graber at 518-583-4342. To apply to enroll a child at the Saratoga County EOC Head Start program, contact Lina Sanchez at 518-884-7270, ext. 3484. To apply to enroll a child at the Ballston Area Community Center, contact Kathi Leigh at (518) 885-3261, ext. 16. The application packet is available on the BSCSD website or through the UPK agencies. The application deadline is January 31, 2020. Parents/guardians will be notified in writing at the end of February of placement decisions. For any other questions regarding the program, please contact the Ballston Spa Central School District’s Office of Curriculum, Instruction, and Assessment at 518-884-7195, ext. 1330. For additional information, visit the district’s Universal Prekindergarten Program webpage via www.bscsd.org

Published in Education
Tagged under
Be the first to comment!
Read more...
Page 7 of 44