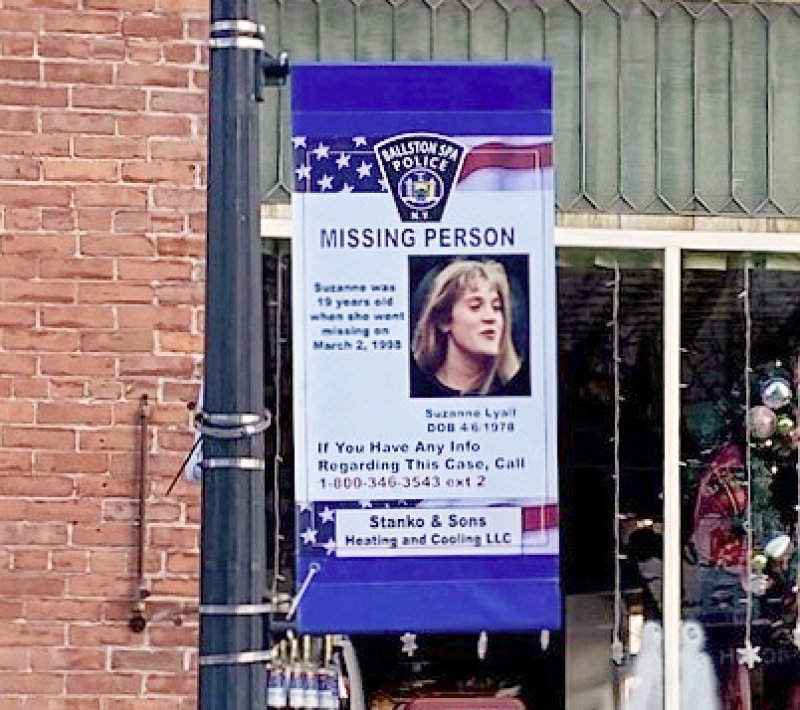 Banner in Ballston Spa portraying Suzanne Lyall, who vanished without a trace in 1998. Photo by Mark Blech.

BALLSTON SPA — Mary Lyall has faced many agonizing decisions since receiving the news that her cherished 19-year-old daughter Suzanne had vanished without a trace in 1998.

New York State Missing Persons Day events, which prior to the coronavirus had taken place in Albany on or near Suzanne’s April 6 birthday each year since 2001, had earned accolades for bringing friends and relatives of legions of missing persons together to reflect, remember and provide mutual support.

The cancellations of gathering for the event due to COVID weighed heavily on Lyall, who is director of Ballston Spa-based Center for HOPE (Healing Our Painful Emotions).

Forging a collaboration with Just Mark Blech - who was commencing work on a community arts exhibit honoring First Responders, created “family-friendly” banners that would call attention to more than a dozen unsolved cases, including that of Suzanne Lyall, who graduated with the BSHS Class of 1996 before being abducted from her SUNY/Albany college campus two years later.

The pair sought to strike a balance between including a photo of each person as he or she looked around the time of his or her disappearance and few key facts about each criminal justice mystery on a banner, while at the time taking as much care as possible to be sensitive to the feelings of those who would be viewing the outdoor exhibit along parts of Front Street and Milton Avenue.

The banners are displayed throughout Ballston Spa and depict first responders as well as about 15 banners which depict missing persons. They will be on display through the spring, Lyall said.

More in this category: « JMP Interiors Awarded Best Of Houzz 2021 It’s That Time of Year: Valentine’s from Impressions | Saratoga Candy Co »
back to top