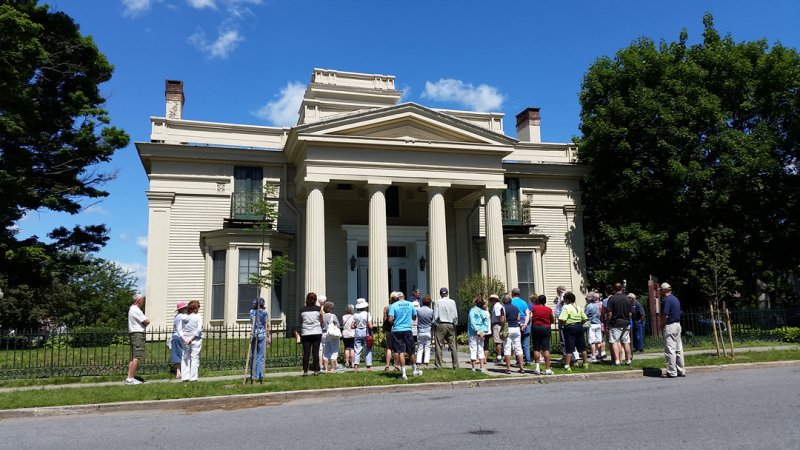 Along the Franklin Square Stroll, which kicks off the first of 13 strolls offered by the Saratoga Springs Preservation Foundation. Photo provided.

SARATOGA SPRINGS —The Saratoga Springs Preservation Foundation has announced that this year’s strolls will start on June 13. The historic walking tours will be offered at 10:30 a.m. every Sunday through Sept. 5 in various neighborhoods throughout the city.

The first of 13 tours of historic Saratoga Springs kicks off with “Wealth & Wellness: Franklin Square Summer Strolls” led by NYS Assemblywoman and former SSPF Executive Director, Carrie Woerner. This Summer Stroll highlights historic Franklin Square, and home to some of the oldest private residences in Saratoga Springs.  This tour meets at the northwest corner of Division Street and Broadway.

On Sunday, June 20, the tour “Down in the Valley: Exploring the Gut” returns after five years. New tours highlight the mineral springs of downtown and mail-order houses on the east side, as well as popular tours of North Broadway, the Saratoga Spa State Park, the historic West Side, among many others.

All Sunday morning tours last approximately 90 minutes and require walking and standing on varied terrain. Tours will be limited to thirty and tickets must be purchased in advance.  The cost per tour is $15 for SSPF members and $20 for non-members.  Members who have received complimentary Stroll passes will have those honored for their value of $10 and will be required to pay the difference of $5.

For details about the strolls and more information, go to: www.saratogapreservation.org.

More in this category: « Heart Hero Brookside Reopens with a Bang! »
back to top